The Superdome: monument to a rotten system 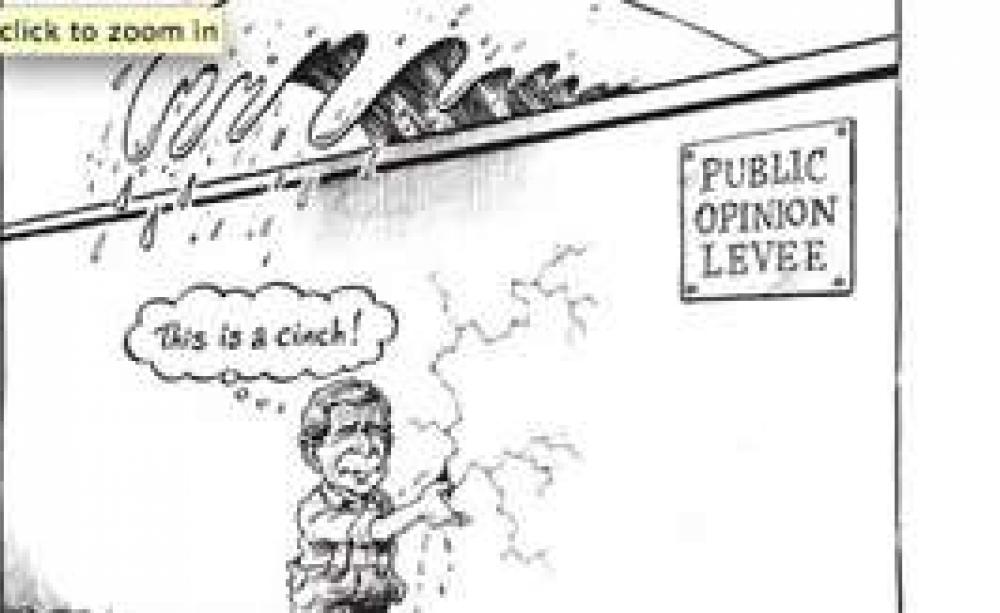 People in the US deserve better than living under a system that weeps over spilled oil
and rolls its eyes at our spilled blood.

There is nothing 'unnatural' about the disaster of New Orleans. When politicians smirk at global warming, when developers look at our wetlands and dream of mini malls, when billions are flushed in the name of war and tax-cuts, when issues of poverty and racism don't even register in Presidential debates, all it takes is wind - albeit 145 mph wind - to expose a sturdy superpower as a house of cards. Nowhere is this exemplified more painfully than in a monument to orporate greed that has rapidly become the earth's most damnable homeless shelter, the Louisiana Superdome.

The Superdome is perhaps the most unintentionally appropriate name since Mr and Mrs Cheney looked at their newborn son and said, 'Dick'. It was birthed in 1975 with pomp and bombast, as the largest domed facility in the world. It was also funded entirely on the public dime. In a case of brutal foreshadowing that would shame a B horror flick, the dome was constructed on an old cemetery for the poor. The burial grounds were dug up and discarded with a promise that the Superdome would the centrepiece of a New Orleans 'Central Business District' that would benefit all.

The results are certainly now in plain, ugly view. In one week this August, 25,000 people walked through its doors, many for the first time. They entered a stadium where tickets go for 90 bucks a
pop, season passes cost $1,300 and luxury boxes can run for as much as $109,000. The arena boasts of having a capacity that can comfortably seat 72,000 people, with 9,000 tons of air conditioning,
and 88 massive restrooms. But for the 25,000 who can't afford the oxygen, there has been no air conditioning and the bathrooms have had no electricity, running water, or working toilets. Faeces
and garbage now pack the upper decks.

The traumatized people finally emerged to tell of dead bodies on the 50-yard line. One man even committed suicide, throwing himself off the upper deck. When asked if it could hold the storm or the flood, Democratic Governor Kathleen Blanco called the Superdome shelter
strategy an 'experiment'.

Saints' receiver Joe Horn has looked at the place where he has set receiving records and said that football couldn't be farther from his mind. 'It's devastating to us. I've cried three or four times. Seeing
kids without any food, elderly people dying and the government saying that help is on the way - that's the most shocking part.'

He's right. That is the most shocking part. Leading this carnival of disgrace is 'Mr Shock and Awe' himself, George W Bush. Everyday, President Bush doles out comments that signal his removal from
any basic notion of humanity. Perhaps, the most galling: 'The good news is - and it's hard for some to see it now - that out of this chaos is going to come a fantastic Gulf Coast, like it was before. Out of the
rubbles of Trent Lott's house - he's lost his entire house - there's going to be a fantastic house. And I'm looking forward to sitting on the porch.'

But happy visions of mint juleps with Trent, while Mamie and Prissy
tighten Scarlett's corset, just will not sell. The discussion instead, from right wing editorial pages in New Hampshire and Mississippi to an vocal, angry, Civil Rights community, is about the racism, profiteering and vile hypocrisy at the heart of this system.

As Norman Solomon wrote: 'The policies are matters of priorities. And the priorities of the Bush White House are clear. For killing in Iraq, they spare no expense. For protecting and sustaining life, the cupboards go bare. The problem is not incompetence. It's inhumanity, cruelty and greed.'

Frederick Douglass said it even better a century ago in his speech, 'What to the Slave is the 4th of July?' '[Y]our national greatness, swelling vanity; your denunciation of tyrants, brass-fronted impudence; your shouts of liberty and equality, hollow mockery;
your prayers and hymns, your sermons and thanksgivings, with all your religious parade and solemnity, are, to Him, mere bombast, fraud, deception, impiety, and hypocrisy - a thin veil to cover up crimes which would disgrace a nation of savages.'

I would amend the great Mr Douglass just to say that we are not at present a nation of savages.

The unreal outpouring of both aid and the furious call for answers are not the actions of beasts. But it is now clear that savages rule our lives. The echoing cry from the Gulf Coast is that we deserve better than living under a system that weeps over spilled oil, and rolls its eyes at our spilled blood.

This article first appeared in the Ecologist October 2005