Armed with banners demanding ‘Climate Justice Now!’ more than 2,000 villagers marched to the Coca-Cola bottling plant in Mehdiganj in northern India earlier this week calling for it to be closed down.

They accuse the company of over-extracting groundwater, lowering the water tables and leaving farmers and the local community unable to dig deep enough to get to vital water supplies.

Since the bottling plant was opened in 2000, water levels in the area have dropped six metres, and when a severe drought hit the region earlier this year the crops failed and livelihoods were destroyed.

‘What is more important,’ asked local activist Nandlal Master, ‘meeting the water needs of a community and farming or mass producing Coca-Cola from depleting groundwater resources?

‘The answer to us is clear, and Coca-Cola has to go,’ he said.

The Mehdiganj dispute is just one of many taking place all over India. In fact two Coca-Cola plants have already been closed down after local opposition over water supplies.

However, not all such disputes are as simple as ‘corporate giant versus local community’. What they do have in common, according to Tom Palakudiyil of Water Aid, is that it is ultimately the poor who lose out.

‘What we have seen happening with Coca-Cola has been happening all over the country, largely between the well-to-do and the not-so-well-to-do.

‘The richer side is able to acquire powerful pumps and extract more and more water with no limits.

‘In the case of big corporations like Coca-Cola, or other big industries that have a lot of power over the local government, they are able to get their pipelines to bypass the villages altogether,’ said Palakudiyil.

Patrick McCully from International Rivers agreed. He says the situation has become a dangerous ‘free for all’.

‘There’s no regulation whatsoever, so anyone is free to shove a pipe in the ground,’ he said.

Sitting at the bottom of the pile in all these disputes are the small-scale farmers. Without adequate water supplies the 70 per cent of Indians who make their living from agriculture have nothing. 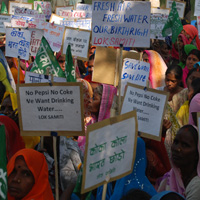 The Bundelkhand region in northern India is a typical example of what happens when the water runs dry. Although never a lush region, the area has now completely lost the ability to sustain small-scale agriculture.

Tom Palakudiyil from Water Aid said that without a livelihood villagers have migrated to the cities, adding to existing urban problems and often their own poverty.

‘If you re-wind 30 years ago they were not affluent but they were self-sufficient on two meals a day. Now they are migrating into a world of poverty in the cities.

‘The reliability of water has gone for them,’ he said.

According to Dr David Molden from International Water Management Institute in Sri Lanka (IWMI) many thousands of villages that are unable to get water even from tankers have been abandoned completely. And if they haven’t yet been abandoned they are a potential site of conflict.

‘The problem is that so many people are dependent on groundwater for farming. It is critical to their day-to-day life. People get very emotional about it,’ said Molden.

India’s rising population and changing diets are also exacerbating the problems of water scarcity. Rapidly growing cities are taking more water supplies away from smaller villages and demand is growing amongst the middle-classes for water-intensive produce like sugar and meat.

‘Water-thirsty crops like sugarcane are the last thing farmers should be growing in many of these water-scarce areas,’ said Palakudiyil.

In addition to the existing problems of over-extraction, mismanagement and rising demand there is also the imminent threat of climate change. Its impact will initially be on surface water but groundwater supplies will eventually be affected too.

‘The dramatic impacts in India and South-East Asia will come from the melting of Himalayan glaciers. It will lead to huge variation in water supplies - some decades of swelling rivers and floods and others of severe drought,’ said McCully of International Rivers.

McCully sees an increasing risk of both regional and cross-border conflicts over water resources unless better regulation and management is introduced.

‘Many states in India are already in dispute over water rights – it’s been going on for decades,’ he said.

Plans for more hydropower projects like the Farakka Dam, which diverts water from the Ganges River to Calcutta, are strongly opposed by Bangladesh, which lies downstream.

The scale of the problem was highlighted by a World Bank report published last week. It said that under current practices, one-third of the world’s population would have access to only half the water they need by 2030.

The report said that $50 billion must be invested annually by governments and business in water management projects. Coca-Cola, which uses enough water every day to meet the world’s drinking water requirements for 10 days, backed the report’s findings.

However, water resource management does not yet exist in India, according to McCully from International Rivers.

‘There is no regulatory structure or political will to enforce regulation. Water is poorly managed all over the world but especially in India,’ he said.

Amit Srivastava of the India Resource Centre says water-intensive coal, steel and mining industries continue to be funded by the same overseas investors that are preaching better water management. The World Bank, he said, was a case in point.

‘A just policy should make sure that these industries that over-exploit our resources are not allowed to happen in areas of drought. The needs of the farmers and local communities should be first and foremost,’ he said.