How green is your university? 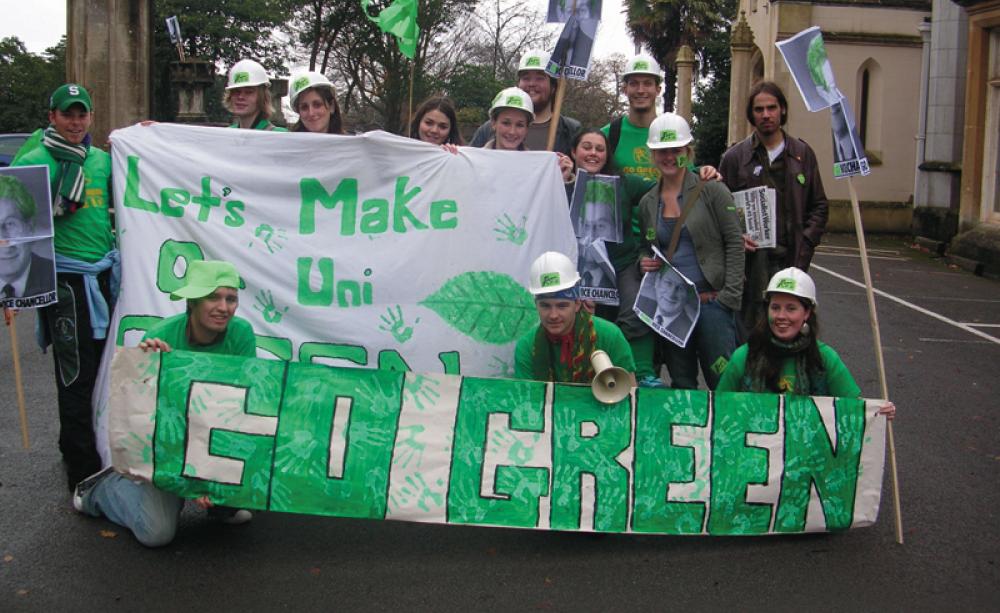 From ‘First’ to ‘Failed’, student activist group People & Planet has created a new way of ranking the UK’s universities – according to their environmental credentials.

The phenomenal growth of student activist organisation People & Planet (P&P) over the past few years reveals an active student movement, campaigning to end world poverty, defend human rights and protect the environment. The P&P network, the largest of its kind in the UK, now covers 70 per cent of Britain’s universities and 10 per cent of sixth forms.

But what about the institutions themselves? Britain’s universities and schools have a huge environmental impact – one that could and should be massively reduced. The UK higher education (HE) sector emits three million tonnes of CO² into the atmosphere every year, and is responsible for more than a million journeys daily. Schools emit 9.3 million tonnes of CO² per year, and that’s not counting the 1.2 million tonnes of CO² emitted by people travelling to school by car.

With many universities leading the research on the environmental threats facing our planet, it’s common sense that they also lead in lightening their own footprint.

Which is why this is an area that P&P focuses on. Its ‘Go Green’ campaign aims to cut carbon in colleges and schools. ‘The campaign excites students because it’s very accessible. They can directly impact their university,’ says Bronwen Smith-Thomas, P&P’s climate change campaigns officer.

In February 2008, 39 university, school and college groups staged campus actions as part of National Go Green Week – the UK’s first national student week of action and events against climate chaos. In February 2009, the number of groups campaigning during Go Green Week increased to around 70. The focus is on institutional change; the aim is to reduce carbon emissions. Actions vary, from question times with MPs, political candidates and campus vice-chancellors to simple awareness-raising activities such as running a stall during a break or lunchtime.

One way used to grab people’s attention – students and staff alike – is to encourage students to sign Valentine’s Day cards (provided by P&P), which are then sent to the vice-chancellor or whoever needs to see it. The overall message: ‘Fall in love with your climate’, coupled with specific requests for action. It’s certainly a novel way to put the pressure on.

There are signs that universities are getting the message, if People & Planet’s 2008 Green League Table is anything to go by. Sponsored by WWF, it ranks all 129 British universities, awarding them a First, 2:1, 2:2, Third or Fail, based on nine environmental criteria related to both policy and performance. It incorporates data obtained from the Freedom of Information Act, including the percentage of waste recycled and CO² emissions.

The 2008 table shows dramatic improvements. ‘The first year (2007) was a real wake-up call for the sector,’ says Smith-Thomas. ‘We saw a big improvement in 2008, with lots of universities adopting new and revised environmental policies, and employing more environmental staff. We’re hoping to see an improvement this year too.’

There’s nothing like being ranked to enhance performance. The 2009 Green League Table will be published in June. Find out how to kick-start a campaign by downloading People & Planet’s ‘Go Green’ action guide from its website, see www.peopleandplanet.org