All carbon is not born equal 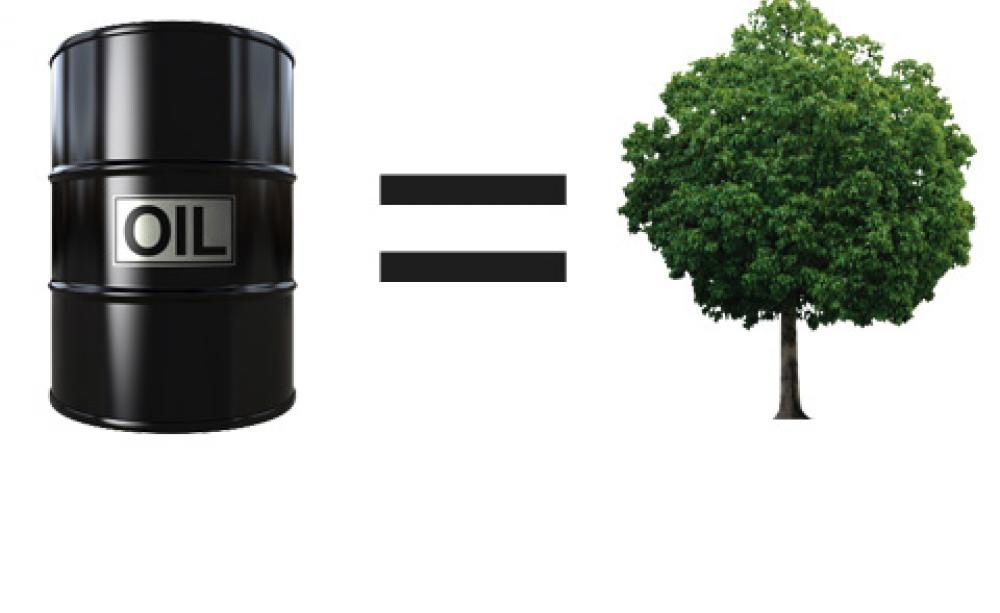 Ranil Senanayake has never been content trying to influence those at the policymaking table – or even sitting at that table himself.

Instead, the maverick systems ecologist has tried to construct a new table altogether. He set about this by crisscrossing the globe in search of farming communities willing to adopt and be trained in 'analog forestry', a land restoration system he first began developing in the early 1980s in the upland hills of his native Sri Lanka.

The principles behind analog forestry are simple, and spring from the understanding that natural forests are some the most productive, and diverse, ecosystems on Earth.

Analog forestry sets out to mimic the original ecosystems, with subtle adjustments that mean they can be economically productive as well - yielding food and shelter as well as maintaining habitat in ways that will be familiar to those who have studied or who practice permaculture. The scheme also tries to strengthen rural communities, recognising that forests are their homes and livelihoods.

From tree to desk

Despite his preference for field work, Senanayake has frequently found himself counseling the international community when it comes to discussing how carbon is stored within living organisms – first as an adviser to the Australian Government and then to the World Bank and UN.

The reasons that governments are so interested is simple: if natural carbon sinks such as forests and soils could be managed to increase their uptake of carbon, nations would have much less trouble hitting greenhouse gas reduction targets. In turn, governments from forested nations know that any trade in carbon sequestered by forest ecosystems might offer huge funding potential for forest conservation.

All that was needed to light the fuse on this lucrative scheme was some science to prove that 'biological' carbon cycled through ecosystems is substantially similar to the carbon that comes from our use of fossil fuel. This is where Senanayake came in.

Moreover, Senanayake warned that the economic credibility of carbon sequestration rested upon recognising two distinct sources of carbon - biological or biotic carbon that cycles through living systems via photosynthesis and respiration - and geological or fossil carbon, which is an effectively permanent removal from that biotic cycle, at least on timescales affecting climate change. The two would have to be priced separately, he said, with fossil carbon eliciting a far higher price.

'This was school kid level science,' Senanayake said to me when we met recently in an Amsterdam hotel lobby. 'Fossil carbon - which has been locked up for tens of millions of years - cannot be treated the same as carbon from biotic sources lasting at most a few tens of thousands of years.'

His words fell on deaf ears. What became known as 'land-carbon sink' mitigation found its way into the 1997 Kyoto Protocol, but not before Senanayake gave a presentation at a World Bank meeting in Washington in which he pointedly accused those gathered of committing environmental fraud.

'I told them, "what you’re talking about is carbon laundering",’ Senanayake recalled. But those assembled – including vice presidents and executive directors of the World Bank, United National Environmental Programme and United Nations Development Programme - didn’t want to hear the message.

Fast-forward to 2009 and forest carbon now stands centre stage in negotiations leading up to the Copenhagen climate talks. Evidence is growing that natural carbon sinks might be weakening faster than previously thought, and yet prospects look good for a deal on a new funding mechanism, known as Reduced Emissions from Deforestation and Forest Degradation (REDD).

REDD is based on the deceptively simple concept of paying landowners to keep trees standing. By putting a price on the carbon sequestered in trees it makes better financial sense to preserve the trees rather than eradicate them.

The money for REDD would come from carbon credits sold on the anticipation of reduced carbon emissions to the atmosphere.

In theory, REDD could generate billions of dollars a year for reducing forest loss in the tropics, where deforestation accounts for about 20 per cent of global greenhouse gas emissions.

'Avoiding deforestation is about preventing a source of emissions, rather than creating a sink, which is why those previously skeptical of forests in the run-up to Kyoto are now in favour of this,' said Jutta Kill, a climate campaigner monitoring REDD negotiations for The Forests and the European Union Resource Network (FERN).

Skeptics like WWF were also won over by emerging guidelines such as the Climate, Community & Biodiversity (CCB) Standards, improvements in GPS monitoring and computer mapping of deforestation, and proposed accounting methodologies measuring reduced deforestation on a national rather than project level basis.

Does anyone know how to plumb a sink?

It’s now clear that primary forests in the tropics are net sinks taking up carbon, as are temperate zone forests extending up into the boreal regions. According to recent research, tropical forests have an annual global uptake of around 1.3 gigatonnes of carbon – equivalent to approximately 15 per cent of the total global anthropogenic carbon emissions.

But NGO groups like FERN and Friends of the Earth insist there remain huge inaccuracies in measuring forest carbon and argue against any kind of market linkage.

'The issue here is how you finance REDD,' said FERN’s Jutta Kill. 'If it is financed through carbon trading, then there has to be a common metric so that you can trade tonnes of fossil carbon released for tonnes of biotic carbon avoided [from avoided deforestation].'

That requires measuring the carbon stored in forests and then extrapolating that out to carbon not emitted at some future date. While accuracy has improved over the past decade, said Kill, these measurements are still performed by proxy (ie by measuring something other than the actual carbon saved, which is incredibly hard to calculate) and sometimes, when they are looked at more closely, lead to changes in estimated CO2 reductions of as much as 90 per cent, as Greenpeace recently reported in its evaluation of a highly touted REDD scheme known as the Noel Kempff Climate Action Project in Bolivia.

Does this measurement error matter? It does when you think what's at stake - allowing increased emissions from fossil fuels on the basis of these estimates.

Kill believes the risk is too great: 'Rather than fund the reduction of emissions through avoided deforestation, you actually buy the right to emit a tonne of carbon, meaning an overall increase if that tonne of emission reductions is not permanent or results in leakage'.

The threat from this risk - that developed nations may continue to blithely emit carbon dioxide because of a perceived equivalence between a tonne of fossil carbon and a tonne of forest carbon - has split the conservation sector.

Groups like FERN propose a voluntary fund that could be used to protect forests, essentially regardless of their carbon value.

Others, such as WWF and Greenpeace, propose a 'phased approach', in which forest carbon is eventually linked to carbon markets after plenty of capacity building and pilot project development.

Kill believes there are alternatives beyond the market, and highlights Norway’s proposed auction fund and her own group’s involvement with FLEGT, a program implementing EU forestry law now in effect with the Government of Ghana.

But market backers have their own arguments. Some point out that linking avoided deforestation schemes to markets need not mean instant mayhem: there are examples of projects outside of the Kyoto Protocol which have been designed and implemented with community program and landowner involvement to avoid carbon leakage.

Leakage occurs when local communities affected by a project aren’t given alternative livelihood options, resulting in deforestation shifting to another location outside the protected area.

Market supporters also maintain that there are all sorts of ways REDD can contribute to poverty alleviation, which is an underlying cause of deforestation, through sustainable agriculture, community forestry and promotion of indigenous land rights.

'I’ve spoken to a lot of indigenous groups who see this as an opportunity as well as a risk,' said Joanna Durbin, director of the Climate, Community & Biodiversity Alliance. 'But if you want to unlock greater sources of funding for reducing deforestation it’s hard to understand why you would not want to give it some kind of equivalency within the global emissions regime.'

Watching the REDD negotiations from his distant perch in the Sri Lankan hills, Ranil Senanayake still believes a financial link to fossil carbon offsets will snub out global warming mitigation efforts – irrespective of how well individual projects are managed.

He also points out that the sheer sums of money that could be made available through REDD are a sore temptation to cash-starved groups.

'You should understand what this is really all about,' says Senanayake, pointing to his own work with a voluntary carbon credit programme as an example of the funding potential REDD offers.

Although the the Dutch government has offered financial backing for an analog forestry restoration project on a Sri Lanka tea plantation, but for the most part his work has been a slow grind to establish a grassroots network of organisations, seed banks and training programs to individually spread the word from farmer to farmer.

Funding remains a supreme challenge. It’s why conservation groups are backing REDD and why he makes no apologies in promoting Analog Forestry as a carbon enhancing system distinct from what he terms 'traditional carbon-capture projects' which tend to be 'monocultural and industrial in nature'.

'You can’t block people off from their forests,' he says. 'It’s where they live and so you have to design systems where they can live and yet produce these other things that are economically useful.'

That means letting trees mature, says Senanayake, and it means recognising both natural and anthropogenic biodiversity, even when that might mean importing non-native species.

'Exotic species are essential quite often, but because they [the conservation community] haven’t separated these two clearly there’s still great confusion,' he warns.

As for REDD and the upcoming negotiations in Copenhagen, Senanayake had one piece of advice: put the right value on fossil carbon. Otherwise it’s all just carbon laundering.

Eric Marx is a freelance journalist