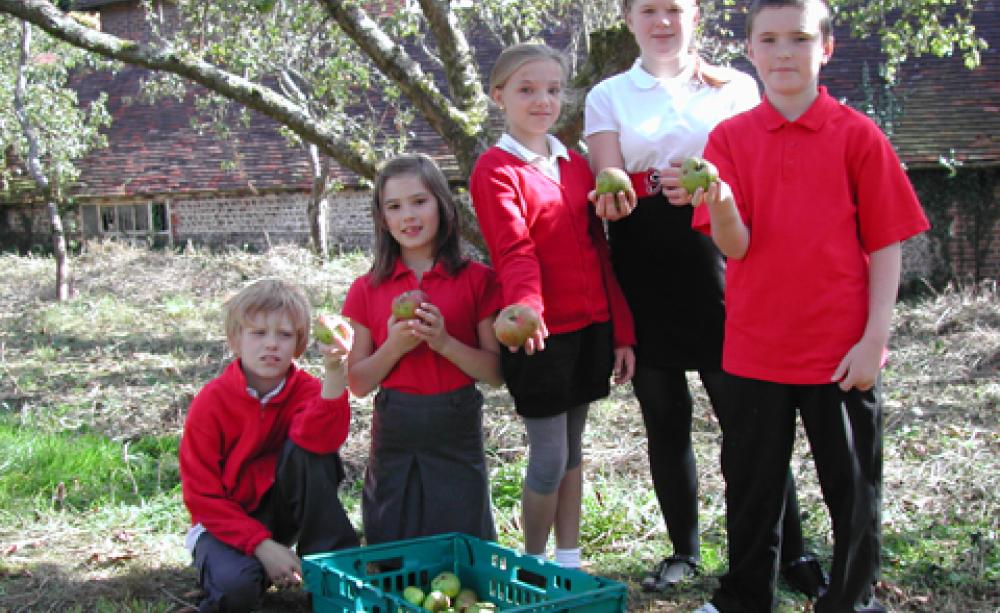 Tinsley Quince and Saltcoat Pippin are varieties of traditional Sussex apples which will be making a comeback in an exciting and innovative new Scrumping Project based in Brighton.

Scrumping has obvious connotations with young scamps nicking apples from Mrs Peterson's overhanging Bramley. Here it has more to do with collecting windfall from orchards, parks and gardens; processing them, then donating or selling it to the community.

The project is part of the only scheme of its kind in the UK: Harvest Brighton & Hove, a £500,000 Lottery-funded series of initiatives launched on Sept 21 and run by Brighton and Hove Food Partnership and Food Matters. Over the next four years they will encourage growing, cooking and eating of more locally-produced food.

Bryn Thomas, of Brighton Permaculture Trust which will run the Scrumping Project, told us more: 'We started a pilot this August. So we've collected around 100-150kg of fruit. Currently the apple juice is hand-pressed, unpasteurised and not bottled. We take a press to the schools and get the kids to use it themselves.'

With unpasteurised fruit juice having a shelf-life of only two days, the aim is more educational than simply nutritional. The project has £30,000 of funding for the next three years but Bryn will see it as a failure if by the end of the third year this isn't financially viable.

'We'd like to rent a workshop near Stanmer [Stanmer Park where the permaculture trust is based on the city outskirts] and next year start pasteurising and bottling the juice.'

This means getting a mill; crushing, mincing and then pressing the fruit before getting it up to 75 degrees Celsius and bottling it under the Scrumped brand! So how about distribution - Brighton has the well-known Infinity Organic Co-op, a shop and supplier.

'Infinity Foods are actually sponsors of our annual Apple Day at Stanmer Park (Sept 27) so yes that's a possibility. We'll be selling it in schools. The plan is to diversify into pickles, jams, chutneys and dried fruit. The orchards at Stanmer will be expanded.'

From next year Bryn and a team of around 90 volunteers (including unemployed people who will be free to take home produce) and five to 10 freelance staff will be working to a local map plotted up with all the people they've heard and collected from this.

The collections take place from July to October, November sees the processing, then the rest of the year is marketing. With 25 varieties of traditional Sussex apples, plus pears, damsons and plums, Brighton residents will be spoilt for choice.

And this is the reasoning behind the Harvest scheme as a whole. With our current globalised food system responsible for up to a quarter of carbon emissions, rising levels of obesity and food-related disease - localised food which is seasonal, healthy and unprocessed, is part of the solution.

Vic Else, director of Brighton and Hove Food Partnership, explained: 'This is the first time a whole city has tried to take an approach that combines on the ground support for projects with work at a strategic level - looking at how we can influence planning documents etc to include more space for food growing.

'As a society we need to explore ways of providing healthy food which doesn't impact negatively on the environment. Small scale food growing has a role to play in this and we know that residents of Brighton and Hove are interested in growing food and eating local food from the long waiting list for allotments.

'We are looking to reach out widely with this project so that all residents can take part - there are specific projects with focus on target groups and others that are for everyone.'

This translates as allotment schemes, legalised guerilla-gardening and more, as listed below:

• Allotment Projects
Increase the number and productivity of allotments. Develop small plots for new allotment holders, and bring back into use plots that have not been used in 60 years. Mentors to help novice allotment holders.
• Breaking New Ground
A project led by Food Matters, looking at how public spaces i.e. around housing estates or parks can be used more productively to grow food.
• Children's Growing Competition
4ft x 4ft wooden raised beds for children to grow vegetables on parents' or grandparents' allotments. Seeds provided and prizes awarded in different age categories.
• Demonstration Growing Gardens
The gardens sited in three public ally accessible spaces. As well as a resource for existing and new growers they will attract and introduce people to the idea of growing food.
• Garden Overhaul - Setting up productive gardens
A competition for gardeners to have their garden overhauled into a productive space. The garden would be designed and set up guided by organic and permaculture principles.
• Grow your neighbour's own
A volunteer matching scheme linking people who would like their gardens to be used for growing fruit or vegetables but don't have the time or physical ability with volunteers who would like to grow fruit and vegetables but don't have the space.
• Matchmaking Scheme
Surplus produce from allotments, shops etc distributed via the excellent, (national group) Fareshare to community food projects such as lunch clubs, cookery groups and homeless schemes.
• Training, mentoring and apprenticeship
Annual training programme that will be delivered by local organic fruit and veg producers and community cookery workers.

So there we have it, a necessary vision - vegetables growing in front gardens, herbs in window boxes, tomato plants on roof spaces, fruit trees around schools, housing estates, hospitals and offices - which if successful could well be a template for other areas.