Last Chance to See: Q & A with Mark Carwardine 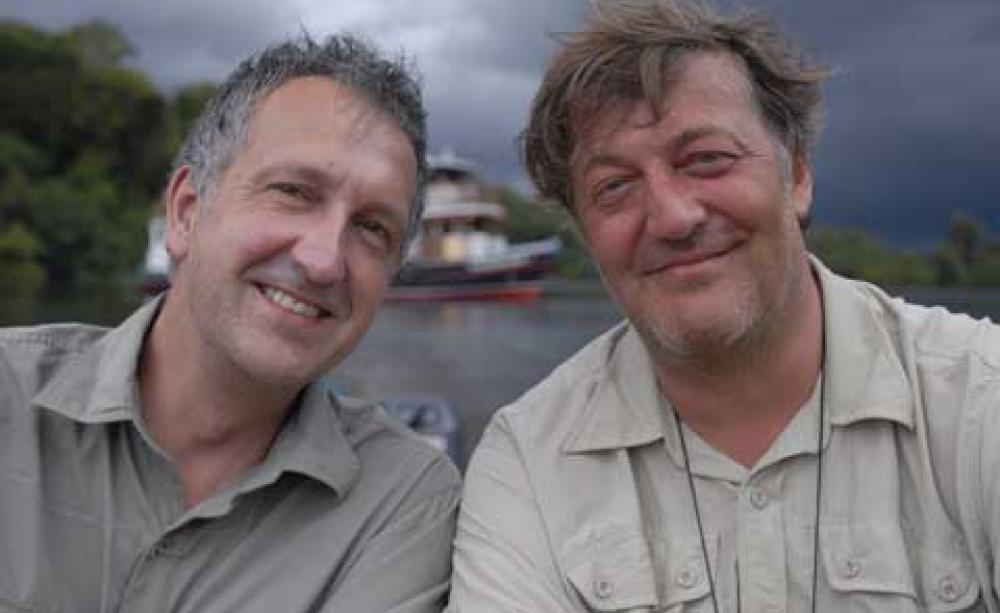 The manatee: not so much like a seal, as like a travelling case for carrying a seal

Talk about extinction and the discussion tends to revolve around charismatic species - tigers, polar bears, giant pandas or orangutans. But what about the thousands of less well-known creatures that face a similar plight?

One in four mammals, one in eight birds and one in three amphibians now appear on the The IUCN (International Union of Conservation of Nature) Red List, the world's most comprehensive inventory of the global conservation status of plant and animal species.

'Last Chance to See' is a new six part BBC series which follows Stephen Fry and naturalist Mark Carwardine in search of species on the edge of extinction in the hope that their adventures might inspire others to take an interest in conservation.

Based on the book and BBC radio series of the same name by Douglas Adams who went in search of endangered animals with Mark in the 1990s it's filmed in some of the most remote places on earth.

I went to meet Mark Carwardine a little closer to home, at the Natural History Museum in London, to find out more...

What do you hope the series will achieve?

I hope it will make a lot of people who wouldn't normally watch a wildlife series, let alone a conservation series, take notice.

I think that by having Stephen on board who has such a big following, and making it a light hearted travelogue with a serious theme - I hope it will get a wide audience.

How can we get people to care more? It's difficult when we're just sitting in front of the TV and watching these animals thousands of miles away...

If you find a subject that you really feel passionately about - an animal, an issue, a part of the world or a reserve - just get involved. That means being part of campaigns and helping to raise money. I think that will make a big impact.

The big challenge is getting governments to take any notice. We've got a long way to go before governments realise that actually this is a subject that should be taken as seriously as health and education and all the rest of it.

Obviously it's a similar trip to the one you did in the 1980s. Has the situation got worse or has there been an improvement?

It's hard to be positive about what's actually happened in 20 years. Douglas Adams and I picked eight different species fairly arbitrarily from a spread of thousands of animals, birds and reptiles. Out of the eight, two are now extinct (the northern white rhino and the Yangtze river dolphin).

A lot of the regions we went to have changed dramatically. One that really comes to mind is Madagascar. Twenty years ago we travelled down to the east coast and it was absolutely thick rainforest from the coast to the mountains and beyond. This time we traveled down and there were just isolated pockets left. Most had gone. We saw that time and again. It's quite shocking.

The one thing that was positive in almost every case is that the people that Douglas and I met were still there 20 years later. That really does inspire me - the fact that people have literally dedicated their lives to individual species or regions and they haven't given up hope.

The manatee: not so much like a seal, as like a travelling case for carrying a seal

A lot of people experience grief when a pet dies but the idea of a whole species going extinct is sometimes quite abstract. It seems that in this series you have tried to focus on a particular personality within a species?

Yes, there's lots of elements of that - you're right. A good example is if you have a single tiger that is in a horrible zoo in Tenerife and needs to be rescued and brought back to a retirement home for tigers in Surrey, then it's very easy to raise big sums of money to rescue that one tiger because people can relate to it. They can see that the tiger is in trouble and there's an end to the story.

If you say to people that tigers generally are in trouble and you want to raise money for tiger conservation, there's no individual tiger you're protecting. It's much more abstact. There's no end to it. You can never actually say 'right, tigers are safe.' Thanks very much, now we're going to protect something else. So it's far more difficult to inspire people to raise funds and interests.

It's the same with conservation generally - if you pick one animal that people can relate to and use it as a flagship you can protect or raise money for a whole habitat.

One of the reasons we picked the animals we picked is because they're a little bit wacky and weird.

In the manatee episode you say that being involved in conservation can be dangerous at times. Did you have moments of danger?

The danger is nearly always related to people and poaching. I've been on many patrols when people have got shot. It really is hell. There are lots of deaths with the poachers and the rangers. So there is this kind of war going on in some parts of the world where there is serious poaching.

In terms of our travels, I think we got away quite lightly. Six months of quite intense travel and we didn't really have any big problems at all.

Do you think the animals would be better off without us?

Yes, I think - who was it, a politician years ago - said that what needs to happen is that the earth needs to be hit by a big asteroid and just start all over again. I think there is some truth in that.

People are like a big push you, pull you. One half want to destroy everything. It's not quite that simple of course but you hope that the half trying to protect everything gets stronger.

But you do sometimes wonder if you remove people from certain areas and leave the wildlife be it would be a better world. Of course the reality now is that in so many places the wildlife is in so much trouble you'd need human intervention to save it anyway. Without people they'd drop off the edge.

Lastly, any top tips that people can do?

I'm a great fan of the smaller conservation groups that specialise in a particular area or subject. I think it's important to decide what really drives you. It could be any animal, country or part of the world or it might be a local group.

With little conservation groups it's much more satisfying - you can actually see the impact of what you're doing. That's a great way to drive yourself. You get to know the subject really well and you inspire other people.

The species starring in 'Last Chance to See' are:

Watch 'Last Chance To See' on BBC 2 from 6th September