Frozen molecules of water and methane, known as methane hydrates, could be released as Arctic ice melts

It's the 'other' greenhouse gas, regularly left out of the public discourse on climate change -­ one usually dominated by discussions of carbon dioxide.

Few talk about our 'methane footprint'; still fewer about the need to achieve a 'low-methane economy'.

Methane makes up a small (1.77 parts per million/ppm) portion of the atmosphere compared to carbon dioxide (380 ppm), but is a significant component of the greenhouse effect.

Methane molecules absorb 20-30 times more infrared energy than carbon dioxide molecules in their respective lifetimes in the atmosphere, and their overall contribution to the greenhouse effect is estimated at 18 per cent compared to 63 per cent for CO2.

Add this potency to the fact that it has a short lifespan in the atmosphere of between 9-12 years (compared to 100 years for CO2), and you can start to see why cutting methane emissions now could make sense.

Dr Chris Jardine, author of a major report on methane emissions in 2005, argues that we are wasting precious time by not acting on methane:

'We have been dithering around with Copenhagen and not achieving very much and while that is happening CO2 emissions are going up. You could actually do a whole load on methane emissions and get them down really quickly,' he says.

Already small efforts are being made to reduce emissions from human sources.

But, as with carbon emissions, we appear to have got to a point where further reductions in human sources of methane require harder choices. Do we want to move to a vegetarian diet? Would we accept rice genetically engineered not to produce methane?

The bigger problem with methane is that a large proportion of emissions is not from anthropogenic sources. What's more, these natural emissions could potentially dwarf the impact of all other greenhouse gas emissions.

The main natural source at the moment is wetlands, accounting for 30 per cent of all methane emissions and caused by bacteria breaking down organic matter in the absence of oxygen.

This process could produce more methane if air temperatures rise.

Dr Vincent Gauci is leading a three-year project to link up on-going UK research under the banner of MethaneNet and has been researching how wetland emissions could be partially negated through the use of pollutants like sulphur.

In particular, he has looked at how natural and artificial wetlands (rice paddies) respond to sulphur pollution in acid rain.

However, he admits his findings might not provide a solution to the methane problem. 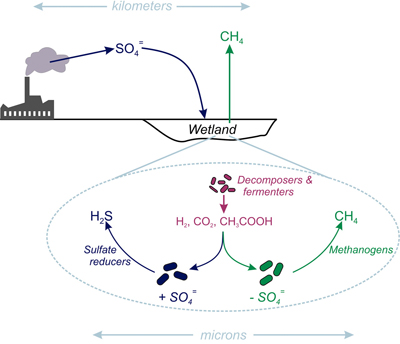 Another solution that has been suggested, draining the wetlands, is quickly dismissed by Dr Gauci and other methane experts.

'The minute you drain wetlands you emit CO2 so that is not an option even if it was acceptable in terms of the biodiversity loss,' says Dr Gauci.

Professor Paul Palmer, who has recently produced research on tracking methane emissions and is also part of the Methane Network, adds that as soon as wetlands become dried out they also become susceptible to fire that results in large amounts of CO2 and CH4 being released to the atmosphere.

Biomass in general is another source about whose contribution scientists remain unclear. Current modelling measurements in the atmosphere do not match up with those taken from the ground and biomass is thought to be the missing contributor.

One speculative theory is that trees could be funnelling methane out of the soil and into the air, although it remains as yet untested.

However the uncertainities about biomass and wetlands pale into relative insignificance when it comes to the vast methane reservoirs locked up in Arctic tundra - methane that scientists are convinced was a factor in previous de-glaciations.

The methane exists in a highly compressed form known as methane hydrates, molecules in which water and methane are bonded under high pressure or low temperature. In the case of the Arctic it is frozen, at least at present.

'At what point does that start to get released,' asks Dr Jardine, 'because that is one of the catastrophic feedback loops of releases bringing more warming and so on. I don't think anyone has got to the bottom of that.'

Prof Palmer has focused most of his research on wetlands but says the Arctic is where more research is needed.

'This is the particular region of the world where climate models generally agree that we will see high surface warming in the future. Once permafrost melts you will create thaw lakes and the right conditions to produce methane,' he says.

Ideas to try and influence the climate on a large scale, 'geoengineering' have included spraying aerosols into the Arctic stratosphere to reflect sunlight and cut the warming effect. Prof Palmer says such ideas are fraught with unforeseeable problems.

'By pumping aerosols into the atmosphere you're effectively perturbing a non-linear system. Without a clear idea of the climatic and humanitarian consequences of such a geoengineering approach this is just irresponsible science.'

Rather than contemplating geoengineering solutions, Dr Jardine says we should be looking at what we are doing today to reduce methane emissions and prevent the methane hydrates being released.

'There is a lot more we could do today on cutting agricultural emissions and on sharing the technology on cleaning up methane emissions from mining with rapidly industrialising countries like India and China,' says Dr Jardine.