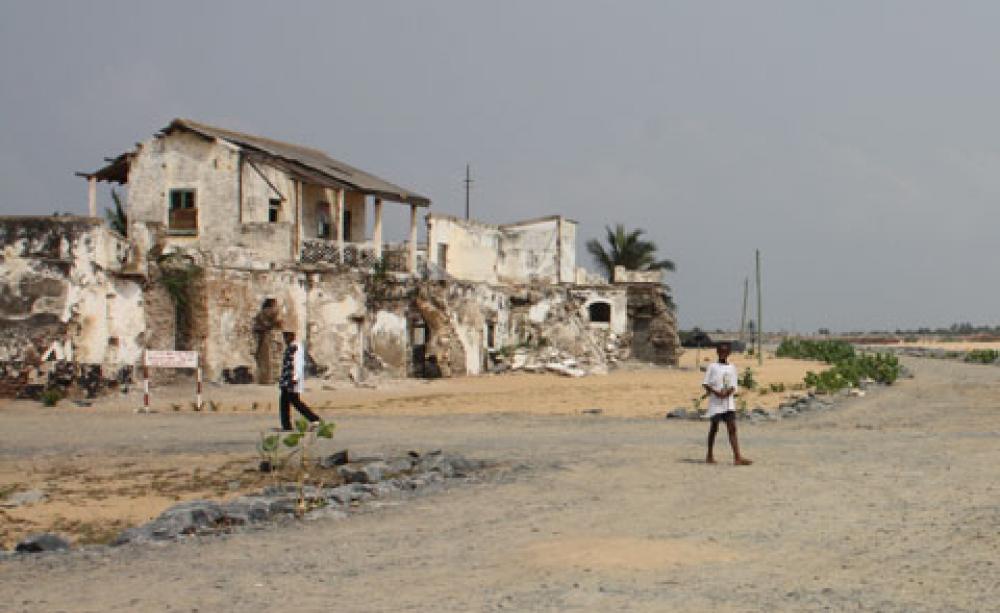 A slave fort in Keta half destroyed by the sea

In Keta, South Eastern Ghana, land was being eroded at up to 14m a year. Since 1900, hundreds of metres of land were lost including houses, churches and even the chief’s palace.

The town on a narrow sand bar between the Atlantic and Keta Lagoon, which floods during the rainy season, was threatened from two sides.

In 1999 Ghana’s government secured a loan from the US Exim bank and started an US$84million scheme - a combination of groynes, a revetment and raising the level of the land near the lagoon. A sluice gate was built so flood water from the lagoon could run into the sea.

But the four year project did not go as planned.

The government was supposed to build 800 houses for people displaced by land reclamation work but only 230 families received new homes.

A further 70 houses, in various states of completion, lie empty apparently because the contractors have not been paid. The remaining 500 homes have not materialised so people have moved away, are staying with family or living in temporary houses.

In the village of Vodza only a third of the land has been raised and thousands of residents continue to live in houses below the level of the lagoon, experiencing annual flooding so severe they visit neighbours by canoe.

Resident engineer, Rex Edeckor, is frustrated the work has not been completed. He said: 'The government would love to build these places but there’s no money in the coffers.'

He explained, despite flooding, the sluice gate has never been operated because of fears people will be swept out to sea and that fish will escape.

The sea defences are protecting the town from erosion but the government has not awarded a contract for their monitoring, so cannot benefit from the contractor’s 10-year guarantee. Within 15 years more sand will need to be pumped on to the beaches but Edeckor suspects the government has no money for this either.

Despite the millions spent, it seems this scheme can only be a temporary measure and if, or when, the sea level rises the work will have been largely in vain.

Edeckor predicted: 'If sea level changes by one metre perhaps a third of Keta district will be flooded.'