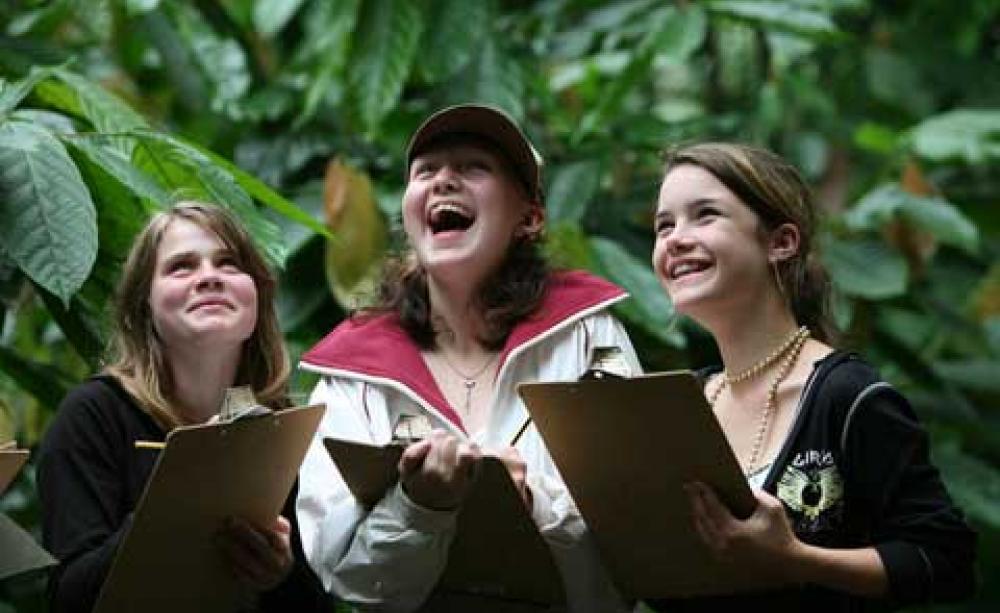 It's Friday afternoon and inside a stuffy classroom a video on climate change is in full swing. Shots of the Amazon are accompanied by an increasingly familiar litany of warnings: the earth's resources are running out, climate change is the greatest challenge of your time, are you going to help destroy the planet through your inaction?

As the students leave the classroom, talk turns to their work experience placements the following week. Most I speak to will be stacking shelves in supermarkets. Others will be lending a hand in local primary schools. None will be doing anything that points towards the supposed challenge of our time: climate change.

For all the talk of rising sea levels and runaway climate change, no one seems to be telling young people how they can do something about it or what jobs might make them the heros or villains of 'the age of stupid'.

This is partly because of the quality of careers education in schools more generally. A recent report by the School's Inspectorate OFSTED stressed that young people are 'at risk of making poorly informed choices about their future'.

But it also reflects that whilst the environmental sector is considered one of the most important emerging areas of the UK economy - in March this year, then Prime Minister Gordon Brown announced the creation of 400,000 green jobs - little has been said about the need to tell young people what those green jobs are or how they can access them.

Unsurprisingly, young people are complaining of not being kept in the loop about what kind of skills they need to get the jobs they're told could make or break humanity's future, and which will make up a significant proportion of the UK's job market within a few years.

This is where Real Cool Futures, the latest venture from the Eden Project, comes in.

Launched nine months ago, the website features video portraits of people who are seeking to address the challenges posed by climate change and other environmental issues.

From solar panel installers to fisheries officers, environmental lawyers to eco-entrepreneurs, the hundred or so profiles on offer aim to inspire and educate young people on the green career opportunities available to them.

‘The website shows that "growing up" and getting a job doesn't mean leaving your ideals and aspirations behind,' says the Eden Project's Chief Executive Tim Smit. ‘On the contrary, we seek to demonstrate that those fired by the desire to make a contribution are our most valuable citizens, and that lies right at the heart of this project.'

Users tell the site what they're into, what their personal qualities are and what level of qualification they hope to achieve. The result is a short list of videos tailored to their search criteria.

Those featured tend to be young and to talk passionately about what they do. In one video, Lawrence Toms describes how he has built a business turning sheep poo into paper. In another, Simon Proctor explains how he came to work for a renewable energy provider.

For those behind the site, the resource makes sense from their own experience of careers advice.

‘I suffered from rubbish or non-existent career advice and drifted into a degree because it was the stuff that I was good at in school,' says Sam Kendell, who manages Real Cool Futures.

‘Many of the young people we speak to have a good idea of the jobs of teachers, doctors, firemen and footballers...but do not have an understanding of the subtlety of the job market and the array of jobs on offer, particularly those relating to sustainability,' she adds.

There's also a section on Real Cool Futures for teachers, with activities for science and geography classes as well as downloadable careers information to be used in lessons.

‘As well as informing young people about issues around climate change and the environment, we are highlighting the really interesting opportunities that are emerging,' says Kendall.

So can a nicely designed website and some inspiring stories really create a generation of planet saving eco-warriors?

Perhaps not, but there's a more hands-on aspect to the Eden Project's foray into careers guidance that could see bored student shelf-stackers heading to the countryside.

By joining up with the Department for Children, Schools and Family's (DCSF) 'Green Talent' initiative, the Eden Project hopes to create 5,000 work experience placements for school age students across a range of sites including Kew Gardens, a variety of RSPB nature reserves and the Eden Project in Cornwall.

The placements are designed to introduce participants to opportunities opening up in the low carbon economy as well as engaging them in environmental problem solving.

Two days at one of the environmental centres will be followed by three days in different companies around the country, looking at how they are responding to climate change.

In a pilot project last year, 20 students from London schools spent time at the Eden Project learning about climate change and other environmental issues before being deployed to the sustainability departments of companies including EDF Energy, Boots and Rolls Royce.

‘As well as developing my knowledge of environmental issues, I was able to get an understanding of what different companies are doing as well as what skills and qualifications are necessary to get jobs in the environmental sector,' said Mustafa Mohamed, a 16 year old student from East London.

‘We don't hear much about "green jobs" in our careers guidance at school but now I'm really thinking about what I can do to help tackle climate change.'

Andrew Hickman is a freelance journalist