How to campaign: climate change and energy 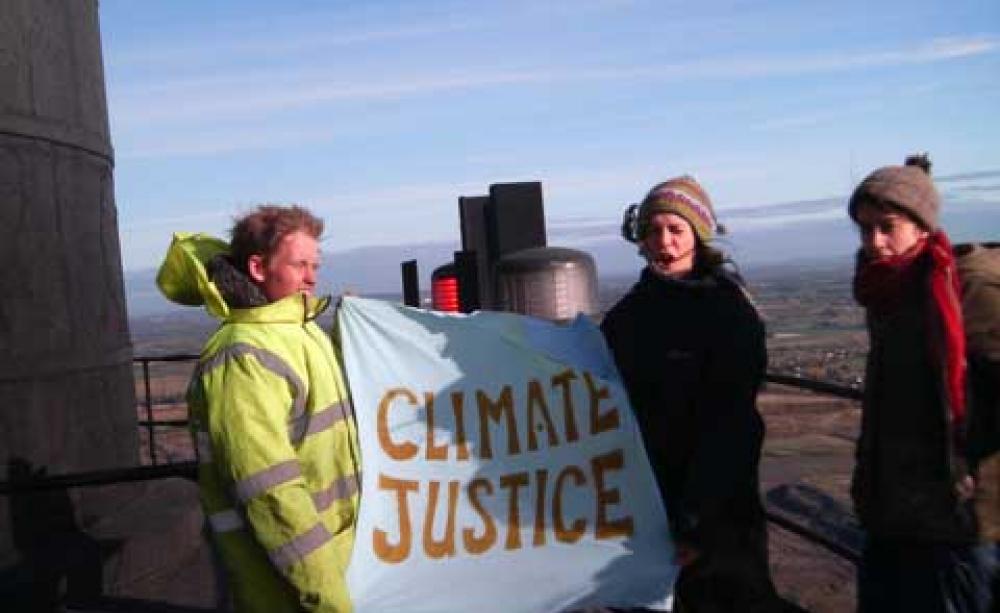 Activists broke in and occupied a chimney at the Didcot power station in Oxfordshire
From direct action campaigns to eco-village renewable energy systems, there are many ways to learn about and get involved in actions to prevent climate change

Climate Rush is inspired by the actions of the Suffragettes 100 years ago, who showed that peaceful civil disobedience could inspire positive change. Initiated by activist Tamsin Omond, Climate Rush staged the infamous Edwardian picnic at Heathrow Terminal 1 and more recently the 'No New Coal Awards', among other acts of ‘peaceful civil disobedience’. An Ecologist interview with Tamsin can be read here.

Climate Camp aims to kick start a mass social movement to tackle climate change. It has recently started organising regional and national meetings and groups, aiming to share knowledge, resources and ideas on how to build and grow the movement.

Campaign Against Climate Change pushes for radical action to prevent the catastrophic destabilisation of global climate. Since 2005 the Campaign has organised a yearly National Climate March at the time of the annual United Nations Climate Talks. This event brings thousands on to the streets of London to demand urgent action on climate every year

Akashi is a grassroots campaign aiming to give a bigger voice to black and minority ethnic groups on climate change issues. Read an Ecologist article on Akashi here.

350.org, founded by veteran US environmentalist Bill McKibben, is a worldwide campaign that asks members to remember one number: 350 parts per million of CO2, the atmospheric concentration to which we need to return in order to maintain a stable climate (currently we're at 384ppm). The website has news, scientific resources and info on how to spread the 350 message.

CRAGs - Carbon Rationing Action Groups started in 2005 with local groups which aim to support and encourage each other in reducing carbon footprints towards a sustainable and equitable level. The group decides on a carbon allowance and every member takes steps to stay within this limit. They also aim to share knowledge and skills in lower carbon living, raise awareness, and promote practical action in the wider community. They have now started Carbon Clubs, a facilitated education programme, which aims to distill the effective carbon reduction learning methods developed by CRAGgers and similar groups and take it to a broader audience. Carbon Club carbon literacy sessions are currently taking place across North London.

Carbon Conversations is a course of six lessons, each with a different focus, with the aim of making climate change more personally relevant and understandable to a broader range of people. The six sessions of the course each cover a different topic: Looking for a low carbon future, home energy, transport and travel, food and water, consumption and waste and moving on. The aim is to discuss and explore attitudes, problems, advantages and drawbacks to carbon reduction in an open and non-judgmental way, and put into practice ways of reducing your own carbon footprint.

10:10 campaigns to get people, businesses and organisations to cut their carbon emissions by 10 per cent in 2010. The 10:10 Community Roadshow aims to convert volunteers to become community leaders through workshops on communication and leadership techniques.

Transition Initiatives are community-led responses to climate change and fossil fuel depletion. There are thousands of initiatives around the world in towns, villages, universities, islands etc., which can all be found here. The aim is to self-organise into groups covering key areas in the community such as food, transport, energy, housing, education, textiles etc, and creates practical projects to reduce carbon emissions and oil dependency, such as community supported agriculture, car clubs, local currencies, neighbourhood carbon reduction clubs, urban orchards, and re-skilling classes. When an initiative is sufficiently competent with these concepts and practices, it embarks on an EDAP (Energy Descent Action Plan) process. This is a community-visioned and community-designed 15-20 year plan that creates a coordinated range of projects in all these key areas, with the aim of bringing the community to a sufficiently resilient and low CO2-emitting state.

Findhorn Ecovillage employs cutting-edge thinking on sustainable human settlements. A low carbon pioneering eco village since 1985, it has four wind turbines and an ecological footprint half the UK national average.

Torrs Hydro is a community-owned hydropower project in South Mills, Derbyshire. Set up in 2007, it was established with funding from local people, local business and grants. There are 230 shareholders in total, who attend annual AGMs. They have now started a community education proramme on renewable energy. The building has been constructed using local stone and is designed to blend into its post-industrial location. The local Cooperative Food Superstore buys all the electricity and any power surplus to its needs is sold through the national grid. Read about how it was set up here.

The Green Valleys Organisation was established in May 2009 to enable and support local groups to source and install community-owned micro generation projects for community benefit. It is a not-for-profit Community Interest Company based in the Brecon Beacons National Park. An Ecologist article on it can be read here.

Household Energy Service (HES) is a free environmental survey service for local households in Shropshire, run by specially trained community volunteers and a core of paid staff. Over 1,000 households in Bishop's Castle and neighbouring towns/villages are now working towards low carbon living with the help of the free energy saving consultations and reports provided by HES. An Ecologist article on people-powered innovation can be read here.

Low Carbon West Oxford (LCWO) was set up after the summer floods of 2007 by residents concerned about climate change and local flooding. It is a community-led initiative which aims to combat climate change by cutting community carbon dioxide emissions by 80 per cent by 2050, encouraging residents to live more sustainably and contributing to a more cohesive and resilient community.

The HEET Project, set up in 1999 in Waltham Forest, aims to tackle youth unemployment, fuel poverty and global warming by training young, unemployed people to improve the energy efficiency of the homes of people on low incomes.

Stop Hinkley is dedicated to the decommissioning of all the nuclear reactors on the Bristol Channel and the Severn Estuary and is committed to the introduction of greener technologies. The group was set up in the mid-eighties, when local residents successfully campaigned against a proposed pressurised water reactor known as Hinkley C. Their campaigning later led to the closing of the ageing Hinkley A. Hinkley C and D are now back on the agenda, and are the new focus of the Stop Hinkley campaigners.

The Shutdown Sizewell group in Suffolk focussed on shutting down Sizewell A and B and nuclear power stations in the UK, as well as promoting benign sources of renewable energy.