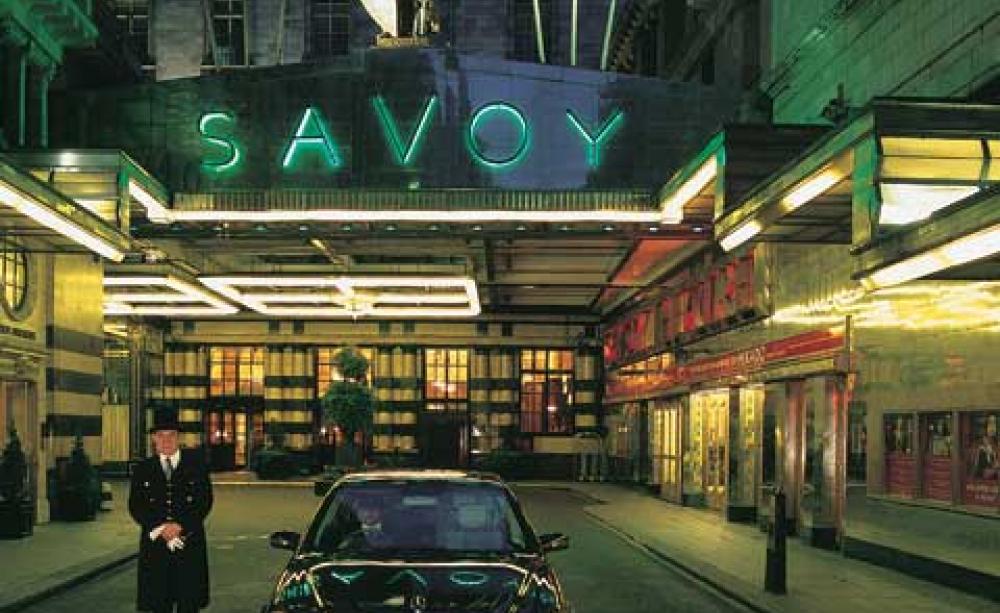 The newly reopened Savoy has significantly cut its waste and energy consumption
One of London's most prestigious hotels has had a green makeover as part of a £220 million refit. Ahead of the official reopening, Matilda Lee gets an exclusive preview of the capital's most environmentally responsible luxury hotel

When the Savoy, London's first and most illustrious luxury hotel, reopens this month the plush, grand entrance will dazzle and awe as never before, but the untold - and unseen - story of its renovation begins in the basement below, far removed from the marble floors and gilt-trimmed walls.

Deep down in the bowels of this famous hotel there's been the mother of all eco retrofits - making what, at over £220 million, is already one of the most ambitious restorations in British history also the biggest green makeover to date.

Throughout the hotel's three-year closure, a pioneering Green Team has been busy installing energy-efficient technologies and other improvements that will result in a 40 per cent reduction in overall energy consumption and an annual carbon reduction of around 3,000 tonnes. What's more, 90 per cent of waste will be diverted from landfill, food waste turned into electricity, and a green procurement policy implemented. For a touch of eco glamour, if such a thing exists, there'll be a dedicated ‘green' butler added to the 25-strong butler team and a green stay package offered for like-minded guests.

And it all began when the Personal Assistant to the General Manager was looking for a challenge.

Debra Patterson, a former PA at the hotel, says that in 2005, when the Savoy was taken over by the Fairmont Hotels Group, the hotel was, ‘doing very little' for the environment. She decided to look into the voluntary measures listed in Fairmont's Green Partnership Program, which had steered other Fairmont properties through green renovations. ‘At that time it was something that interested me, so I got the guidebook. I didn't realise where it would lead today.'

She and a small group of staff representing all areas of the hotel formed a Green Team and began a 5-year journey aiming to make the Savoy London's most environmentally responsible luxury hotel.

‘We started small: recycling paper and glass, creating a switch off campaign, and donating some of the things we couldn't use anymore, like half used shampoo bottles, to charity rather than leaving it to go to landfill. We didn't have a budget and it was all new,' Debra says. When the Savoy closed for renovation in 2007, they had the opportunity to take greening initiatives to a new level.

Through the basement's winding, dark corridors and down perilously steep stairs I follow Jack Harding, Chief Engineer, to view the hotel's new green jewels: a combined heat and power (CHP) plant that, by generating energy as a by-product of heating the building and water, will end up reducing the hotel's reliance on the national grid by approximately 50 per cent.

The new CHP unit cost £2.7 million, but the calculated payback is within 4.5 years, according to General Manager Kiaran MacDonald, who is quite chuffed about the enthusiasm his former PA has brought to making the hotel more environmentally responsible.

Past another series of rooms humming and buzzing with big machinery and through more winding corridors on grated floors not meant for ladies shoes, we reach a kind of huge data command centre: a wall completely covered in energy meters clocking every single outgoing source of water and electricity in the hotel. There are over 100 meters in all, I am told, and while the meters set them back £1 million, energy consultants Evolve will track energy use and deliver a monthly report allowing the Savoy to keep tabs on, and consistently lower, electricity consumption.

Kitchens are traditionally one of the most energy guzzling areas of a hotel and the Savoy was no different - so tinkering with what they had just wouldn't do. Jack and his team installed a new central refrigeration plant with a heat exchanger, which will reclaim the exhaust heat from all kitchen appliances and reuse it as energy to preheat domestic hot water. How much recycled energy actually is produced will only be known once the kitchen becomes fully operational.

Kitchen scraps and leftover food will be collected daily by recycling group PDM, sent to a biomass-to-energy renewable power plant and the resulting biofuel will be fed into the national grid. This new system of diverting kitchen waste from landfill ‘is a Godsend', says Debra, and will save an estimated £22,000 a year, reduce CO2 by 11 tonnes and create enough electricity to power 20 per cent of the guestroom lights.

A new herb garden created in an underused spot in the adjoining Victoria Embankment will provide 18 different seasonal herbs for the dishes and cocktails, and, through Debra's initiative, this space will be open to the public and school horticultural programmes as part of Capital Growth, the mayor's campaign to grow more food in the capital. 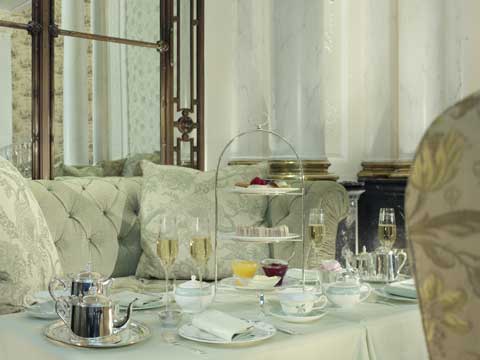 Yet how much of the hotel's River Restaurant menu will be local, seasonal or organic is unclear - Debra couldn't give a figure but says the Executive Chef is dedicated to supporting these issues. ‘We support local growers, for example, our honey is sourced from the London Honey Company, cheeses from Kent, Berkshire, Hampshire, Wiltshire and so on. We are looking to become a member of the Sustainable Restaurant Association'.

Maintaining the hotel's luxury standards has meant that in some areas they haven't been able to go the full Monty. ‘No energy efficient bulb has been made that makes crystal sparkle like a tungsten filament,' says Jack of the hotel's dazzling collection of chandeliers (anyone have news on this?). They have retrofitted fire escape lights and some feature lights with LEDs and CFLs are used in corridors and in bedrooms (they found lamps that look like incandescent lights).

An infrared detector system reverts room temperature back to the standard 21 degrees only when a room is occupied - otherwise it can waver between 18 (in winter) and 23 (in summer) before the heating or air conditioning kick in. And the evening ‘turn down service' when room attendants turn on all the lights and TV and turn down the bed has been retrofitted with a device that actually turns off everything until the guest is physically in the room.

Jack says they are looking into how to solve the problem of not being able to turn off TV standby - doing this now causes TVs to be cut off from the central entertainment system.

A culture of green

Debra is particularly proud of the new green stay package. ‘When I first suggested having a ‘green room' the response was, "we can't have that now".' Four years on, I'm very happy to announce the Elements Stay Package'. Guests will get a day Travelcard for public transport and have the option of joining a green tour of London - through either Context Travel or Insider London.

The ‘Green Butler', Nicolas Olivier will be on hand to direct guests to the best organic restaurants, shops and more the city has to offer but guests can also get off the beat path, don Wellies and spend a day cleaning up littered waterways with charity Thames21, the Savoy's signature community partner.

When asked how staff has reacted to the changes Debra says all 600 of the new staff have environmental responsibility written in their job description.

Just like most stories of major green overhauls - it is down to one or two forward thinking individuals. The story of greening a 268-guestroom luxury hotel with a history dating back to 1889 has been no different. ‘I can see it as a growing demand, so why not a growing demand for the Savoy?'

Could Debra have planted the seeds of something more? Perhaps a new era of responsible luxury?

The Savoy, The Strand, London