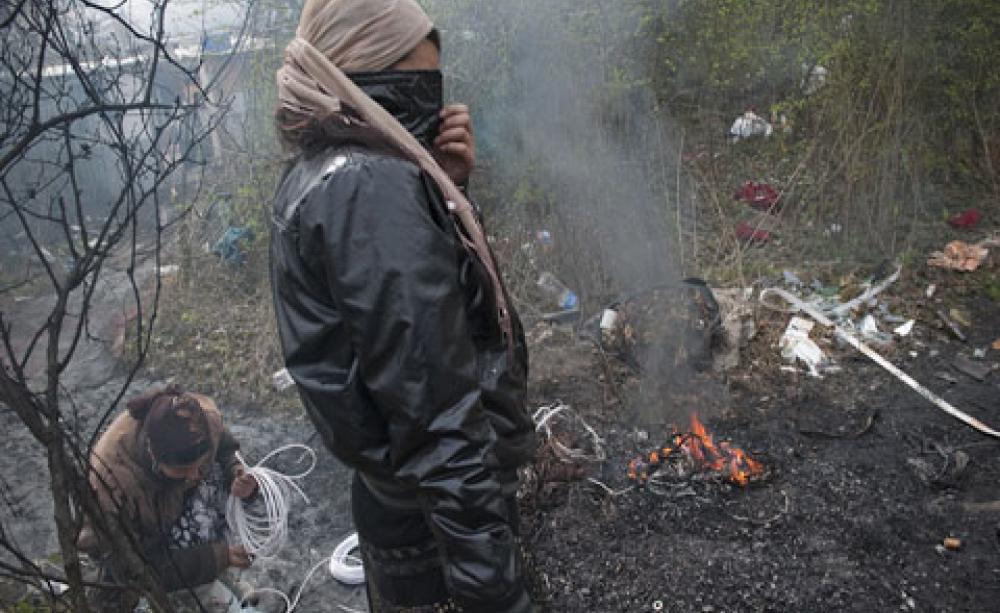 In the wake of President Sarkozy's crackdown on the Roma people, an Ecologist investigation uncovers how poverty and discrimination are forcing persecuted communities to scratch a living recycling France's growing mountain of e-waste - potentially threatening health and raising questions over the effectiveness of waste policies

‘It’s a city within a city,’ says a man who goes by the name of JP. ‘They’ll find a pair of old shoes on the street and resell them here for five euros. The kids will offer to fetch you water, but it'll cost you fifty cents. Everyone’s in business!’

In a vast secluded parking lot on the outskirts of Paris, about 150 Roma people from countries such as Romania and Bulgaria have set up camp, erecting shacks of discarded planks and plastic sheets. It’s mid-day and the women are outdoors cooking meats and stews on open stoves carved out of metal drums, or from charred shopping carts. The radio of a parked van plays the soulful rhythm of gypsy music.

A few of the older kids have made a game of riding municipal waste bins down a paved road leading into the encampment. The bins are empty. Instead the trash – empty water bottles, rotten mattresses, perished white goods, rubber tires and vast nests of tangled cables – are stockpiled in heaps throughout the site, amassing in ditches and swallowing up the surrounding vegetation. This abundance of waste is in fact the very engine of what JP calls a city; the source of a grubby, invisible, yet bustling micro-economy.

Roma men and women go gleaning the streets of greater Paris in search of discarded electrical and electronic goods (e-waste), shed by city’s respectable citizens and businesses. Hauling dirty trolleys, on rickety bicycles, or – for the big timers – in dilapidated cargo vans, they round up old refrigerators, broken microwaves, obsolete television sets and other unwanted items, and bring them here. In a crude feat of reverse engineering, the e-waste is broken back down to its elements: aluminum, copper, iron, lead. It’s the metals they’re after.

With a vast network of scrap dealers in France, there is always a ready market for metals, which are becoming easier to recycle than to mine. The prices may fluctuate with global market forces that are far removed from the realities of slum living. But for the Roma communities who live in chronic poverty – often forced to survive on the refuse of societies that reject them – the business is lucrative. These days, a kilo of stainless steel goes for about 0.97 euro, while copper, a prized metal, varies between 1.20 euro and 4.30 euros, depending on the quality.

For a young man like Novak who lives in a caravan with his wife and two-year old son in one of the more established encampments near Paris, scavenging for scrap metals (la ferraille) has become a way of life.

Twice a day, he sets out with a friend in a white cargo van, brought in from England. With the instinct of a hunter-gatherer and the rigor of an entrepreneur, he scours the streets of Parisian suburbs – Les Lilas, Saint Ouen, Vincennes, Pantin – on a schedule that’s tightly aligned with the programmed routine of specialized municipal waste removal services, clocking some 70km a day.

‘Saturdays and Sundays – they’re good for ferraille. People stay home, clean the house,’ he explains. On a good day, Novak and his friend can earn 50 to 60 euros, sometimes more. “When I find ferraille, I put 10 euros to 15 euros [of petrol in the van]. When I don’t find, I put in five euros,’ he says of his operating expenses.

The Sunday I tag along to hunt for e-waste is one of those good days. Just as we’re leaving the encampment, Novak’s brother arrives in a dark blue sedan packed with four other people. He’s just driven in from Romania. And on the very last leg of his trip, dumped next to the road leading into the encampment, he’s found a load of abandoned household appliances.

‘They know we do ferraille,’ Novak says by way of explanation as we approach the cargo. Three refrigerators, two dishwashers, a Miel washing machine and a Whirlpool dryer have presumably been dumped here by well-meaning, if lazy, deliverymen from a major retail chain. ‘There is luck today. I am happy my brother is back. I am happy to have found la ferraille,’ says Novak.

The booty represents more than just a stroke of luck. It is an encounter with a relatively recent source of competition for people like Novak, who for years, made it their business to peck away at over 1.5 million tonnes of e-waste generated by French households and companies every year – a figure that is growing.

With the implementation of an EU directive in France three years ago  (the Waste Electrical and Electronic Equipment Directive or WEEE) however, manufacturers are now held responsible for collecting, recycling and safely disposing of their branded e-waste. So when your new refrigerator is delivered, the deliveryman is also charged with picking up your old machine.

Since 2006, some 22,000 e-waste drop-off points have also been put in place across the country, by retailers and municipalities. And for urbanites without cars, cities such as Paris offer a free collection service for large household appliances, furniture and other bulky items, either by appointment or on designated days.

Despite these initiatives, recovery rates through official WEEE channels remain low. In 2009, the average French consumer generated some 22kg of e-waste a year, the equivalent in weight of a seven-year-old boy, according to the French Agency for the Environment and Energy Management (ADEME). Yet a mere 5.7kg (a 3 month old infant) was actually recovered (per person) through official channels. Meanwhile, businesses are left to their own devices to dispose of their e-waste; and they are possibly the main source of illegal exports to developing countries, according to Hélène Bourges of the CNIID, an independent environmental protection organization.

It’s unclear exactly where it all winds up – forgotten in cluttered basements and closets, incinerated alongside organic waste, illegally exported to countries such as China, India or Ghana, or recycled by the likes of Novak through the scrap metal dealers. According to René-Louis Perrier, President of Ecologic – one of four accredited e-waste recycling organisations in France – about half of France’s e-waste is lost to ‘parallel networks’.

This means that significant quantities of the country’s e-waste is winding up in the hands of the poor, being recycled in conditions that are hazardous to the health of these informal eco-workers and the environment. Whether it is in the slums of Paris, or at industrial-scale workshops in Guiyu, China, cables are often burned in open fires to extract precious copper. And it’s not uncommon for the Roma to take an old car battery and melt it down for the lead.

‘They would work directly above these clouds of black smoke,’ states Dr. Bernard Moriau, talking about the Roma he examined living in the woods of the Val d’Oise region near Paris, while on mission with the humanitarian organisation, Doctors of the World. ‘I’m always very worried for them. But warning them of the danger is not going to change their ways. Today, it’s their only means of survival.’

According to a local news source, in 2008 the grounds of an evicted Roma encampment near Lyon was found to be contaminated with heavy metals, known to cause cancers. Meanwhile, an investigation carried out by Doctors of the World and other local NGOs at three different sites in the south of the country (Bordeaux, Annecy and Toulouse) ten years ago revealed abnormal levels of blood lead in half of the children, while one in four suffered from lead poisoning. But these findings have yet to interest public health authorities, says Dr. Jean-Claude Guiraud, who estimates that thousands of Roma children are at risk of lead poisoning.

Similar findings were described elsewhere, including at a site near Lyon where 19 children were recently reported to have elevated blood lead levels, and two were poisoned with lead. ‘Children are especially vulnerable to lead poisoning,’ says Dr. Guiraud, who has been working with the Roma since 1965. ‘It can cause permanent damage to all the organs including the brain.’

The encampments themselves pose an immediate danger to children, who find themselves playing next to toxic bonfires and rat-infested Aladdin’s caves of gutted machinery and sharp metal scraps.

As the head an accredited recycling organisation that pays special attention to providing job opportunities for the physically disabled and other marginalized people, Réné-Louis Perrier is particularly bothered by the practices of his informal competitors.

Refrigerators, which are prized by recyclers for a copper-rich component – the compressor – pose a special environmental threat during recycling. They contain cooling agents that can damage the ozone layer, and potent greenhouse gasses within the insulation foams. ‘When a scrap metal dealer takes a refrigerator and puts it through a car crusher to extract the metals, about four tonnes of carbon are released into the atmosphere,’ says Perrier.

It’s a source of competition he qualifies as unfair. ‘They are not concerned with their recovery rates, nor with de-polluting their products. These costs have been cut from their operations,’ Perrier says.

But scrap metal dealers provide proper invoices and a means of survival for an industrious tribe of Roma, who, thanks to discriminatory employment regulations in France, find it impossible to get legitimate work.

‘Sometimes they’ll go behind supermarkets and look through the bins. They’ll find food that’s well wrapped – yogurts, hams – that still have two days left before expiry,’ says Liliana Hrispathe, a Roma woman who came to France six years ago and now works with an NGO that places Roma children in schools. ‘In Romania, you don’t find anything in the garbage. You don’t find clothes for your children, food to eat, wood to heat during the winter, and scrap metals to make a bit of money. Romania, it’s empty.’

Carolyn Lebel is a freelance journalist based in Paris