Retrofit revisited: one year on 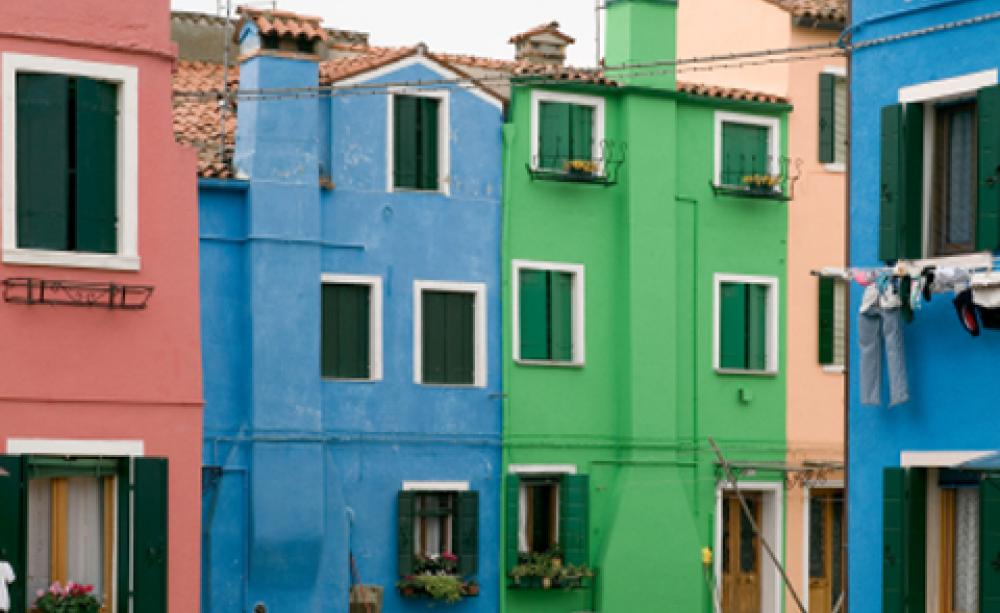 The salvaged velvet curtains are in and the newly painted walls are good to go but was it all worth it? In the final installment of her ecorefurb diary, Sue Wheat takes a retrospective look at a challenging year

Our ecorefurb does seem to have taken a while; over 12 months now, which is much longer than I thought. ‘But remember - it’s an iterative process,’ said a kind friend. I looked it up. ‘Iterative’ means ‘a mathematical procedure that generates a sequence of improving, approximate solutions for a class of problems.’ Improving and approximate. Absolutely. Our Victorian terraced house’s class of problems included condensation along with cold and energy inefficiency. The maths involved: looking at our energy usage, deciding on our budget and finding solutions that fitted within it.

The first installments in my ecorefurb diary covered some of the advice I took in order to work out what would help us keep the heat in and the damp out while not busting our £10,000 budget. Particularly useful was getting a Parity Home Energy Masterplan (www.parityprojects.com), which gave us in depth analysis of our options from ‘no brainers’ to ‘green halo’ refurb suggestions. We chose to insulate our three bedroom solid brick, cavity-free external walls when Parity revealed that trying to keep our house warm when the walls were so cold was taking 52 per cent of our energy use and costing us an extra £125 a year. As our walls were falling apart with condensation damage anyway, there was no point in repairing them without solving the problem, which, to our great relief, the insulation combined with installation of heat recovery ventilation units (www.dampexpert.com) did instantly. Luckily all the expense has paid off so far. In 2008 when we had a highly inefficient boiler and no insulation, our gas bills were £663 per year. After we fitted a new condensing boiler and new radiators they dropped to £511 and last year with the wall insulation, draught proofing and wood-burning stove installed, our bills totalled £308 - even when the harsh winter was taken into account. 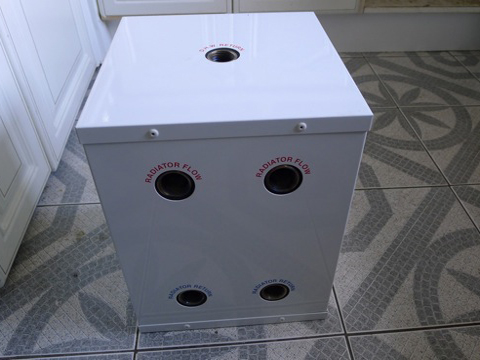 But despite the savings, not everything has gone so smoothly. Over the last couple of months I’ve been checking whether our water and space heating is working efficiently and I’ve discovered that boiler marketeers aren’t quite telling us the truth. A-rated condensing boilers only condense (which is what saves the energy and money) at 95 per cent efficiency when the water returning to the boiler is 55°C or below. Ours was set at 77°C so our condensing boiler was barely condensing at all, which is apparently normal. But we’ve now had an ingenious white box installed under our boiler. Called an Oxyvent (www.oxyvent.com), it combines a venting system which increases the flow rate through the heating system and acts as a thermal store, allowing radiators to work at a lower but more uniform temperature of 60°C. This also stops air being captured in the radiators, which increases the radiant heat. Thanks to the Oxyvent, next winter we’ll have the same warm rooms but will use around 30 per cent less gas to achieve it.

While I was investigating the flaws in the boiler, I also found out that new models often have a permanent ‘pre-heat’ system running, which is in effect, an inbuilt immersion heater so that hot water is constantly available. Many A-rated boilers aren’t efficient unless you know to switch off the pre-heat by pressing the eco button. Those with boilers lacking the pre-heat system will usually run the tap until it’s hot, wasting lots of gas and water in the process. The Combisave (www.combisave.com) reduces the flow of the hot tap for a few seconds while the condensing boiler heats the water up, then automatically reverts to full pressure when it’s hot. We did a before and after test and found that before the Combisave installation it took 41 seconds and 7.5 litres of water before the water reached 38°C. Afterwards, it took 29 seconds and 2.5 litres. The savings are spectacular: around £50 to 100-worth of gas, 55,000 litres of water and around 0.3 tonnes of C02 every year, plus a further £180 in reduced water use if you’re on a water meter.

What’s been both frustrating and inspiring on this journey is that new technologies like these seem to be coming on the market all the time, as a visit to Ecobuild (www.ecobuild.co.uk) showed. There are now many more insulation products to choose from which are easier to install and will take up a smaller amount of space. Super-efficient LED lights are also dropping in price, and as a result, we are changing our bulbs from CFL bulbs to LCD in rooms we use a lot. We decorated using natural paints from Green Shop (www.greenshop.co.uk), Green Building Store (www.greenbuildingstore.co.uk) and Nutshell (www.nutshell.co.uk). We added a touch of decadence to our refurb with some luxurious, insulating velvet curtains from Susan Clarke interiors (www.susanclarkinteriors.com), which are salvaged from stately homes.

Ironically, our biggest energy saving win is still looming over our heads – lagging the loft. Previous owners partitioned off the centre and laid a floor without insulating first, which has made much of the roof inaccessible. As the smallest member of my family apart from our seven-year-old, it was down to me to crawl among the very narrow joists (and an old wasps’ nest) and attempt to lag the roof. But lacking the agility of a seven -year-old, it was a challenge I soon gave up on. The loft lagging companies won’t touch it, so it looks like I’m going to have to go on a salad-only diet and tackle it again. We could insulate the rafters (www.reflectenergy.co.uk) but since it’s quite expensive and we’re toying with the idea of a loft conversion in future years, it’s not viable.

On a good day I think of us as ‘pioneer ecorefurbers’. On a bad day I realise that pioneering has its costs; in our case being just ahead of the new Green Deal starting next year, which will allow homeowners and businesses to borrow up to £10,000 to replicate the energy efficiency measures we’ve put in at our own expense. Loan repayments will be made from savings on energy bills. So I am slightly miffed, although I do hope to insulate our floors and kitchen under the scheme. Luckily, we are still in time to take advantage of the Feed in Tariff for Solar PV panels before April 2012. I’ve had quotes from a number of companies and my biggest concern is working out which one to choose. The finances are a no-brainer – the combination of the Feed in Tariff and our electricity savings make the return on investment around 13 per cent annually over 25 years. The downside is that we need to find the initial £9,000 investment, while pay back is around eight years time, so we have to be sure we don’t want to move for a while. So do we now qualify as an ‘Old Home Superhome’ (a nationwide network of British ecorefurbers who’ve reduced their carbon footprint by 65 per cent or more, www.superhomes.org.uk)? It turns out that by the time we’ve lagged the loft we’ll have reduced our carbon footprint by 52 per cent so we’re not yet an official ‘Superhome’. But I’m still pretty chuffed given we started off from quite a low energy usage compared to most households of four, so making a reduction of 65 per cent is harder for us than if we’d been a turbo-charged family.

We have also done our ecorefurb on a relatively small budget - ours cost around £7,500, including £3000 on labour, which if you’re a DIY expert you could reduce. Compare this to what most people spend on a new kitchen or bathroom, which have no long-term investment benefits, and it’s a good deal. And contrasted against the cost of some of the extensive near-passivehouse eco refurbs I’ve come across and it’s a positive bargain.

If we get solar PV electricity we will be well above the 65 per cent energy reduction mark and will be able to give inspirational tours of our house to ecorefurb wannabes as other Superhomers do. In truth though, there’s not that much to see. Only we know that our normal looking, smooth white walls have thick insulation behind them keeping us cosy, and that the small white ventilation units in our ceilings are keeping the damp away. So I’m thinking of putting pictures up of the black mould and broken plaster that used to line the walls as a form of educational art just to impress visitors. And I wonder if touting viewings of our new super efficient boiler could fund a building course for me? Since we’ll have spent the rest of our savings on PV panels, it looks as if I’ll have to build the kitchen myself from the scrap wood collection I’ve amassed for our wood burner. I’ve got a feeling this ecorefurb could run and run…

If you have any advice for Sue on how to create the perfect eco kitchen or would like to get in touch about anything she’s written about, you can contact her at suewheat@me.com

To find out more about ecorefurbs, a valuable book is Sustainable Home Refurbishment: The Earthscan Expert Guide to Retrofitting Homes for Efficiency by David Thorpe (Earthscan, £34.99)