Angela Merkel’s decision to dispense with nuclear power has left environmentalists around the world exploring alternatives. Henry Gass weighs up the options

People around the world are reflecting on renewable alternatives to nuclear power in the wake of German Chancellor Angela Merkel’s announcement that Germany would decommission all its nuclear power plants by 2022. The decision leaves Germany with 11 years to replace the 25 per cent of the country’s energy produced by nuclear power. In the UK, new government incentives are opening up a variety of renewable heating options. So what does this mean for homeowners? Home heating accounts for 13 per cent of the UK’s total greenhouse gas emissions, which means people willing to give their power supply a greenover could make a big difference. Here's what's available:

The quick wins
Wall cavity insulation and loft insulation are cheap and easy ways to lower carbon emissions at home. ‘Loft insulation is easy to do because a loft is easy to access,’ says Chris Dunham, director of sustainable solutions company, Carbon Descent, ‘and wall cavities can be filled without any problem.’ An added bonus with wall cavity and loft insulation is that they’re viable options both economically – loft insulation usually costs around £290 and cavity insulation around £380 – and geographically, as it works for both urban and rural homes. Installation is also fast, typically taking half a day. Solid wall insulation, however, is a different story. Beyond the price (ranging from £3,700 to £15,000), the installation process can involve extensive refurnishing and could shrink your floor space. 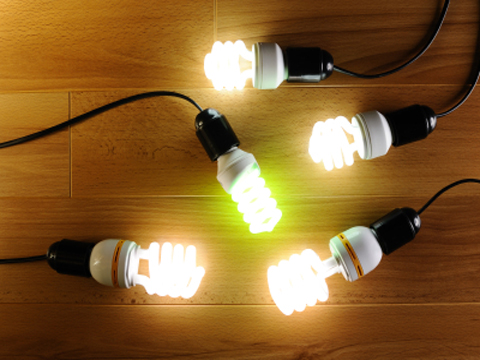 Energy efficient appliances are another cheap way to chip away at your home’s carbon footprint. Energy saving light bulbs cost between £2.25 to £5.49, although Dunham admitted ‘the quality of light is not quite there’ with energy efficient bulbs, especially LED lights (providers often describe these bulbs as emitting a ‘softer light’). Smart meters ‘will hopefully bring about changes in behaviour,’ says Dunham, and the Department of Energy and Climate Change (DECC) is hoping the same, aiming to have a smart meter in every home in Britain by 2020. These small displays, costing around £35, show you what’s turned on in the home as well as how much energy the home is using at that moment. ‘There’s a whole area of emissions you can avoid just by turning things off,’ says Dunham. ‘You can do a lot very easily when starting from scratch with an existing building stock.’

Solar and electric heat pump systems
‘Once you’ve used up those opportunities you get into the more expensive options,’ continues Dunham. Electric heat pumps, sourcing heat from either the ground or the air, are attractive options. Ground source heat pumps typically cost £10,000, while air source heat pumps are usually closer to £7,000. However, Dunham warned of potential hidden costs in the future as supply might struggle to meet the demand for electric heating in homes. ‘If we switch [gas heating] to electric systems like electric heat pump systems then often missed out of the calculation of the cost is the need to upgrade the electricity distribution system to cope with demand,’ says Dunham. The cost of increasing the capacity of electricity distribution systems could reach into the thousands of pounds in some areas, depending on demand, and would be paid for by adding on to electricity bills.

Popular solar options are the solar PV system, where solar panels turn sunlight into electricity, and the solar thermal system, where panels use sunlight to heat water. Environmentalist George Monbiot has been outspoken on the topic of solar power in Britain, arguing that, among other things, it’s not compatible with the UK climate. ‘Solar PV is a great technology – if you live in southern California. But the further from the equator you travel, the less sense it makes,’ wrote Monbiot in a column for Guardian last year. ‘In hot countries, where air conditioning guzzles electricity, peak demand coincides with peak solar radiation. In the UK, peak demand takes place between 5pm and 7pm on winter evenings. Do I need to spell out the implications?’ Counter-arguments make the case that PV panels are more efficient when kept cool. ‘So there’s a slight benefit in having a panel sitting in a fresh wind or something, but still bathed in sunlight,’ said Dunham, admitting, however, that solar power was more attractive further south. 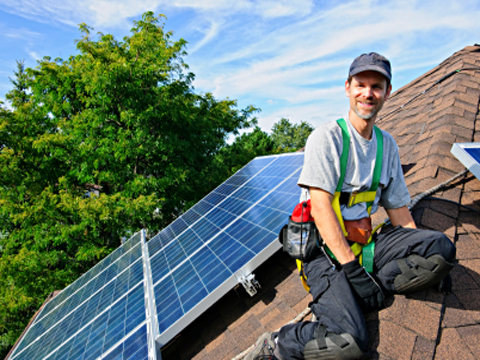 A slew of government incentive programs are making these high-end options increasingly affordable. The Feed-In Tariff (FIT) scheme, in place for over a year, pays homeowners 43p for every kilowatt of energy they produce per hour from renewable sources. ‘We’ve seen householders up and down the country getting involved with this scheme,’ said a DECC spokeswoman. The Renewable Heat Incentive (RHI), announced this March for businesses, industry, and local communities, subsidises the installation of renewable heat equipment, and will be made available to individual householders in 2012. In the meantime, homeowners have the Renewable Heat Premium Payment Scheme starting up later this summer. ‘The scheme is worth £15 million and it will support up to 25,000 installations over the next year, so under that scheme householders will get government money to help cover the costs of installation of renewable heat equipment,’ says the DECC source. DECC have identified ‘likely levels of support’ for RHI Premium Payments - £300 for a Solar Thermal unit, £850 for an Air Source Heat Pump unit, £950 for a Biomass boiler unit and £1,250 for a Ground Source Heat Pump unit – but the final amounts will not be confirmed until later this summer. ‘When we publish further scheme details we’ll explain what people need to do to get ready to apply,’ continues the DECC spokeswoman, adding that those who install kit under Premium Payments will also be eligible for ongoing support through the RHI, provided they meet the eligibility criteria of the full RHI scheme.

However, the incentive programs have received some criticism, since the money spent installing the renewable heat equipment will be collected through a general increase in heating bills. In the same Guardian column, Monbiot writes: ‘Buying a solar panel is now the best investment a householder can make. The tariffs will deliver a return of between five and eight per cent a year… The payback is guaranteed for 25 years. If you own a house and can afford the investment, you'd be crazy not to cash in. If you don't and can't, you must sit and watch your money being used to pay for someone else's fashion accessory.’ Dunham, however, argues that the solar subsidies were temporary measures to bring down prices. ‘If, as a result of the subsidy…the price of PV comes down, then at some point it will become economic to do it without subsidy, and it was worth paying this initial kind of stimulus to reach that point.’ However, Dunham acknowledges that the incentive programs represented ‘quite a regressive system.’ ‘To make it cost effective the government is forcing the utilities to pay an enormous subsidy,’ continues Dunham. ‘It’s an enormous cost, and basically we’re all paying that cost through our bills. So everyone who pays for electricity is subsidising the people putting the PV on their homes, and that will probably tend to be people who are middle class homeowners who are already, you know, reasonably well off.’ The FIT scheme is rendered exclusive in that homeowners must pay thousands of pounds for the equipment and installation themselves, recouping their investment 43p at a time through the tariff. What’s more, according to Dunham the savings on bills after installation financed by the RHI have to be greater than the capital cost of the measures you pay for. ‘The rule may limit what you can do. Only cost-effective measures will fit in what you can do,’ says Dunham, ‘but it does remove barriers to what you can do.’

Limited options: wind turbines and biomass
Despite the economic complications, those options remain the most practical large-scale household renewable heat equipment. Wind turbines, while attractive on an industrial scale, transition with difficulty to households. ‘After a lot of excitement over roof-mounted wind turbines, the results haven’t been good,’ says Dunham. Restrictions on where wind turbines can be sited – including the quality of the ground and the distance of moving parts from humans and livestock – as well as height and local wind speed requirements (typically 4.5m2) narrow the field for household wind turbines significantly. ‘There are places in the UK where it would work in a domestic setting, but they’re quite limited,’ says Dunham. ‘Something like three per cent of homes might be suitable for micro wind systems.’

Biomass is effectively any organic matter than can be burned for energy, such wood, waste and alcohol fuels. As with wind turbines, biomass boilers also face geographical restrictions. Concerns over the effects of boiler emissions on air quality, as well as the associated carbon emissions from production and transport, has restricted biomass boiler use to specific regions. ‘There are lots of issues around whether biomass is sustainable that go beyond the air quality issues,’ says Dunham, ‘Is biomass taking up land that was used to grow food so pushing up food prices and causing starvation? Are we cutting down forests to build biomass plantations?’ Dunham did insist, however, that biomass needs to have a role in Britain’s sustainable future, albeit a limited one. ‘It has to be kept,’ he says. ‘But it has to be limited in some manner; it can’t just be a sort of free-for-all.’

Urban vs. rural
No matter what sort of renewable you’re contemplating, it’s clear that urban and rural homeowners face different limitations. Rural homeowners have more independence, and can pursue projects such as a ground source heat pump. Rural homes are more likely have the space needed to fit the 200 metres of coiled loops two metres deep in the ground to siphon ground heat. ‘If you’re in an urban setting where you’re just surrounded by roads, it doesn’t work quite so well,’ says Dunham. Urban areas require a more communal approach. ‘It’s difficult from an individual household point of view to just initiate this on their own,’ says Dunham. ‘You can’t just go and build a heat network and persuade the neighbours to join onto it.’ Creating such a community heat network would also entail exigent costs in upgrading the electricity distribution system to cope with demand, a cost Dunham estimated at around £5,000. ‘The ideal situation is a communal one within an urban setting, but it’s obviously more difficult to initiate.’