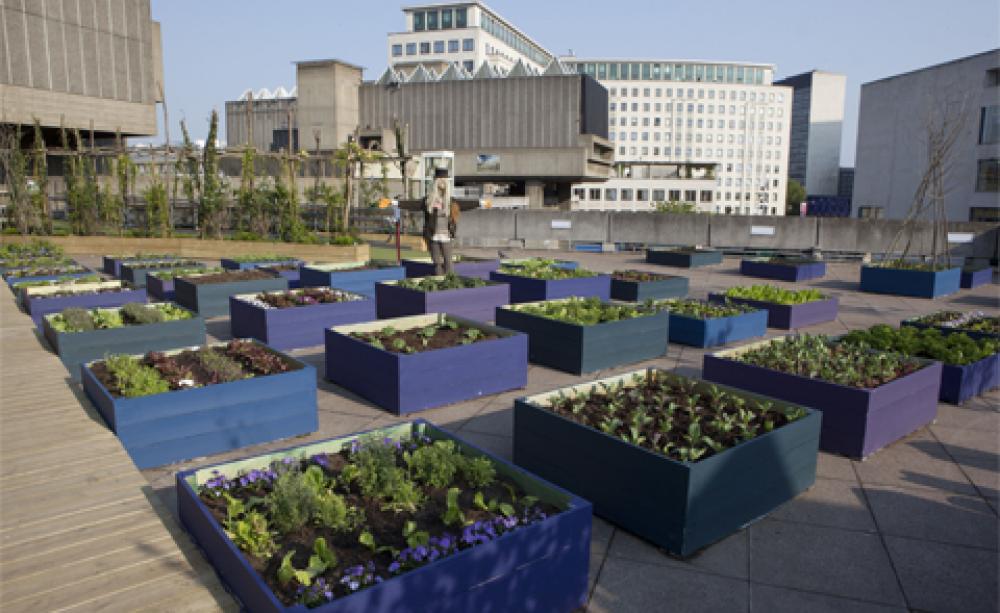 Paul Pulford bounds towards a concrete wall. 'They're going to be amazing and bright,' he shouts, waving his hands. 'All lined up, like a firing squad.'

Pulford laughs at his turn of phrase. He's talking about a row of sunflowers soon to burst open along a wall on top of the Queen Elizabeth Hall in London's Southbank. They were planted just two weeks ago by school-children in a newly created rooftop garden.

If you hadn't seen the cheerless, paved space before you'd think this green haven set among the Southbank's angular slopes had always been here. In fact, it's only just come to life. Constructed by Pulford and a team of around 50 volunteers, its theme is British gardens and landscapes and it has been constructed for the 60th Birthday celebrations of the Festival of Britain.

The 1,200m plot provides the missing piece of the Southbank site labelled in 1951 on the original architect's plans as the Sun Deck. The space, however, was never fully developed. 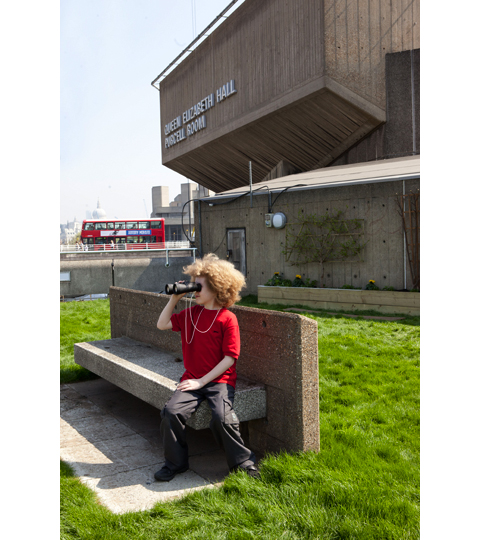 Now there are raised beds containing everything from courgettes to runner beans, cabbages to purple broccoli. There's a grass area already burnished by the bank holiday crowds; a café; a meadowland with 90 varieties of native British plants; a rustic pergola clothed with sweetly scented climbers and no shortage of new visitors.

'Look!' Pulford leaps across to the meadowland 'I wish I had my camera,' There's a bumble bee hovering over a buttercup. 'That's made my day,' he says delicately cupping the flower head between his thumb and his index finger. 'These are a rare sight,' he adds. 'It's just brilliant to see them back.'

Pulford's knowledge and enthusiasm is infectious. The garden, he says, is the best thing that's ever happened to him. It's not just an urban sanctuary for flowers, plants, insects and other creatures - it's also one for Pulford and the volunteers who helped create it and maintain it daily.

Most of the men and women here have been homeless, have battled drug addiction or have been in prison. They have been brought together through a collaboration between the East London-based Providence Row Housing Association and The Eden Project, based in Cornwall. The garden itself was designed by Eden's landscape architect Jane Knight and designer Paul Stone although the volunteers had an input into the final layout.

Pulford, himself a former homeless heroin addict who slept among dustbins in London, began gardening when he became a tenant in one of Providence Row's housing schemes. He began to tidy up the green spaces around his block and an idea blossomed. 'I loved gardening as a child. My adoptive dad was in a wheelchair so he would instruct me and I'd weed and plant,' he recalls, going on to describe how his childhood interest has become crucial to his recovery. 'When I began gardening again it took me back to being a child. It was a happy time, and I feel that whenever I'm working. When I'm up on this roof, my problems clear from my head.'

Fellow volunteer Trevor Budd also spent several years homeless and slept rough in locations near the Queen Elizabeth Hall. At one point he was even sleeping underneath it. A former miner, he came to London in 1993 from Nottingham after the pit closures and 'lost direction in his life'.

'I was sleeping rough on the Strand but it was too hectic there - people kicking and spitting on you. Then I was down at Cardboard City in Waterloo. I ended up sleeping under the building I am working on top of now. I have been through crack and heroin addiction and alcoholism.'

At his lowest ebb, Trevor was picked up by Providence Row and it was there he and Pulford met. Last year, he took part in the building the Places of Change Garden - also a collaboration with the Eden Project - which took pride of place at the RHS Chelsea Flower Show. The garden ended up winning a silver medal. 'I love gardening,' he says. 'I wish I had found it years ago. In the past, a lot of the time, I thought I wouldn't make it through.'

But, being outdoors and working with nature has become increasingly recognised as an effective therapy for mental health problems and addiction.

Studies carried out by the University of Essex, among others, show that engaging in physical work while viewing pleasant green rural or urban landscapes enhances mood, improves self-esteem and reduces blood pressure.

It's a sentiment echoed by the volunteers, who, like Pulford, say their heads clear, they focus and soak up the benefits of the great outdoors despite their otherwise chaotic lives. For periods of time it literally grounds them. 'Sometimes it's like being a social worker,' laughs Pulford, but being part of the team also means that the members support each other and understand what each other might be going through.

'We've all been there,' he adds, before apologising for the earth embedded in his fingernails. 'It's an occupational hazard,' he says, 'but there is nothing like the feeling of the soil through your fingers.'

The schoolchildren, who now frequently visit the site, seem to like that too. Alongside the sunflowers, they've helped plant the nasturtiums and violas in the raised beds and there's a greenhouse bursting with seedlings. 'There's loads more to do, and it'll be great when the buttercups and forget-me-knots and daisies start coming up in the meadow,' enthuses Pulford. 'I can't wait for that.'

The rooftop garden is open at the Southbank until September 4, 2011. Paul Pulford is part of Grounded Ecotherapy.

Helena Drakakis is a freelance journalist