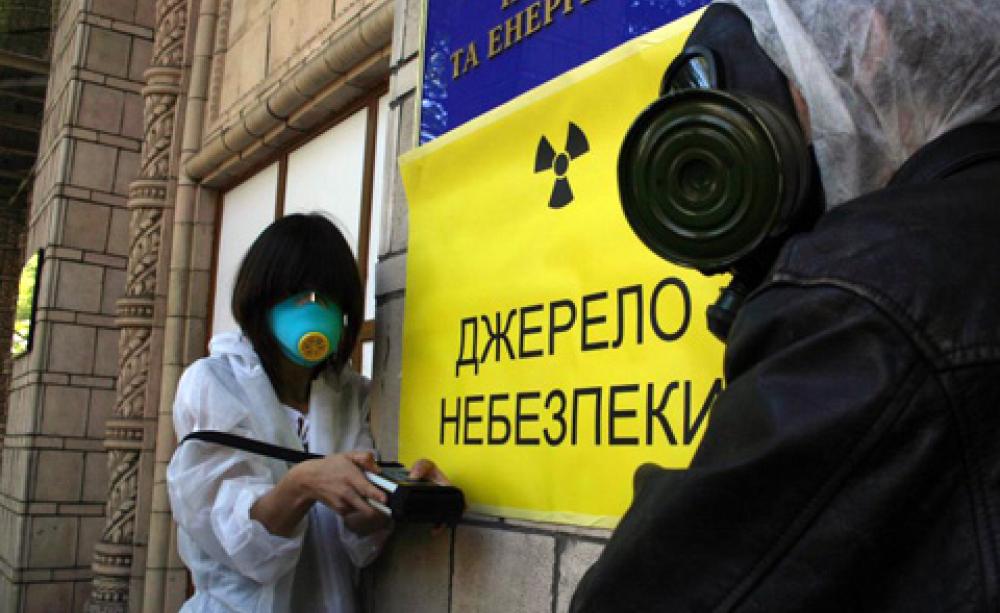 Anti-nuclear activists are opposing the prolonging of the lifetime of aging nuclear reactors in Ukraine (slogan reads: 'Source of Danger')

European countries, including the UK, are facilitating a nuclear power plant expansion in Ukraine - despite serious concerns over safety - with the ultimate ambition of exporting more energy to Western Europe, it has been claimed.

Twenty-five years after the Chernobyl disaster a number of safety risks surrounding the nuclear industry in the country remain, including the costly and delayed disposal of radioactive waste and a cost-saving measure to extend the life of older nuclear reactors by 15 years.

In Europe, following the leak of radioactive material at the Fukushima plant in Japan, Germany has decided to postpone a decision to extend the life of its nuclear reactors. It has also temporarily closed some of its older reactors down. However, it has been happy to finance the expansion of nuclear power generation in Ukraine, some of which could in the future be exported back to the country to meet its energy needs.

Over the past 5 years, Ukraine has been upgrading its high-voltage electricity transmission lines as part of its 2030 energy strategy, which aims to almost double the number of nuclear reactors in the country from 12 to 22 over the next 19 years.

The expansion has been given almost one billion Euros of investment from the European Investment Bank (EIB) and the European Bank for Reconstruction and Development (EBRD) - with the EU keen to focus support for 'Trans-European Energy Network projects' which help to increase the ability of Ukraine to export energy to Western Europe. In its 2030 energy strategy, the government said it plans to produce 25 TWh of excess electricity - close to Slovakia's total electricity generation in 2007.

However, the expansion of Ukraine's nuclear power sector is going ahead despite ongoing safety problems in the industry. The country has still not created an 'adequate' plan for the disposal of radioactive waste, according to campaign groups who say safely disposing the waste will cost more money than the Ukrainian nuclear industry has generated in its entire existence.

'Industry propaganda trys to make us believe it is a cheap energy but they are ignoring the problem of waste disposal and leaving the escalating costs for future generations,' says Yury Urbansky, from the National Ecological Centre of Ukraine, who says the nuclear industry is relying on the grid upgrade and promise of exports to expand in a country where energy consumption is fairly static.

As part of its nuclear expansion, the Ukraine has also decided to extend the life of its existing Soviet-era reactors from 30 to 45 years. Observers say this is in part a cost-saving measure as the government does not have the money or facilities to decommission the radioactive waste.

The environmental watchdog Bankwatch, which is highlighting the EU's indirect support of nuclear in Ukraine, says ageing power plants are reporting more minor emissions and leaks. In January 2011 an accident at one reactor saw a temporary part-closure although state officials said the facility remained safe and posed no radiation threat.

'Twenty-five years after Chernobyl it [the Ukraine] has not solved technically and financially the problem of management of radioactive waste and spent nuclear fuel. Furthermore, without enough resources to fulfil its utopian strategy of constructing 22 nuclear reactors by 2030, the government is now extending the life of existing nuclear blocks, which increases the risks of operational accidents,' says campaigner Fidanka Bacheva-McGrath.

As well as facilitating the expansion of nuclear power the upgraded transmission lines have also been the focus of fervent opposition from locals, as they have been routed through national parks and villages without compensation or prior agreement from local communities.

Bankwatch says it was wrong, given the risks and opposition, for the EU to be investing in upgrading transmission infrastructure in Ukraine to import 'cheap' nuclear power from the country to meet its own energy needs. The rising influence of the nuclear lobby in Europe, say campaigners, with its claims of a low-carbon solution to climate change targets, had left decision-makers 'blind and deaf' to the well-known risks of nuclear power.

'Unfortunately it takes a disaster like the one in Japan for EU's decision-makers to acknowledge these risks. As the Chernobyl accident showed 25 years ago, the EU is vulnerable to the impacts of possible nuclear disasters in its immediate neigbourhood,' says Bacheva-McGrath.

'The EU should not encourage this policy for the sake of imports, but should instead invest in increased energy efficiency and renewable energy, both in its member states and in its neighborhood,' she adds.

The EIB says it is aware of the concerns being raised but that any financing for projects was subject to the bank's environmental and social standards. The EBRD says it only invests in transmission line upgrades in Ukraine and has 'no mandate' from the European Commission to expand nuclear power in the country.

'These projects are very important to the country which suffers from old and inefficient power transmission infrastructure,' said a EBRD spokesperson.