In season now: what to eat during April

Celebrate Easter by tucking into a plate of seasonal Jersey Royals. Albert Bartlett’s Tim Ward explains why they’re wonderful and rounds up his April favourites

April begins with a day of fun and jokes (April Fool’s Day) and then quickly turns into succession of holidays guaranteed to boost sprits in time for the London Olympics. With the Queen’s 86th birthday, Easter, St. George’s day and of course, the first wedding anniversary of the Duke and Duchess of Cambridge, April looks set to be a month to celebrate all things British. And what could be more British, or indeed worth celebrating, than the start of the Jersey Royal potato season? ‘In April you see teams of people in the fields with a winch, and a plough and a tractor,’ says Tim Ward, operations director with potato purveyors, Albert Bartlett. ‘It’s really quite unique and different from anything else in agriculture and it’s always an exciting time for us when you start seeing those green fields turning into brown soil because the crops are coming out the ground.’

Jersey, home of the new potato, is only nine miles by five and half of it is covered with potato fields. Working with 11 growers, Albert Bartlett is responsible for about 40 per cent of the Jersey Crop.  ‘Within the fruit and vegetable trade there are very few seasonal vegetables now really,’ says Tim. ‘You get British asparagus and British strawberries but you can still get that product year round whereas Jersey Royals are only available for a short time - April, May, June, sometimes July. At any other time of the year, they are just not available and I think that’s great; we’ve lost some of the seasonality in food.’ Along with Jersey Royals (of course), here’s Tim’s take on April’s seasonal delights.

Jersey Royal potatoes
Rich in flavour, history and heritage, Jersey Royals are one of the first truly new season potatoes and herald the onset of spring. ‘A combination of things makes them special,’ says Tim. ‘Firstly, the climate: we are 100 miles south of the UK mainland, on an island [made of] granite rock that slopes north to south so we get a lot of sunlight, Some of the best practices in farming are put into growing the potatoes; a lot of them are hand-planted and hand-lifted, we still use traditional seaweed and a lot of the methods that have been in place for the last 132 years. It’s that care and attention that Jersey farmers give to the crop.’

Crab
One of the most versatile types of seafood, crab is fantastic in salad, pasta and sandwiches. ‘Spider crab is a bit of a local delicacy here rather than the Brown or Chancre crab,’ says Tim. ‘We’re spoilt for choice for seafood out here, and I absolutely love scallops.’ Spider crab isn’t widely available outside Jersey but the Brown and Chancre varieties are in abundance around UK shores from April. Live crabs are best to guarantee freshness, and with no licence required (and all the extra holidays) why not indulge in that old British pastime of crabbing?

Asparagus
Known for its anti-inflammatory and antioxidant benefits, asparagus has been considered a delicacy since ancient times. The British growing season is relatively short and asparagus should be eaten as close to fresh as possible due to its unique respiration rate - it perishes five times as fast as the potato, three times that of a tomato and twice that of a cauliflower. According to Tim, the best way to tuck in is by using it  ‘as a starter wrapped in Palma ham, I guess that is a lot of people’s favourite.’

Spinach
‘I’ve been getting more into spinach,’ says Tim. ‘The only problem with it is you put heaps into a saucepan and it melts down to nothing.’ One of the healthiest vegetables on the planet thanks to its significant amounts of vitamin A, C and K as well as antioxidants and folic acid, spinach is is at its freshest and most tender in spring. The younger, more vibrant leaves are said to contain more vitamin C than the later cropping variety.

Rhubarb
The beautiful pink rhizomes have a unique flavour and are packed with vitamin C. Excellent stewed (with plenty of honey) as well as in crumbles and pies; rhubarb is a great source of fibre and is crammed with diabetes-fighting vitamin K.  ‘It really takes you back,’ says Tim. ‘We used to eat a lot of rhubarb when I was a kid - rhubarb and apple crumble was fantastic.’ 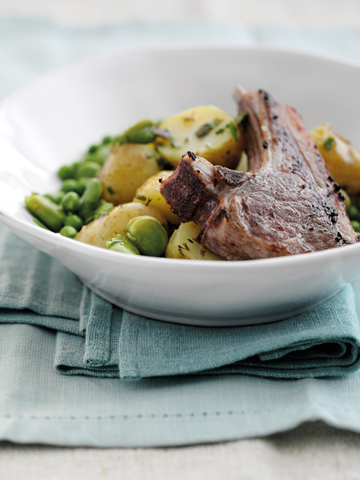 Method
• Preheat the oven to 180°C
• Season the lamb chops. Heat the olive oil in a small ovenproof frying pan and fry the lamb for two to three minutes on both sides, or until golden-brown, then transfer to the oven. Cook for six to eight minutes (for medium), or until done to your liking. Transfer onto a warm plate to rest.
• For potato, pea and broad bean salad cook the potatoes in boiling water for 12 to 14 minutes or until just tender. Drain well, and then stir in the butter and season well with salt and freshly ground black
• In another pan cook the peas and beans in boiling water and cook for two to three minutes, or until just tender. Drain well, and refresh in a bowl of iced water.  Remove the second skin from the broad beans and set aside. Add the peas and podded broad beans to the seasoned potatoes and toss gently
• Place the mint, parsley and three tbsp olive oil in a mini processor and blend. Add the lemon juice and remaining olive oil and whiz to a dressing. Add to the potato mix and toss until covered. Serve the potato mix alongside the lamb