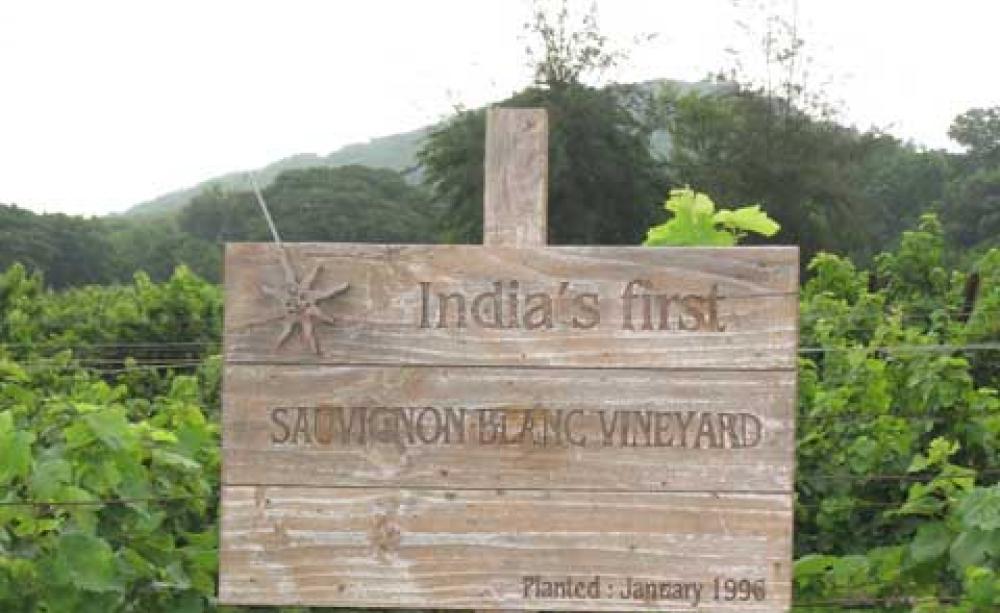 India's first Sauvignon blanc
A unique winery in Western Maharashtra is utilising water recycling, solar power and waste reduction in an effort to avoid the environmental damage linked to wine production in California

Turning left onto a paved road, the large signs reveals a change of atmosphere. For the past three kilometres, the dirt roads, shops with thatched roofs and meandering cows marked the road from Nasik in India’s Western Maharashtra state to the country’s world-class Sula Vineyards, an oasis in the desert.

Each side of the road is an expanse of land unlike any other in India. Here is wine country. Sula Vineyards was the first vineyard to open in the area, bringing wine-making in India to the attention of the world. Already, it has garnered much attention, and visitors to the vineyard here in Nasik are able to see first-hand the effort to develop and make high quality wines.

'This is just tasty wine and I have already bought three bottles,' English visitor Thomas Ulman from Bristol told The Ecologist as he sat on the balcony overlooking acres of grapes. 'It is still unknown to many Western wine drinkers, but hopefully Sula will become a household name in the years to come.'

He is one of the few visitors who took a tour of the expanse that is Sula Wines, getting a tour and a special tasting of the offerings. Below the bar, where barman Rajeev pours glasses of their latest options, including an exquisite Shiraz, the rows of bottles move quickly, with two workers sitting and watching each glass bottle as it passes by, ensuring all is in order.

But Sula has separated itself from the few other smaller vineyards who have opened shop in the area, which has quickly become known popularly as 'India’s Napa Valley' in reference to California’s wine country.

The company’s history is an intriguing one, with the first plants sown in 1999 with seeds smuggled into India from Sonoma in the Napa Valley. Sula then expanded from the original 30 acre family estate to about 1500 acres, both in Nashik as well as in nearby Dindori.

Since its inaugural crop in 1999, Sula has seen its distribution extend across India - and it is now pushing for international distribution.

R. M. Krishna, one of the Sula Vineyards guides and a manager of the facility at Nasik, said that when they first developed the  crop, they wanted to ensure they would deliver on two aspects of production, much as California wineries have done in recent years.

'If you look at our grapes and this land, it is not the most ideal for growing wine, but we have discovered that it can produce the best quality wines that compete on a regular basis with internationally accepted companies and vineyards,' he began, waving his hand at the endless rows of grapes that have become the staple of the Sula brand.

'We have a lot to offer now and are growing annually in our production and have won a number of awards,' he added.
Sula recently won silver for thier Sauvignon Blanc at Decanter World Wine Awards 2011, and co-founder Rajeev Samant hopes for more growth, but with the environment in mind.

'We have established ourselves as the top company in India for wines and are currently utilizing recycled glass for our bottles and also ensuring that our waste does not cause unnecessary environmental destruction like it has in California,' he told The Ecologist.

Samant has a knowledge of California’s wine producing industry, which is home to some 90 percent of the American market. In recent years, the industry has been working hard to overcome its growing carbon footprint and is looking for a sustainable role to help battle climate change.

According to a 2006 report published by the National Academy of Sciences, areas suitable for grape growing could be reduced by as much as 81 per cent by the end of the century as a result of climate change.

Samant is keenly aware of the troubles facing California, which has led him and Sula to put back what they take. He said that the excess water they see from the wine production is recycled and treated in order to 'maximize the reusing of all aspects of the process.'

One of the key aspects of this water recycling is to 'put back as much of the waste that comes with the production so it is not left to ditches and adversely affects the surrounding environment,' Samant argues.

Pointing to California’s troubles, Samant said that he watched how a number of fellow companies began to move toward eco-friendly wine-making, and made it something that Sula can achieve.

A number of wineries in Napa are taking advantage of new technologies that are reducing their carbon dioxide emissions, by as much as four metric tons annually. Fetzer, the leading eco-winery in California, has erected a large solar power system, generating 1.1 MM kilowatt-hours of clean energy which equals the planting of nearly 200 acres of pine fir forest.

For Sula, they are utilising solar energy and biodiesel as much as is feasibly possible, and in India, solar power is gaining steam quickly. They already have a number of solar power stations that help with reducing electricity costs and 'improves [the] carbon footprint greatly.'

But most important to Samant and Sula Vineyards is the use of their 'clean-up' policy that sees waste contained to the grounds of the vineyard. India is notorious for its garbage problem, which can be seen across most areas of the country. The result is that this garbage and rubbish waste seeps its way into water subsequently used for watering plants and crops across the country.

Sula sees their future progress tied with developing a local environmental consciousness that can transcend the current status quo of large companies, who often see India’s land as one large rubbish disposal zone.

Tour guide Krishna is excited about what Sula is doing with the local environment and its progress in 'giving back.' He said Sula 'makes certain all of our waste is properly disposed of and that it does not find its way into the water systems of Nasik. Too often, large companies, especially outside the city limits in India, don’t seem to take note of the surrounding environment, but we do.'

He said the vineyard does not over-use areas in its planting and growing process, ensuring that each season’s crop of grapes is changed from one growing period to another. 'This creates better soil and does not over tire the soil, which we have seen in other parts of India and the world, where many vineyards simply used up the land they were on.'

Water conservation is key to improving the company’s footprint. They have improved hose nozzles, high efficiency barrel washing and cleaning technology as well as using ponds to store rainwater, which has seen the overall use of water reduced dramatically.

Samant argued there is still much work to be done on the environmental practices of the vineyard, but believes Sula has shown that even in the largely dry environment of Nasik, creating world-class wine with an eco-friendly nod can be achieved and done so with progress.

'Sula will continue to be the leading Indian winery if we maintain our concentration on what we are doing, both in the wine-making and in our focus on local environment strategies,' he argued.

Across the vast expanse that is Sula Vineyards, the rows of green grapes juts forth from a land that seems unsuited to wine-making, but it is here that wine has been revolutionised using the latest technology to produce top shelf products that have seen visitors from across the globe, all with a minimal carbon footprint.