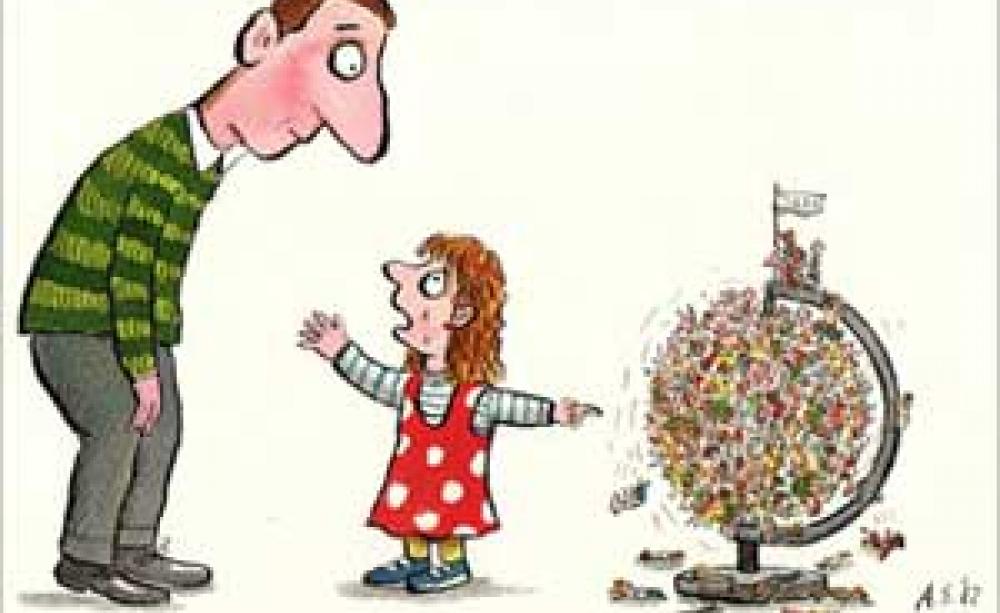 Rio+20. It came, sputtered briefly, and went. It was hard for anyone to summon up much enthusiasm in advance, and the lack of any kind of serious preparatory process condemned those who most hoped for a substantive, positive outcome to an inevitable disappointment.

So for those who are still feeling a little let down, let me just add one additional reason for disappointment: how is it that the entire Rio+20 process came and went without any serious attention being given to one of the most important sustainability challenges today – namely, population?

I could of course have asked that question at any time over the last 40 years, pretty much since the time of the first UN Conference on Environment and Human Development in Stockholm in 1972 – when population was a big, controversial topic of debate.

So what exactly is going on? Why is it that the insights that we now have about the importance of population continue to go largely ignored – not least by the vast majority of environmental organisations whose ostensible purpose is to secure the foundations of the natural world to ensure good lives for people today and for people tomorrow? Forgive me if this is old hat, but let me just share with you a few of those insights.

Back in April this year, The Royal Society published its report People and the Planet. Over the preceding 18 months, I’d been lucky enough to be part of the working group that co-authored the report, which was based on the work of 22 brilliant scientists from all around the world, coordinated by a small group of Royal Society staff who had to process hundreds (and I do mean hundreds!) of detailed research reports. One of its key recommendations was this: “Population and the environment should not be considered as two separate issues. Demographic changes should be factored into international meetings such as the Rio+20 Conference.”

My own feeling is that this recommendation was included just to show willing. But the truth is that all of our recommendations are fairly anodyne, drafted in the sure knowledge that politicians would be disinclined to listen to whatever we said anyway! It’s the quality of the Royal Society’s scientific analysis that really matters here, and that will resonate powerfully in all the key UN agencies, research institutions and funding bodies where it most needs to be heard.

I only wish it might be heard as loudly amongst leading media commentators. It’s incredibly bad for my blood pressure that I end up shouting at the TV or radio every time I hear another portentous report about drought or famine from Niger, the Yemen, the Horn of Africa and so on – without the merest hint that these are often the countries that still have above-average population growth and average fertility.

These reports eloquently comment on unpredictable and declining precipitation in these countries, or on overgrazing, deforestation, soil erosion – the usual litany. Accelerating climate change is usually in there somewhere. But then not a word about the huge increases in the number of people trying to eke out livelihoods from already fragile, degraded environments.

If that sounds politically incorrect, then good. I am now much more exercised about the morally incorrect (indeed, morally indefensible) stance still taken by most environmental NGOs and opinion-formers. A quick statistical reminder: There are still more than 200 million women who would prefer to have no more children but who have no access to modern contraception. More than a third of all conceptions in a year are not planned. That’s an estimated 80 million a year, leading (amongst other things) to the tragedy of 40 million abortions every year.

The World Health Organization has estimated that around 40% of the 1,000 women who die every day – avoidably – in childbirth did not want the pregnancy that killed them. That’s 400 women a day. Note to the politically correct population naysayers: you can’t die of a pregnancy you don’t have.

On what possible basis would we not want to prioritise funding to address this shocking toll on some of the world’s poorest and most hard-pressed women? Arguments against prioritising population issues in this way keep coming back to three main reasons:

A voluntary, rights-based approach is the only way to promote effective family planning. In other words, making family planning and other reproductive health services freely available and fully accessible to everyone – and empowering and encouraging them to use it.

I just wish that those who are obsessed with the issue of coercive contraception spent as much time focused on the issue of coercive procreation – seen through the eyes of the tens of millions of women violated both by involuntary sexual relations and by their lack of access to contraception. “You’re just another well-off, middle-class white man seeking to keep poor black and brown women in their place.” This is almost too stupid to warrant a reply.

But to those who still incline to this kind of facile invective, may I urge you to get hold of the latest Living Planet Report from WWF. Produced in collaboration with the Zoological Society of London and the Global Footprint Network, the biannual Living Planet Report provides the most authoritative account of the growing gap between living sustainably on planet Earth and living unsustainably on planet Earth.

By monitoring thousands of different populations of more than 2,600 species on an ongoing basis, the Living Planet Index tracks the impact of accelerating levels of consumption on biodiversity. The index has declined by around 30% since 1970, and by 60% in the tropics.

Alongside that, the footprinting analysis produces per capita ecological footprints for every country on Earth – which is what tells us how overdrawn we are on Nature’s account. We are already using 50% more resources than the Earth can sustainably provide, and unless we change course very fast indeed, even two planet Earths will not be enough to meet our burgeoning economic demands (on a business-as-usual basis) by 2030.

And it’s the poor who will suffer most. That grotesque double-whammy (collapsing ecosystems in the poor world, and rising ecological footprints both in the rich world and in all developing and emerging countries) dramatically reduces their life chances. Let alone those of their children.
So please do have a look at the Living Planet Report – or get hold of the very helpful summary version:
www.wwf.org.uk/what_we_do/about_us/living_planet_report_2012

And then if you feel like congratulating WWF on the brilliant work it does in researching and producing this critical reference document, you might also like to ask why it too has so little to say about population!
It’s not until page 121 of this 150-page blockbuster that you find any substantive reference to population at all. And even then, it’s in the form of such polysyllabic ‘motherhood and apple pie’ generalisations as to raise the possibility of self-parody. Judge for yourself:

“Ensure universal access to gender-sensitive reproductive health services and information, reduce child mortality and support the empowerment of women and young girls through greater access to both higher education and employment opportunities.”

To which the only possible response is this: GET A GRIP, WWF! You all know, just as much as I know, that continuing population growth and high average fertility in many parts of the world remain the root cause of the loss of biodiversity and depletion of natural resources. Yet you still refuse to address this head-on. That’s what The Royal Society’s Report People and the Planet tells WWF and every other environmental organisation:

But I can guarantee that if you rang up the Chief Executives of all those environmental organisations to ask them about People and the Planet, not one of them would have read it.

Jonathon Porritt is Founder Director of Forum for the Future. www.jonathonporritt.com
Download The Royal Society’s People and Planet report from http://royalsociety.org/policy/projects/people-planet/