Can the Kathmandu Valley be Saved? 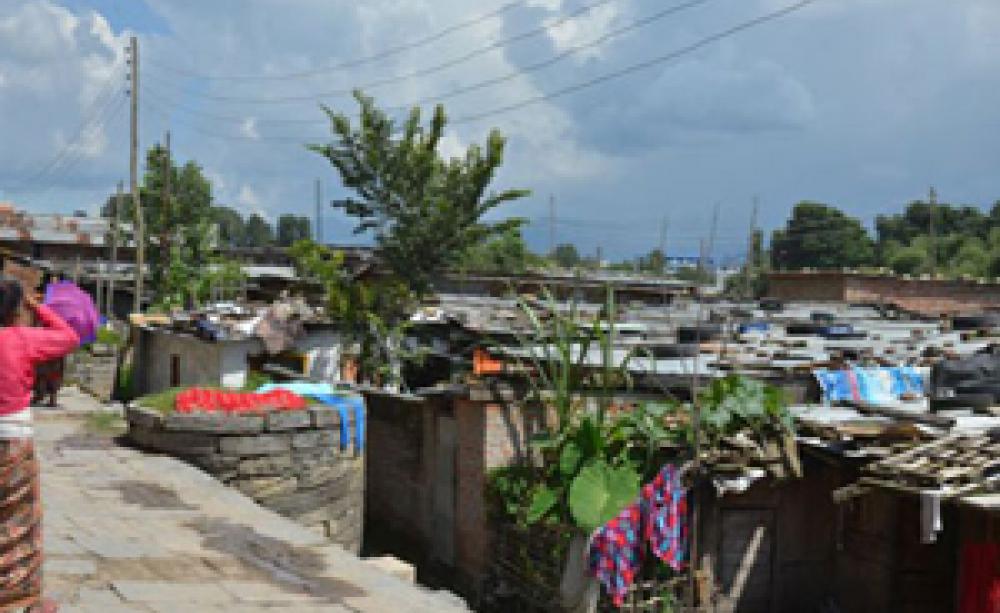 Daily life is a real struggle in the shanty towns along the muddied and litter-strewn banks of the Bagmati river, Nepal
The once bustling Bagmati river has become the focal point of Nepal’s struggle to bring modernity to this once isolated region. And the environment is struggling to survive, writes Joseph Mayton.

KATHMANDU: It is “clean-up” day on Nepal’s major river, the Bagmati. Uniformed military personnel troll the banks of the river, picking up plastic bags and rubbish that has found its way onto the sides what once was the main thoroughfare for the Kathmandu Valley. Turning, with pieces in his hand, one officer lightly tosses the rubbish into the already polluted water.

“It goes down the river and gets out of here,” he says calmly, as if there is nothing wrong with his actions. He’s following orders anyway. This is the clean-up effort the Nepal military participates in on a monthly basis in their effort to “green the river,” as the officer puts it.

All the rubbish moves slowly through the maze of boulders that protrude from the water. This once bustling river has become the focal point of Nepal’s struggle to bring modernity to this once isolated region. And the environment is struggling to survive. Scientists have already questioned that even if action is taken immediately whether the Kathmandu Valley can survive its destruction.

Maybe a kilometer or two down the muddied banks of the river lays a shantytown. Thousands congregate in aluminum-topped homes, tilling what little earth around them is usable. For Bidhya Pal, life is a daily struggle. Rubbish builds up near her home, the stench of mold is gripping as she looks out over the vast area that had once been the cradle of Nepali life. Today, for the 51-year-old mother of four – she looks vastly older due to her circumstance – wonders why the government is not helping.

“We face all this rubbish every day. The people come and say they are cleaning, but really they are just moving it and it doesn’t make life easier,” she said, slumping down in her chair and sipping her tea as the sun begins to dip behind the hills that mark the edge of Nepal’s capital.
Even the government is not too optimistic about the future of the valley, which comprises some 220 square miles in central Nepal, including the capital, Kathmandu and is largely the cultural and political epicenter for the small South Asian country. Unfortunately that has not kept it safe from destruction.

The country’s Secretary of the Ministry of Environment, Krishna Gyawali, said his ministry and the government are working with numerous aid agencies to help clean up the valley and ensure it persists for generations to come. But those efforts are being stymied by a lack of resources, he admitted.

“We are just beginning to really understand the affects that mining and over-working the land has had on the area, so it is an uphill battle for all of us interested in making Nepal’s environment better,” Gyawali said.
For him, the valley is an almost microcosm of the struggle to get things done in the country. He argued that too often work projects and efforts to combat environmental destruction of the valley and the Bagmati River get caught in red tape and corrupt practices.

“We are working hard toward ending this destruction political climate, but it takes time, and according to independent reports, we just don’t have that kind of time to wait around,” he admitted, adding that a number of issues, most notably the groundwater pollution as a result of mining has made it difficult to change what is becoming a pressing fear that the area could be uninhabitable, or at least massively reduced, in the near future.

“It is a real battle to get projects off the ground. One we have been successful on is a subsidy program that gives locals funds in order to change historical practices that have caused much damage,” he said, referring to a ministry program launched in 2010 that has been largely positive in helping residents in the area to end erroneous dumping practices and has seen companies work toward new means of rubbish disposal. Waste is on the decline.

According to a 2011 Johns Hopkins research paper, “Water resources are the largest natural resource in Nepal and groundwater accounts for a large share of the water available for daily use.”

But, there is a catch. As a result of the country’s poor infrastructure and a lack of overall awareness, much of this water has become polluted. The main culprit is little or no government oversight of dumping procedures. Companies simply toss waste into the Bagmati, which then travels downstream, affecting and polluting water resources for the valley, where over two million people now call home.

Although more research and studies are needed, Nepali environmental activist Munjushree Rama argued the future can be bright.
“We just have to get the government, the people and NGOs working together on similar goals. The status quo simply isn’t working and we are seeing the destruction of our land and it will change what Nepal is and who we are,” he said.

With over 130 monuments, temples and other places of pilgrimage for Hindus and Buddhists alike, this UNESCO World Heritage Site needs help, but for many observers the movement to help change the destructive nature that has met the Kathmandu Valley is seemingly too little, too late.