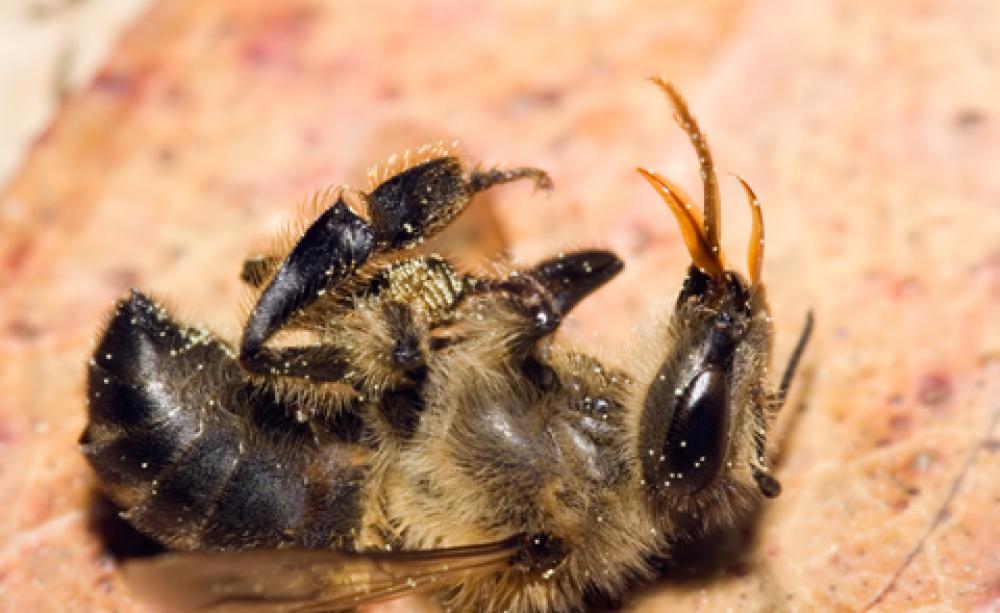 In the US bee numbers have been decimated by almost 50% since October 2012.

The Ecologist's Lorna Howarth reports on news and action from the environmental frontline....

Across the world there’s a stand-off arising between agrochemical companies such as Bayer and Syngenta who insist there is no link between neonicotinoid pesticide use and escalating bee deaths, and civil society and many scientists who believe there is a clear link.

Worryingly, despite a robust campaign by Avaaz where 2.5million global citizens supported the European Commission (EC) call for a two-year ban on neonicotinoids after the European Food Safety Agency  (EFSA) deemed their use an “unacceptable risk,” the European Union (EU) failed to uphold the proposal.

A Bayer spokesman who described the company as a "responsible corporate citizen" said, "The EC relied too heavily on the precautionary principle, without taking the principle of proportionality into account," meaning the wider economic effects that banning pesticide use may have. A study funded by Syngenta and Bayer suggests a blanket ban on neonicotinoids would cut EU net wheat exports by 16% and lead to a 57% rise in maize imports, costing the EU economy €4.5bn per year.

However other research has put the financial contribution of insect pollinators to the EU farm sector at €22bn a year, and €153bn globally which far outweighs any negative effects a ban may have.

Prof Dave Goulson, at the University of Stirling, who led one of the key studies showing that neonicotinoids harm bumblebees refutes any notion that neonicotinoids are safe, saying, "The independent experts at EFSA spent six months studying all the evidence before concluding there was an unacceptable risk to bees. EFSA and almost everybody else – apart from the manufacturers – agree this class of pesticides were not adequately evaluated in the first place. Yet politicians choose to ignore all of this."

In the US, neonics (as they have been termed) are one of many concerns beekeepers have: a ‘mystery malady’ has decimated bee numbers by almost 50% since October 2012, and the jury is out as to what has caused this alarming die-off. Mites and viruses are often cited as the key culprits, but there is a growing awareness that the ‘chemical soup’ of pesticides, herbicides and fungicides that are repeatedly sprayed on the food crops that bees pollinate has a huge impact.

The New York Times reported recently that: “The explosive growth in neonicotinoids since 2005 has roughly tracked rising bee deaths.” But still the voice of the corporate lobby denies these findings. A spokesman from CropLife America said the company “supports the notion that these products [neonicotinoids] are safe and not contributing in any measurable way to pollinator health concerns.”

Beekeepers in the US who are on the frontline of colony collapse believe that it is the number of times that food crops are sprayed with pesticides that is the issue. Mr Adee, a beekeeper in the US gave a telling analogy: “If you have one shot of whiskey on Thanksgiving and one on the Fourth of July, it’s not going to make any difference. But if you have whiskey every night, 365 days a year, your liver’s gone. It’s the same thing.”

The good news is that the EC ban could still go ahead within months if the Commission takes the decision to an appeal committee. In the original vote France, Italy, Spain, the Netherlands and Poland, voted for the ban, while the UK and Germany abstained, with Hungary and Romania leading those opposed. If the appeals committee has a similar ‘hung’ vote the EC could enforce the two-year ban and that would give scientists a chance to see if bee numbers improve.

Whether any ban in the EU would have a knock-on effect in the US where beekeepers are struggling to find enough bees to pollinate this year’s almond crop is another matter. The corporate lobby is equally strong there.

In an interesting, and some would say cynical move, in the EU, Bayer and Syngenta have proposed a plan to encourage farmers to leave a wider margin in fields to allow for the growth of wild flowers and other nectar crops for bees – whilst still maintaining regular neonic spraying on the crops.

Avaaz Campaign Director Alice Jay was sceptical about this idea: “Putting the pesticides industry in charge of protecting bees, is like putting a fox in charge of a henhouse," she said. "No one knows for certain what's killing our bees, but leading scientists have powerful evidence pointing to these pesticides. Protecting bees and our countryside must come before the profits of the pesticide industry."

Lorna Howarth is a writer and environmentalist. She is a contributing editor to Resurgence & Ecologist magazine and the founder of a small independent publishing agency:The Write Factor www.thewritefactor.co.uk Contact: Lorna@resurgence.orgIf you found this article interesting and enjoy reading articles on the Ecologist website, please consider making a donation to support the continuation of this free service.