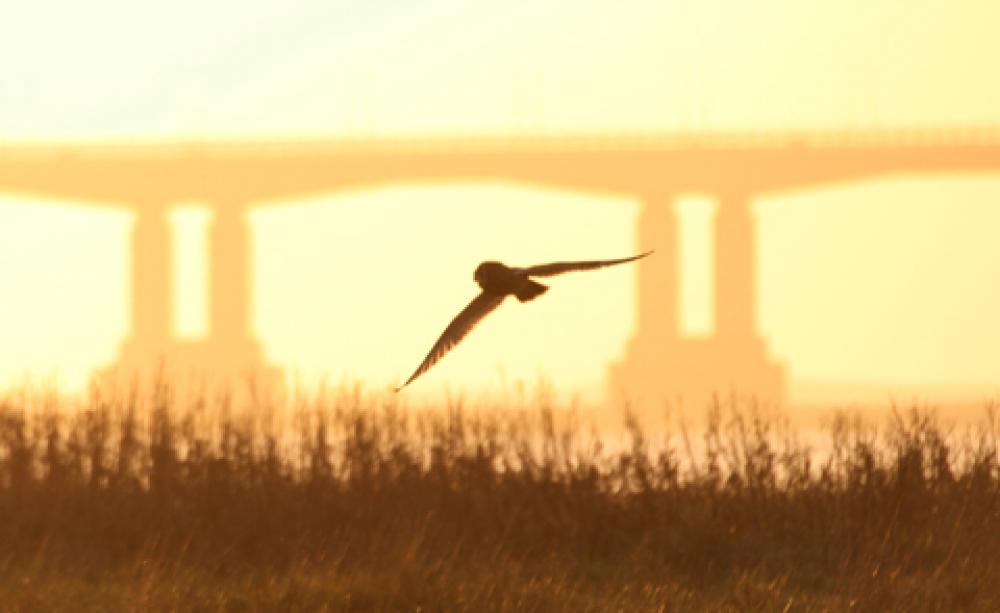 A short-eared owl flies next to the Severn Estuary, Gloucestershire, with the Severn Bridge in the background. By Matt Adam Williams, 2009.

Naturalist and wildlife photographer Matt Adam Williams asks whether childhood experiences are the key to the long-term health of nature and the conservation sector........

Although in his eighties, my grandfather still walks the Malvern Hills on the Herefordshire/Worcestershire border, often reporting back to me about hearing a cuckoo or glimpsing a green woodpecker. His life-long connection to the outdoors helped to inspire my own love of nature from a very early age.

When he was growing up, nature and green spaces were on his doorstep, and the chances to explore them were staples of childhood. But, more than any generation that has gone before them, today’s children are disconnected from nature; their opportunities to learn about, and grow to love it, are more limited than my grandfather’s or even my own.

Sir David Attenborough has said that  “no one will protect what they don't care about; and no one will care about what they have never experienced”. His insight touches upon a key threat to the conservation movement and to the natural world.

Experiencing nature can lead to a lifelong compassion for it, and this is particularly true in early life.  At the same time as environmental challenges increase, children and young people are becoming more detached from nature - what’s often termed ‘Nature Deficit Disorder’. This is perhaps the gravest threat to the long-term health of conservation and the natural world.

Conservation victories in recent decades have been many, from successful species re-introductions and important policy changes to the designation of vast protected areas. But the sad truth is that biodiversity loss continues apace and greenhouse gas emissions continue to rise, jeopardising the futures of many species and habitats.

The greatest risk is that today’s young people grow up disconnected from nature, and thus when they become the citizens and decision-makers of tomorrow, value it less than any prior generation. Underlying this is what could be seen as a crisis of values - our institutions, ways of life and economic systems fail to meaningfully value nature.  This directly affects the experience children have as they grow up. In a consumerist society the values which often drive attitudes, behaviours and policies are those focussed on profit, consumption, wealth and status.

And these values also lie at the root of anthropogenic climate change, biodiversity loss and damage to the natural world. When nature is ascribed a value it is very often through the assignation of financial value, through privatisation or its incorporation into market systems.

Sometimes conservation organisations are partly responsible for this, focussing much of their effort on high-level political lobbying and advocating the ‘ecosystem services’ nature could provide in a market system. Such problems will only worsen as a generation of children disconnected from nature matures into adulthood - this is a vicious feedback circle.

We need a shift in the underlying way that we value nature and to turn around the tide of declining passion and love for nature amongst young people. Only by achieving such a cultural shift in values can the conservation movement guarantee much more significant long-term success.  It will be by transforming people’s (early) experiences of nature that we will most effectively change how (much) they value it. For people to acquire deeply held environmental values they need direct contact with nature.

Evidence shows that early childhood experiences are often the most effective at generating deep attachment. The conservation sector needs to find ways to restore a sense of nature’s intrinsic value, and particularly to ensure that today’s children have access to it. Providing them with the opportunities to appreciate nature and develop a love for it are vital both for nature’s future health, and also a right and pleasure currently being denied to many.

There is clear evidence that experiencing nature has measurable benefits for children’s physical and mental health and wellbeing.  Symptoms of attention hyper-deficit disorder can be reduced by up to 30% in children who spend more time outdoors. Research has found that interaction with others and the requirement for team-building and cooperation means that access to the outdoors increases children’s interpersonal and social skills and confidence.

Education about and access to nature has been found to reduce levels of aggressiveness, at a personal level, a household level, and a community level. Children’s ‘attachment to place, civic engagement and environmental stewardship’ are all enhanced by environmental education. Time spent outdoors is also the strongest link with levels of physical activity, and childhood attitudes to outdoor exercise are strongly predictive of levels of physical activity in adulthood.

However, since the 1970s the area around a child’s home where they are allowed to roam has declined by 90%. Today only ten per cent of children walk to school, most often accompanied by a trusted adult.  Structural changes such as heavier traffic combined with (the perception of) increased danger has resulted in children’s worlds shrinking into their electronically kitted-out bedrooms. Furthermore, many children in more socially deprived urban areas simply don’t have access to a nearby green space.

Early childhood is a key period for children to experience nature and form a bond with it.  As the result of a life-course study “early experiences with the natural environment may indeed set a child on a trajectory toward environmentalism” and that this “may be critical to the future of healthy children, healthy adults, and a healthy planet”.

Evidence suggests that when it comes to encouraging a passion for nature there is a limited time window for intervention. Children pass through three ‘Ages’ - the first from 0-5 years old, the second from 6-11, and the third from 12-18.

Giving children access to the outdoors during the ‘second age’ can embed a lifelong love of nature, as it’s when children are exploring the outside world, and for the first time forming memories into narratives.  By the time children reach the ‘third Age, the window of opportunity has, to a large extent, closed.

Some conservation organisations are already moving in the right direction.  They have clearly grasped the importance, to the conservation sector’s long-term prospects, of childhood connections with nature, and also seem attuned to heightened receptiveness at an early age.  For example, the National Trust’s ‘50 things to do before you’re 11 3/4’ is focussed on classic experiences of nature including rolling down a grassy hill and flying a kite.

The Royal Society for the Protection of Birds’ Every Child Outdoors work and report recognises the growing importance the conservation sector accords to this issue. The RSPB already does significant work in the area of outdoor learning for school children.  Furthermore,  RSPB has recently joined in partnership with National Trust as part of the Natural Childhood project, which aims to work towards wider and deeper levels of children’s engagement with nature.

There are plenty of other good examples of third sector interventions to improve children’s access to nature at school. Projects such as Sustrans’s Free Range Kids campaign aim to liberate children to be more active outdoors in their local area.  The charity SEEd works to support schools undertaking environmental and sustainable education. Groundwork is focussed on improving communities for the people who live there by helping them to create gardens, allotments and parks.

To successfully restore childhood experiences of nature at a wide scale and to deeply embed passion and concern for the natural environment will require a brave and bold shift of focus by conservation organisations. Instead of time and money going towards high-level policy change and the conservation and restoration of pristine habitats in rural and wilderness areas, more resources will need to go towards providing communities, particularly in deprived urban areas, with safe and accessible green space – that might at times be of overall low biodiversity value.

Nature reserves should foster a hands-on approach to exploring the natural world, rather than the “take only photographs, leave only footprints” mantra that has become popular among some naturalists.  The root causes of our over-consuming culture may need to be tackled as well. Conservation organisations could decide that they need to work on unlikely policy areas, such as traffic calming in urban areas, encouraging more stable employment rooted in a single location that allows attachment to place to flourish, or even on tackling advertising aimed at children.

By taking such steps conservation organisations would signal a true and significant commitment to the work they have already started.  Only by doing this will they be able to restore the access to nature that previous generations of children enjoyed and ensure that tomorrow’s citizens deeply value the environment and help to protect and restore it.

Matt Adam Williams is a naturalist and wildlife photographer;

If you found this article interesting and enjoy reading articles on the Ecologist website, please consider making a donation to support the continuation of this free service.