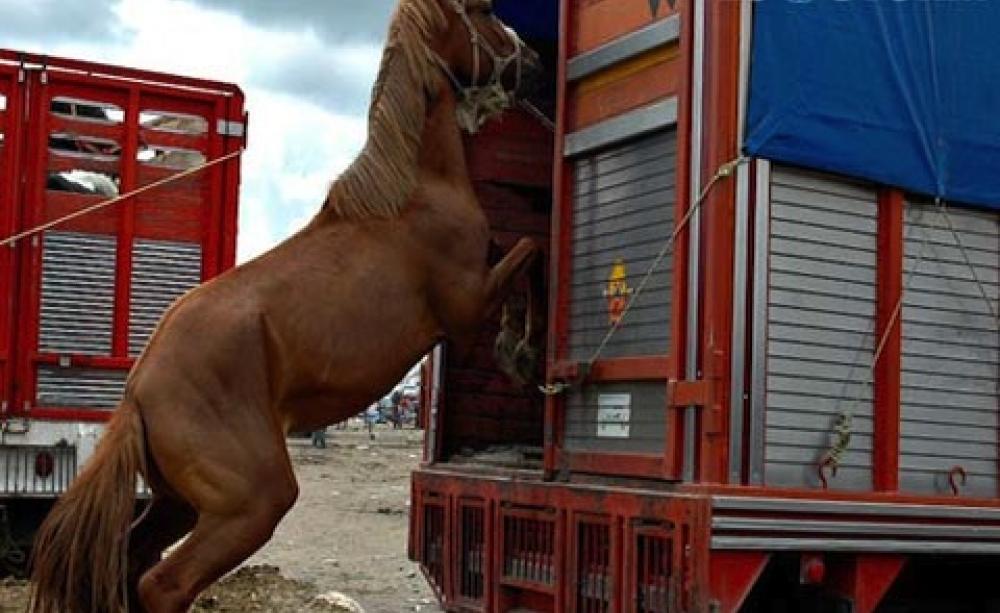 Campaigners say the live transport of horses from the US to Mexico is cruel. Photo: Ecostorm/Handle With Care.
Few Americans are aware that their country's horses are being exported and slaughtered abroad - often in appalling conditions - to supply European taste for a meat that's shunned at home. Andrew Wasley reports

Herded down a concrete shute, the horses -- black and brown and grey; fat, healthy, thin, lame -- have little idea of the fate that awaits them. But one by one, the horses are separated from those behind, a metal trapdoor swinging down to confine each to a metal box. There's blood and filth on the walls and floor. Flies buzz.

A man leans over the horse -- the animal freezes at first, then jerks forward slightly, obviously terrified -- and stabs a knife forcefully into the top of the horse's head. The horse crumples to the ground and the man stabs it again. The side of the box opens, discharging the body onto a stained floor. A metal chain is hooked around a hoof, the horse swings up and onto a moving production line. Men set upon each body as they come through, slicing away skin and tissue and butchering the exposed flesh.

The footage illustrating this grisly scene in a Mexican abattoir offers a rare glimpse into a brutal and secretive trade that few Americans are aware of -- the export and slaughter of homegrown US horses to supply a meat that's shunned at home but popular with diners overseas. Each year, thousands of horses -- abandoned pets, ex-racehorses, farm animals -- are rounded up and trucked across the country south into Mexico, or north into Canada, for killing and processing and dispatching abroad, many to Europe, a major hub of horsemeat consumption.

It's a murky and often-informal business, with numerous buyers, sellers and middlemen in on the game. And it's part of a much bigger, international trade in horses and horsemeat now in the spotlight in the wake of the European horsemeat scandal. This was initially triggered by the discovery of equine meat in "beef" burgers on sale in Ireland and the UK, and has now widened to include numerous meat products.

Seizing their chance, long-time critics of the horsemeat industry have stepped up efforts to close the trade down, citing appalling horse suffering and health risks to humans through controversial drugs entering the food chain.

For welfare campaigners, the cruelty begins well before the slaughterhouse. Most horses destined for the international meat market begin their journey being trucked to auction houses across the US. From there, they are transported on to feedlots, and then exported across the border to slaughter facilities in Mexico or Canada. Activists say that horses are frequently crammed into vehicles -- many not suitable for carrying livestock -- and forced to endure lengthy journeys without adequate food, water and rest, leading to injuries and exhaustion.

Graphic pictures show a number of other horses sprawled on the ground, apparently too sick to get up, and an aborted foal abandoned in the dust. Conditions were so bad that investigators say they pleaded with the auction authorities to euthanise a number of the horses.

Cheryl Jacobson, from the Humane Society of the United States (HSUS), says such scenes are all too common in the US horse trade -- and blames lenient penalties for fostering a culture of poor treatment: "As at [the New Mexico auction] we've seen that if they get caught for animal welfare problems the costs incurred are still not [a deterrent], it's still worthwhile."

"It's the same down the slaughter pipeline, with middlemen buying at auction and horses being shipped on trailers not in a good enough condition... [if they get caught] for transportation offenses they just start up a new business," she says. "The fines are not collected and they get away with it until caught."

The owner of the New Mexico facility investigated last year is believed to truck some 10,000 horses to Mexico annually, part of the estimated 100,000 animals that are sent to Mexico and Canada each year. In turn, these countries supply about 15,000 tons of horsemeat to Europe annually in a trade worth as much as £40 million (over $60 million).

Horsemeat has never been popular with American consumers. There's been a de-facto ban on slaughtering horses domestically since 2006 when the federal government withdrew funds for inspections at abattoirs slaughtering horses for human consumption. In 2007 the last slaughter facility still butchering equines shut its doors to the trade, and a number of states, including Texas and Illinois, outlawed horse slaughter altogether.

As well as welfare concerns, campaigners say they are increasingly alarmed about the potential for US horsemeat contaminated with veterinary drugs -- including phenylbutazone, or bute, an anti-inflammatory medicine -- entering the human food chain.

Bute, among other substances, is banned for use in farm animals across Europe as it is a known carcinogen in humans. But the drug is routinely administered to racehorses (and other equines) in the US and it's feared some of these horses could be finding their way to Mexican and Canadian slaughter facilities, and thus into horsemeat exported overseas.

Testing carried out in Europe recently identified traces of bute in meatballs and burgers containing horsemeat being sold in Portugal. Previously, horsemeat in Switzerland was found to contain bute, and horse carcasses exported from the UK to France tested positive for the substance.

Although it's not clear the horsemeat involved originated in the US (the Swiss horsemeat was traced back to Canada), campaigners say inadequate enforcement and safety loopholes make it "highly likely" contaminated meat is getting through.

Officially, EU regulations passed in 2010 stipulate that only meat from horses with complete medicine treatment records can be exported to Europe. But horse dealers presenting animals at the Mexican and Canadian borders are simply required to fill in paperwork confirming horses have not been administered drugs that would exclude them from being slaughtered for human consumption -- a process ripe for abuse, say campaigners.

The nature of the horse trade, with buyers trawling auctions and purchasing horses whose veterinary backgrounds are unknown, renders the system useless. "US horses fall at the first step... as they do not have that lifetime treatment record," says HSUS's Jacobson.

She points out that the EU's own Food and Veterinary Office audit of US-Mexican horse trade mechanisms in 2012 found substantial problems: "[...] the system in place as regards the sworn statements by the [horse] owners on medical treatments, as well as the deficiencies noted as regards the identification of live horses... can presently not provide standards equivalent to those laid down in EU legislation," the audit noted.

Academics too had earlier warned that procedures appeared insufficient. A 2010 paper jointly authored by Nick Dodman, of the Cummings School of Veterinary Medicine, Tufts University, reported: "Veterinary records from American horses sent to slaughter for human consumption are not available to the public. Moreover, horses are not raised as food animals in the United States and there appears to be inadequate testing to ensure that horses given banned substances such as PBZ [bute] do not enter the slaughter pipeline."

EU officials maintain current procedures for policing the import of US horsemeat are sufficient, but say there are flaws in Mexican and Canadian mechanisms.

"There are acknowledged problems in relation to these imports which need to be addressed by the authorities in Mexico and Canada from where imports, including of meat from horses of US origin, is sourced," says Frédéric Vincent, spokesman for the EU Health and Consumer Policy Commissioner Tonio Borg. "The EU has demanded corrective measures and will decide on the basis of the response to these demands and the test results on imports if any further restrictions are necessary."

Experts from the Federation of Veterinarians of Europe have called for an immediate investigation into how bute entered the supply chain. And the revelations that bute has been turning up in products containing horsemeat across Europe has intensified scrutiny of the continents' own internal trade in live horses. Some 65,000 animals are thought to be trucked between European nations each year to supply meat regarded as a delicacy in Italy, France, Belgium and elsewhere.

As in the US, conditions are regularly criticized by campaigners who say that, despite regulations stipulating minimum welfare standards, breaches are commonplace and enforcement programs unacceptably weak. Critics also claim this live transport increases the risk of spreading equine diseases -- research by the group World Horse Welfare discovered that over 90 percent of horses found in a single shipment showed signs of disease.

"Having been involved in investigating the trade of live horses between central and Eastern Europe and Italy, to me the fact that horsemeat is now being found in other products in the food chain is certainly a scandal but not a surprise," one experienced undercover investigator involved in tracking the trade says.

"The horses I saw were generally animals that were at the end of their working lives, bought at rock-bottom price from families in Romania by middlemen who then sold them on for a profit to the livestock transport operators based there. The aim was to ensure a full lorry load was available to be transported, whatever the condition of the animals, so overheads were kept as profitable as possible."

The investigator says those running the trade "operate on the periphery, with animals bought for transport kept in barren holding facilities, deliberately away from the public eye" in order to avoid inspections.

In the UK, a minor player in the horsemeat trade (like Americans, the British don't think much of horsemeat), questions are now being asked about conditions at its own small number of abattoirs slaughtering equines. Undercover filming by a television news team recently revealed animals being beaten and neglected, and a number of illegal procedures being carried out, at a plant killing horses destined for European food markets.

A version of this story first appeared in Alternet magazine.

Andrew Wasley is a UK-based investigative journalist specialising in food and the environment. He was editor of The Ecologist between 2010 and 2012, is co-director of the Ecologist Film Unit and a founder of the ethical research agency Ecostorm. He regularly reports for Link TV's Earth Focus programme.