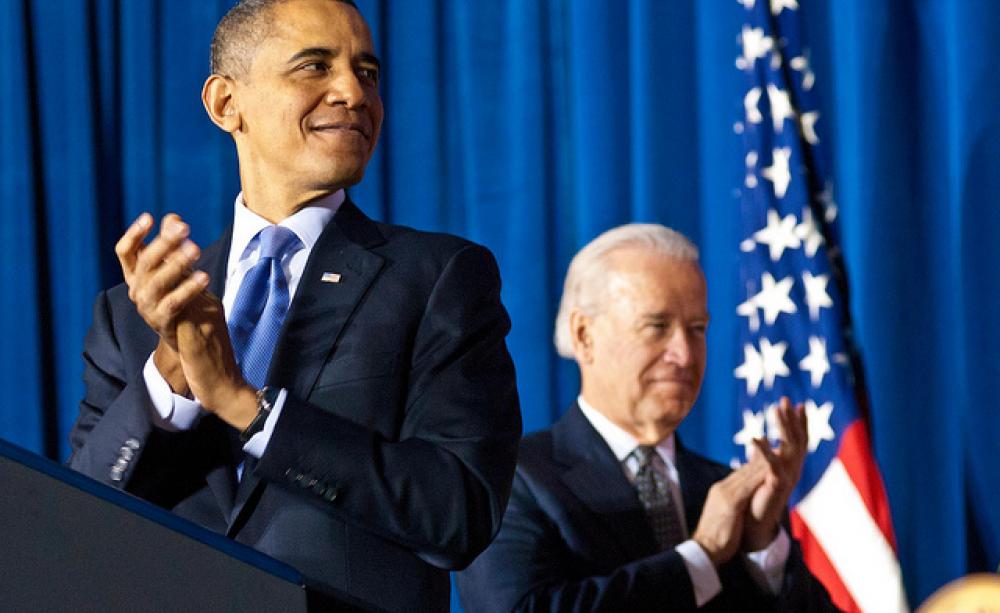 Imagine where you'd be today if you were able to tell Russia: Keep your gas. It would be a very different world you'd be facing today.

A key part of the package involves promoting the deployment of hydraulic fracturing ('fracking') in Ukraine. Dean Neu, professor of accounting at York University in Toronto, describes this phenomenon in his book Doing Missionary Work.

And in this case, it involves the US acting as a modern-day missionary to spread the gospel of fracking to further its own interests.

With the ongoing Russian occupation of Crimea serving as the backdrop for the trip, Biden made Vladimir Putin's Russia and its dominance of the global gas market one of the centerpieces of a key speech he gave while in Kiev.

"And as you attempt to pursue energy security, there's no reason why you cannot be energy secure. I mean there isn't. It will take time. It takes some difficult decisions, but it's collectively within your power and the power of Europe and the United States", Biden said.

"And we stand ready to assist you in reaching that. Imagine where you'd be today if you were able to tell Russia: Keep your gas. It would be a very different world you'd be facing today."

Fracking as a weapon - targetted at Russia

The US oil and gas industry has long lobbied to 'weaponize' its fracking prowess to fend off Russian global gas market dominance. It's done so primarily in two ways.

One way: by transforming the US State Department into a global promoter of fracking via its Unconventional Gas Technical Engagement Program (formerly the Global Shale Gas Initiative), which is a key, albeit less talked about, part of President Obama's "Climate Action Plan."

The other way: by exporting US fracked gas to the global market, namely EU countries currently heavily dependent on Russia's gas spigot.

Imagine where you'd be today if you were able to tell Russia: Keep your gas. It would be a very different world you'd be facing today.

In this sense, the crisis in Ukraine - as Naomi Klein pointed out in a recent article - has merely served as a 'shock doctrine' excuse to push through plans that were already long in the making. In other words, it's 'old wine in a new bottle'.

Within the energy security section of the aid package, the White House promises in "the coming weeks, expert teams from several US government agencies will travel to the region to help Ukraine meet immediate and longer term energy needs."

That section contains three main things the US will do to ensure US oil and gas companies continue to profit during this geopolitical stand-off.

Ironically, as the US government teams up with the European Bank for Reconstruction and Development to teach Ukraine fracking in order to wean the country off of Russian gas, US-based 'private empire' ExxonMobil is doing the same work in Russia to help the country tap into its shale oil and gas bounty.

Among its myriad partnerships with the Russian oil and gas industry, ExxonMobil has signed a joint venture in December 2013 with state-owned company Rosneft to help it tap the massive Bazhenov Shale basin.

"The JV will implement a pilot work program in order to assess and determine the technical possibility of developing the ... Bazhenov formation ... in Western Siberia", reads a Rosneft press release. "The plan is to perform the pilot work program within 2013-2015 timeframe."

Forbes has reported the Bazhenov is roughly 80 times the size of the Bakken Shale, already the biggest field by a long shot in the US and one visible from outer space.

Traditionally, missionaries do charity work in service to humanity. But the enormous climate impact of fracking - given the climate change math - calls those doing the Lord's work in the shale gas sphere into question.

So in the case of the US government and Ukraine, the concept of missionary work has been flipped on its head.

That is, the most profitable companies on the face of the planet - both in the US and in Russia - are set to profit at the expense of everyone else, including the stability of earth's climate system.

Steve Horn is a Research Fellow for DeSmogBlog and a freelance investigative journalist.

This article was originally published by DeSmogBlog under the title 'Vice President Joe Biden Promotes U.S. as Fracking Missionary Force On Ukraine Trip'.