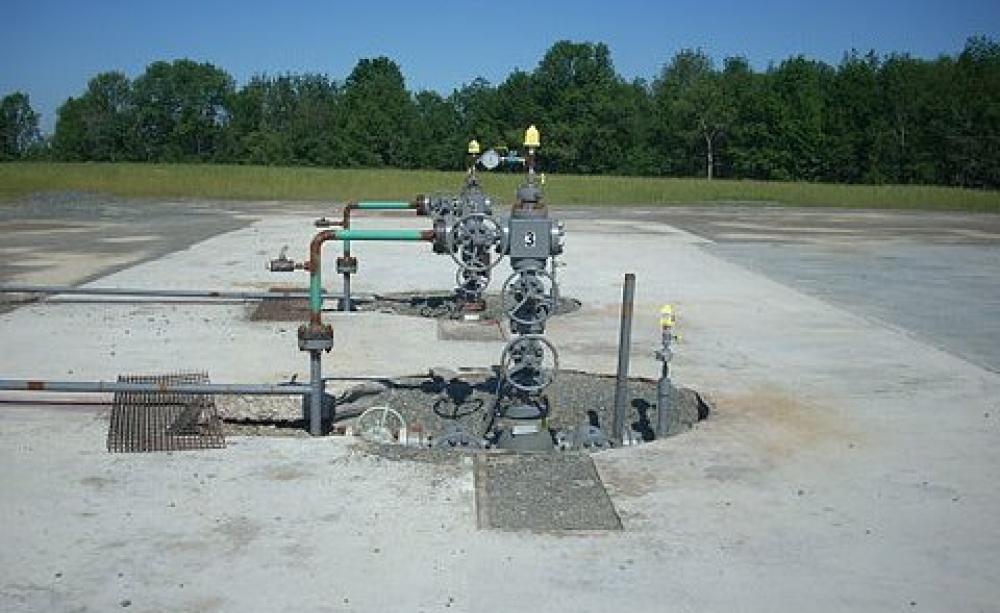 Deep concerns: gas wells at a fracking site in the US state of Pennsylvania. Photo: Gerry Dincher via Wikimedia Commons.
Scientists in the US have established that chemicals used in fracking to extract gas and oil could represent health and environmental hazards, writes Tim Radford. Among the greatest hazards: biocides and corrosion inhibitors.

A number of chemicals, like corrosion inhibitors and biocides in particular, are being used in reasonably high concentrations that could potentially have adverse effects.

Fracking is once again in trouble. Scientists have found that what gets pumped into hydrocarbon-rich rock as part of the hydraulic fracture technique to release gas and oil trapped in underground reservoirs may not be entirely healthy.

Environmental engineer William Stringfellow and colleagues at Lawrence Berkeley National Laboratory and the University of the Pacific told the American Chemical Society meeting in San Francisco that they scoured databases and reports to compile a list of the chemicals commonly used in fracking.

Such additives, which are necessary for the extraction process, include:

Some of these compounds - for example, common salt, acetic acid and sodium carbonate - are routinely used in households worldwide.

But the researchers assembled a list of 190 of them, and considered their properties. For around one-third of them, there was very little data about health risks, and eight of them were toxic to mammals.

Fracking is a highly controversial technique, and has not been handed a clean bill of health by the scientific societies.

Industry operators have countered that their techniques are safe, and involve innocent compounds frequently used, for instance, in making processed food and even ice-cream.

But the precise cocktail of chemicals used by each operator is often an industrial secret, and the North Carolina legislature even considered a bill that would make it a felony to disclose details of the fracking fluid mixtures.

So the Lawrence Berkeley team began their research in the hope of settling some aspects of the dispute.

Dr Stringfellow explained: "The industrial side was saying, 'We're just using food additives, basically making ice-cream here.' On the other side, there's talk about the injection of thousands of toxic chemicals. As scientists, we looked at the debate and asked, 'What's the real story?'"

The story that unfolded was that there could be some substance to claims from both the industry and the environmentalists. But there were also caveats.

Eight substances were identified as toxins. And even innocent chemicals could represent a real hazard to the water supply.

"You can't take a truckload of ice-cream and dump it down a storm drain", Dr Stringfellow said. "Even ice-cream manufacturers have to treat dairy wastes, which are natural and biodegradable. They must break them down, rather than releasing them directly into the environment.

"There are a number of chemicals, like corrosion inhibitors and biocides in particular, that are being used in reasonably high concentrations that could potentially have adverse effects. Biocides, for example, are designed to kill bacteria - it's not a benign material."