How GM food is finding its way into your diet 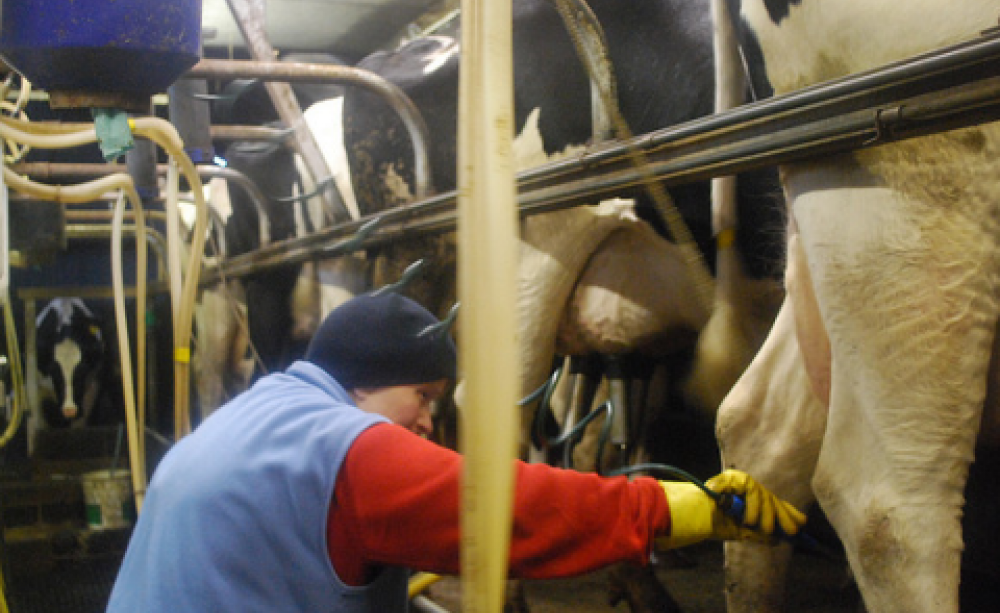 Milking parlour, UK. Photo: sarahluv via Flickr.com.
Genetically modified food is flooding into the UK through the back door. Few consumers know that the meat and dairy products they eat may have been made from animals fed a diet containing GM crops.

Trying to source it on the scale needed is very difficult. The feed companies own the boats, the mills, they control the supply chain.

Campaigners are so alarmed at the influx of GM animal feeds into the UK that they are now calling for a mandatory labelling scheme to force manufacturers and retailers to identify products made from livestock fed on a GM diet.

Unknown to many, about 30 million tonnes of GM animal feed is thought to be imported into Europe each year to feed pigs, poultry, dairy and beef cattle, as well as farmed fish.

Much of the soya and maize used is grown in South America, including Brazil, Argentina and Paraguay, where cultivation has been linked to serious environmental and human rights abuses.

In the UK, foods containing GM material for human consumption are currently required by law to be labelled. However, human foods derived from GM fed animals - meat, fish, milk and dairy products - do not need to be labelled.

This represents a worrying loophole which means consumers could inadvertently be eating be GM products.

"It is a scandal that UK supermarkets refuse to give this information to their customers, and instead deliberately keep them in the dark, with, at best, information on their websites and confusing answers to people who call their helplines.

"We know that people want accurate labelling, and at the moment supermarkets are betraying their customers on this issue."

The Soil Association cites a previous Food Standards Agency-published poll which found 67% of the public thought it was important for products made from animals fed GM diets to be labelled.

Europe - the UK is being left behind

In France, retail giant Carrefour in 2010 launched a labelling scheme to inform customers that animals used to produce foodstuffs have not been fed genetically-modified feed.

More than 300 products now come with a 'free from GM feed' label after the supermarket said polls had found that more than 60% of customers would stop buying products if they knew they were made from animals given GM feed.

Trying to source it on the scale needed is very difficult. The feed companies own the boats, the mills, they control the supply chain.

Similar schemes are being adopted by other major European food retailers.

In Britain, tensions over the issue intensified last year following an announcement by four British supermarkets - Tesco, Sainsburys, the Co-op and Marks and Spencer.

In it they said they could no longer guarantee that the feed used in their poultry lines would be non-GM, citing their suppliers' apparently increasing difficulties in sourcing non-GM feed.

Waitrose is perhaps further ahead than other retailers, but it too has been unable to secure GM free feeds for livestock, other than poultry and NZ lamb and UK farmed trout and salmon.

"Along with all other supermarkets, our other conventional livestock will have some GM soy in their feed, but for ruminants it will only be an element, as under Waitrose production standards we always insist that our cattle are grazed on pasture when available. Our pigs will have more soy and cereal in their diets.

"We're currently working on securing new non GM soy supply routes going forward and researching home grown protein sources to give our farmers a broader range of options for their feed regimes across all livestock, reducing the need for GM soy."

British farmers are also facing an worrying dilemma - accept GM feed or go organic - according to industry sources, who agree that conventional feed is increasingly becoming difficult to source at an economically viable price.

An ample supply, say producers, but where is it?

The availability of non GM feed is disputed. Producers organisations in Brazil maintain there is an ample supply of conventionally grown soya, but that poor infrastructure at ports has held some shipments up.

Yet some major feed supply companies are now only offering their customers GM options, or organic.

"It's a nightmare trying to source non GM feed", one supermarket source admitted. "The reality is that trying to source it on the scale needed [by large retailers] is very difficult. The feed companies own the boats, the mills, they control the supply chain."

One animal feed merchant told me that GM is now effectively being forced onto farmers: "As a farmer you are constantly under pressure, you are busy, you've got to be good at finance, a good production manager, so when someone offers [GM] feed that's cheaper, it's easy to say yes."

"Not having an option is not good. But when you've got an importer saying GM is fine and that he's not going to bring in [non GM] a farmer is not likely to go out and source his own."

The merchant said that not all farmers were aware about GM ingredients, and admitted some were not concerned anyway. He said some believed they were the victims of double standards:

" 'Why can we import GM from the USA or wherever, but are not allowed to grow it here', they say."

A Welsh organic dairy farmer I interviewed agreed opinions are split: "I've got farming neighbours who are conventional; some are accepting GM with open arms, some don't want it. One milk supplier is not happy at all about GM feed", he says.

Michael Hart, a beef and lamb farmer from Cornwall, and the founder of the Small and Family Farms Alliance, said that he believes there is still demand for non GM feed but that it is becoming prohibitively expensive:

"My local feed merchant says he can get organic, but for conventional non GM he'll demand more money."

GM concerns have not gone away

Hart, a prominent anti-GM campaigner, says that since the BSE crisis farmers have become more sceptical about science and about what they are told, and that many have concerns about GM:

"Since 1996 farmers are more market aware and [more aware] of public opinion towards what we do. Is this GM stuff safe to feed my cows? Why do the public say they don't want it? Trust of science, trust of big business has gone."

With the Horsegate scandal still fresh in the public memory, consumers will be rightly worried about this latest attempt to allow GM food to slip in unannounced and without permission - particularly as major questions remain over its safety, for  both for farm animals and people.

Andrew Wasley's book, The Ecologist Guide to Food, is out now, published by Leaping Hare.