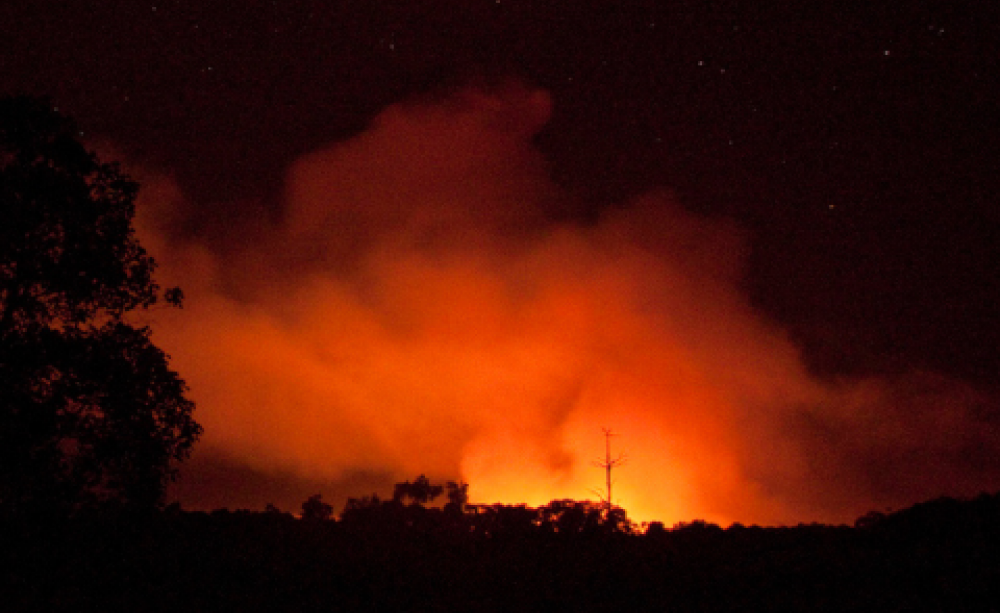 The Tripa Forest burning at night, cleared for palm oil. Photo: Carlos Quiles / RAN - ran.org/tripa-expose - via Flickr.com.
An Indonesian palm oil company has been convicted of large-scale burning of protected swamp forest in Aceh - home to some of Sumatra's last orangutans.

This is a clear message to companies working in Aceh who think they can destroy protected forests.

PT Kallista Alam has been found guilty of large-scale illegal clearance and burning of protected 'swamp forest' and peatland within the world-recognised Leuser Ecosystem of Sumatra island - where orangutans, tigers, elephants, forest rhinos co-exist in the wild.

The conviction in the case brought by the Indonesian Ministry of Environment has landed the company a $9.5 million fine and an order to contribute $21 million to restore the cleared areas of the Tripa forest. Some 5,770 hectares of land managed by the company will also be confiscated.

Muhammad Nur, chairman of the Aceh branch of the nonprofit group Walhi (Friends of the Earth Indonesia) commented: "This is a clear message to companies working in Aceh who think they can destroy protected forests and get away with it."

"Each company faces the possibility of serious financial consequences as a result of their illegal clearance, burning, and drainage of Tripa's unique peat swamp ecosystem", said Nur.

"Some of the company directors and members of senior management also risk prison terms in cases against them for their actions on the ground."

Ian Singleton, director of the Sumatran Orangutan Conservation Programme, said the high level of interest in the Tripa Forest and the Leuser Ecosystem worldwide demonstrates the growing concern wordwide about Indonesia's swamp forests and their "globally important biodiversity."

Aceh contains Sumatra's last large area of rainforest following extensive deforestation elsewhere on the island. Its Tripa Forest is one of the last parts of Sumatra to support a substantial number of orangutans, of which only 6,500 remain on the island. The forest is also home to many other endangered species.

PT Kallista Alam is to file an appeal against the verdict. It denies violating any environmental laws, claims to have caused no environmental destruction or pollution, and describes the allegations against it as obscure, unclear, and unsupported by evidence.

Any burning carried out in Tripa forest was in accordance with regulations, the company insists.