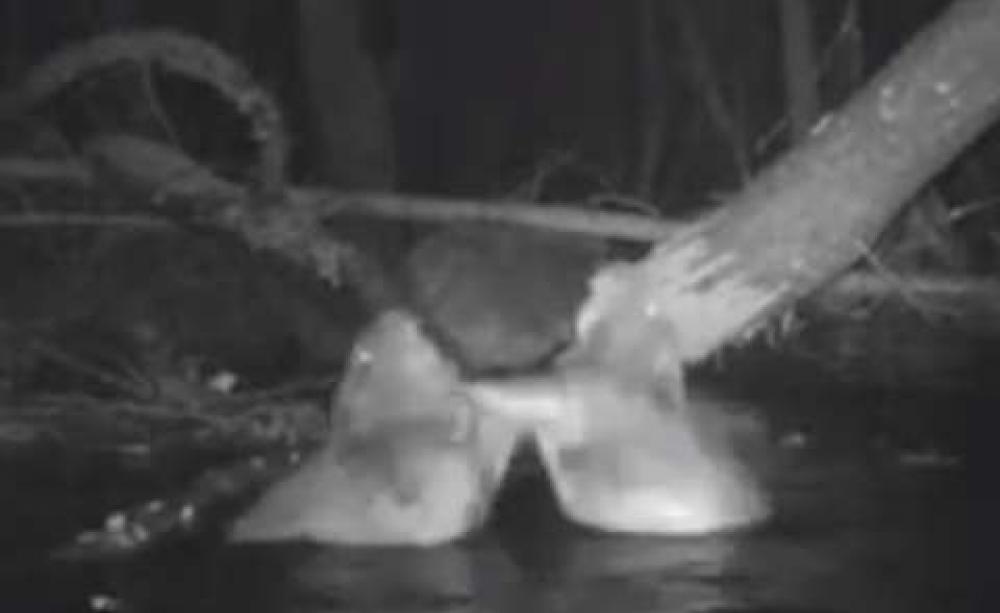 Wild beavers caught on film in the River Otter, Devon, by Tom Buckley. Photo via BBC News and Youtube.
A family of wild of beavers has established on an English river for the first time since Henry VIII. But now the Government has decided to trap them and consign them to captivity in a zoo or wildlife centre. Defenders of wilderness are now demanding: keep our wild beavers free!

This beaver family has been around for at least a couple of years and no one seems to have noticed them. They haven't caused any trouble for anybody.

"We intend to recapture and rehome the wild beavers in Devon and are currently working out plans for the best way to do so. All decisions will be made with the welfare of the beavers in mind."

So said George Eustice, a minister in the Department for Environment, Food and Rural Affairs (Defra), in a written Parliamentary answer.

As one of the ministers supporting the culling of badgers, we may at least be grateful that he added: "There are no plans to cull beavers."

But why the enthusiasm to trap the beavers, the first truly wild population of the animals to live in England since they were wiped out some 500 years ago, hunted to extinction for their fur, meat and scent gland, prized for its medicinal properties?

Britain's first wild beavers since the reign of Henry VIII

The beavers were discovered earlier this year by a local naturalist, Tom Buckley who spotted tell-tale signs that riparian trees along a stretch of the River Otter had been felled and vegetation had been gnawed away. On closer examination he found beaver footprints in the mud.

Together with the landowner, David Lawrence, Buckley rigged up three infra-red cameras with motion detectors along a few hundred yards of riverbank, near Ottery St Mary - and waited.

Before long he had some captivating footage of a family of beavers feeding and playing by the river - a mother, father and child. And as he told The Guardian, they were doing absolutely no harm to anyone.

"This beaver family has been around for at least a couple of years and no one seems to have noticed them. They haven't caused any trouble for anybody and it's only because they've been caught on camera that people know they are here.

"To think about destroying them is totally out of order. This is an insight into what the potential impact is if they are already in a place and at the moment that impact would seem to be zero."

They don't eat fish, you know

OK, so the Government is no longer planning to destroy them. But it is determined to pack them off to a zoo or wildlife park. As a Defra spokesman said:

"We intend to recapture, and rehome these beavers and are currently working out plans for the best way to do so. Depending on the source of the animals, they could be carrying a disease not currently present in the UK.

"In addition, beavers have not been an established part of our wildlife for the last 500 years. Our landscape and habitats have changed since then and we need to assess the impact they could have."

But it's an open secret that the main reason for Defra's plan is that anglers have been demanding their removal - possibly under the impression that beavers eat fish.

Well, anglers, here's something you should know. Beavers are vegetarian, and their diet is limited to tree bark, twigs and wetland vegetation. Far from eating fish, their presence is revitalising to riverine ecosystems and enhances the quality of the environment.

And as they their build dams - not that this particular family of beavers has bothered to do any such thing - they create ponds along rivers and streams that expand and enrich freshwater fish habitats, and improve water quality by trapping silt and organic matter.

And after the devastating floods that hit the Southwest last winter, beavers have much to offer as their dams help to hold back the flow of water into flood-prone lowlands, and help infiltration into groundwater aquifers.

Of course the Angling Trust knows perfectly well that beavers don't eat fish, so they come up with other objections, as they uphold the "right" of their members to shoot beavers on sight.

"Anglers are particularly worried because beavers create dams across streams and rivers which can prevent coarse and game fish migrating up and downstream to complete their lifecycles", the Trust states.

But if you stop and think about it, England's rivers were in considerably better shape and better stocked with fish hundreds of years ago when beavers were ubiquitous in our rivers and lakes, than now. Those were the days when millions of salmon and eels migrated up our rivers every year.

"Many fish stocks in the UK are already suffering as a result of agricultural and sewage pollution, over-abstraction, weirs and dams and other habitat damage, invasive non-native species, poaching and predation", the Trust continues.

Well that's all true enough - but none of it has nothing whatsoever to do with beavers, which have happily co-evolved with our wild fish over millennia. But the Trust fulminates on, now referring to the introduction of beavers in Scotland,

"A series of blunders has led us to a situation where beavers might spread throughout the country, damming rivers, blocking access to spawning areas, felling trees and infecting other wildlife and people with lethal tapeworms. We urge the Westminster government to take decisive action urgently ... "

It's all enough to make nature blogger Miles King wonder, "how did the fish manage for the previous 200,000 years of Eurasian Beaver existence, or indeed their evolutionary precursors?" But he does detect a certain irony in the Anglers Trust warnings:

"I find it hilarious that Anglers, of all people, using the 'unapproved introductions are wrong' argument against an extinct native species, when they have been responsible for repeated and continuing introductions of native and non-native species of fish to the UK’s waterways and waterbodies.

"Where did the Zanders, the Mirror Carp, the Wels and all the other exotic fish, with their exotic diseases come from?"

The Devonshire locals are equally unimpressed by the anglers' apocalyptic visions. According to District councillor Clair Wright the animals have been "universally welcomed" in the area.

And David Lawrence, on whose land the beavers built their lodge, is a firm beaver supporter, and publicly warned Defra off any attempt to kill off the beavers. As he told the Exeter Press & Echo with a notable lack of hysteria,

"We might have to go in one day and clear some of the felled trees so they won't be a nuisance downstream in Tipton if it floods. But it’s all very interesting - my wife has just started a holiday business with a safari tent and this will give people something extra to look at."

Give the beavers a long term future on the river

The Devon Wildlife Trust is - entirely separately - running its own beaver project at an undiscosed location in the County, where a family group is being studied behind the confines of secure fencing.

It does not support immediate introduction of beavers pending further research, yet its position on the River Otter family is clear:

"Beavers should remain in the river Otter unless the beavers are proven to have infectious disease, or the local community decides that they are not supportive of the beavers presence, or there is not an independent body with sufficient resource and capacity to monitor and manage the beaver population."

"We are currently communicating with Defra and have requested a meeting with appropriate ministers to discuss options for ensuring the beavers have a long term future on the river."

Devon-based wildlife consultant Derek Gow, a long-standing campaigner for beavers to be returned to the wild, agrees: "What Defra should do is look at a more informative project where by the beavers are left and studied - it becomes an English beaver trial."

"At the moment they are ringing all the zoos and asking them if they will take the beavers", he told the Exeter Press & Echo. "This will be the first time in history that we have exterminated a native mammal twice, setting an extraordinary historical precedent."

A visceral hatred of nature?

We all know how willing politicians can be to cave into commercial and recreational interests, and that Britain's 'Greenest Government ever' has turned out to be almost uniquely abysmal on a wide spread of environment issues. But could there be something else at work?

My own suspicion is that there lurks, in the hearts of Environment Secretary Owen Paterson and his political and landowning friends and colleagues, a deep and visceral fear of wilderness - and a sense that nature must be shot, killed, exterminated, controlled and subjected to the authority of the landowner and the state.

Fish are there to be caught, foxes to be hunted, pheasants and partridges to be shot, badgers to be culled, and any remaining shreds of wilderness in our over-developed land should be grazed to extinction, sprayed with herbicide, ploughed up for GM crops, or concreted over with roads, airports, shopping centres and housing estates.

And the unscheduled appearance of a family of wild-living beavers, returning to our green and pleasant land for the first time since the 16th century, is an intolerable affront to that world view.

Public opinion has already prevented the Government from killing the River Otter beavers - something it desperately sought to justify by citing the fictitious danger that they would be infected with the tapeworm Echinococcus Multilocularis, and cause an epidemic among humans and wildlife.

But now a new outcry is needed to tell the Government: let the River Otter beavers be!

Petition (38 Degrees): Save the free beavers of England.

Petition (Change.org):  Leave the beavers on the river Otter alone. Do not cull , remove or disturb them in any way.