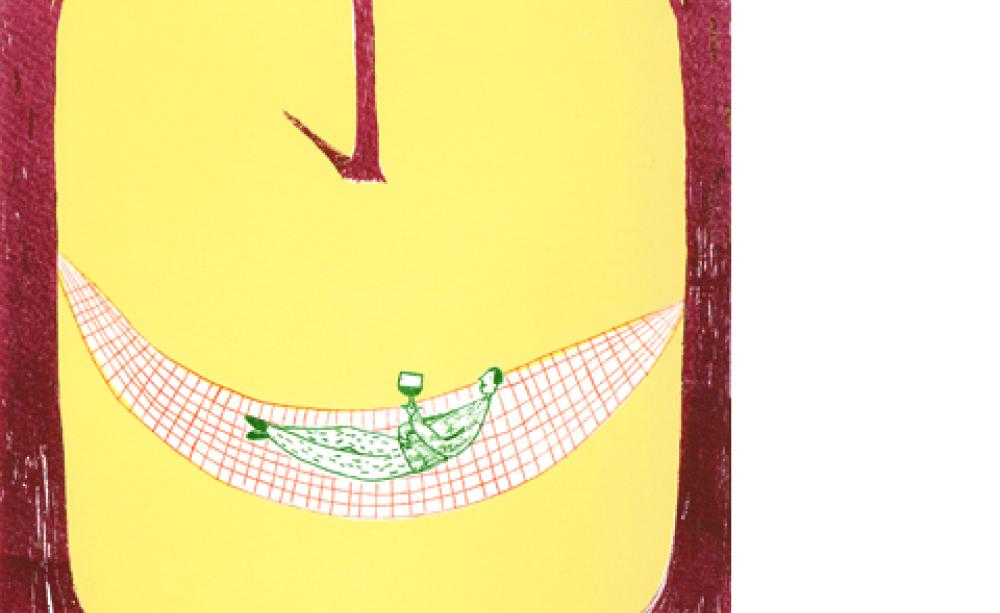 Leisure in the ancient world did not mean time off, but was an activity in it's own right. Illustration: Happiness by Harriet Russell www.harrietrussell.co.uk
To be without leisure and do everything for the sake of something else, is to be only half alive, writes Edward Skidelsky.

Conventional wisdom holds that we must work more. The unemployed should be employed. People in part-time jobs should be in full-time jobs. And even those in full-time employment should work harder in order to keep pace with the industrious Indians and Chinese.

I think this is topsy-turvy. The great mystery of our time is not that we don’t work harder: it’s that we continue to work as hard as we do. When I say ‘we’, I refer, of course, to the working population. There are many people in our society – the unemployed and partially employed – who would dearly like to work more. But there are equally many people who would dearly like to work less. This is a deeply irrational state of affairs.

The obvious solution is for all adults to work, but to work shorter hours. It is only our devotion to the principle of the 40-hour week that condemns a large (and growing) sector of the population to the grim fate of unemployment.

Wealthy, but not joyful
We belong, let us recall, to one of the wealthiest societies that has ever existed in human history. Yet we have failed to realise the chief benefit of wealth: leisure. This should surprise us more than it does. In the past it was generally assumed that as people became richer they would work less.

The great economist John Maynard Keynes shared this assumption. In his essay of 1929, entitled Economic Possibilities for our Grandchildren, he predicted that standards of living in the affluent world would rise between four and eight times over the following 100 years, leading to a decline of working time to 15 hours a week, or just 3 hours a day. Liberated from the burden of toil, ordinary people would be able to share in the spontaneous, joyful kind of existence once the privilege of the lucky few.

“I see us free”, Keynes wrote, “to return to some of the most sure and certain principles of religion and traditional virtue – that avarice is a vice, that the exaction of usury is a misdemeanour and the love of money is detestable, that those walk most truly in the paths of virtue and sane wisdom who take least thought for the morrow. We shall once more value ends above means and prefer the good to the useful. We shall honour those who can teach us how to pluck the hour and the day virtuously and well, the delightful people who are capable of taking direct enjoyment in things, the lilies of the field who toil not, neither do they spin.”

Still working 40 hours a week. Why?
Well, it hasn’t happened like that. Keynes got one thing right though: standards of living in the affluent world have indeed risen about fourfold. But hours of work have not fallen anything like as much. Today in Britain we work on average about 40 hours a week (down from 50 hours in 1930), but nowhere near the 15 hours Keynes foresaw. Why?

My father Robert and I wrote a book last year called How Much is Enough? in which we tried to solve this “Keynes problem”. We considered various explanations: the inequalities of power in the labour market, the increasingly uneven distribution of wealth and incomes, and the power of advertising to kindle dormant passions of envy and vanity.

But according to some of our reviewers, we overlooked the obvious explanation for the failure of Keynes’ prophesy. Human beings, they said, want to work long hours, because they are frightened or nauseated by the prospect of endless leisure.

Here is Alasdair Palmer, writing in The Telegraph: “The Skidelskys have nothing substantial to say about boredom – and it is why their analysis is doomed from the start. The reason why most people keep striving long after they have satisfied all elementary needs is not, as the Skidelskys claim, that they mistakenly think that money is the ultimate value. It is simply that striving for it keeps boredom at bay… Boredom is the serpent in the Skidelskys’ garden of idle delights – and you can be sure that, were we ever to achieve it, that serpent would soon eject us from it.”

Modern day leisure is too much like work
Now I don’t deny that many of us would be bored by a life of leisure, and carry on working primarily in order to avoid that prospect. But that is only because we do not know what leisure really is, or might become. We talk, revealingly, of ‘taking a break’ over the weekend or over summer.

Leisure for us, in other words, is a mere interlude in the productive process, a moment to unwind or recharge before the next bout of work. Indeed, a good deal of modern leisure is indistinguishable from work. We play squash in order to stay fit, party in order to network, invest quality time in our children in order to keep them sweet. No wonder a life of leisure fills us with dread!

How can we recover genuine leisure? A first step would be to recall the original meaning of the term. Leisure in the ancient world – schole in Greek, otium in Latin – was not just time off work, but a distinct form of activity in its own right. It was what was done freely, for its own sake, rather than for the sake of something else. Leisure was a privilege of landed gentlemen. Slaves proverbially lacked it, as to a lesser degree did paid labourers, whose waking hours were devoted to servicing the needs of others.

Athenians called work of this sort ‘banausic’ or ‘mechanical’, words suggestive of servility and stultification. “We call those arts mechanical which tend to deform the body,” wrote Aristotle, “and likewise all paid employments, for they absorb and degrade the mind.”

True leisure vs recreation
The Greeks were well aware that slaves and workmen had to rest, perhaps even ‘unwind’ occasionally, but for them that was something altogether distinct from leisure. ‘Recreation’, as we might now call it, was simply the flipside of work, a necessary respite from its pain and constraint. Leisure in the true sense had nothing restorative about it. It took place beyond the work/recreation cycle; it was human activity unleashed from any external purpose.

Leisure could thus be strenuous in the highest degree – far more strenuous than work – without losing its leisure character. The modern identification of leisure with recreation, as embodied in the ‘leisure centre’, simply shows how far the concept has strayed from its original and deeper meaning.

Leisure in the ancient world took many forms. For most Athenians, it was synonymous with athletics and oratory, the conventional occupations of the propertied elite. But for a dissident minority, leisure meant philosophia, love of wisdom – an activity quite unlike the academic discipline that now bears its name. Philosophia was free, open-ended speculation, unconstrained by dogma or money.

Plato contrasted it with litigation, in which the goal is to win one’s case, and win it quickly. (“Law is philosophy on a stopwatch,” said a friend of mine who had recently switched from one occupation to the other.) For Aristotle, philosophy was a celestial activity, the closest we come to the contemplative bliss of the gods.

Not just a Western ideal
Leisure is not just a Western ideal: it crops up wherever a minority is freed from the necessity of earning a living. The Chinese cultivated the arts of leisure with a whimsy absent from the more strenuous Greco-Roman version. Here is Shen Fu, a failed scholar of the early 19th century, reminiscing about happier times: “We would spend the whole day doing nothing but criticising poetry and talking about painting. My friends were like swallows on the rafters, coming and going as they pleased. Yün even sold her hairpins to buy wine without a second thought, because we did not want to give up lightly such a beautiful time and place. But now we are all parted like clouds blown by the wind. The jade is broken, the incense buried! I cannot bear to look back.”

These visions of leisure, Western and Eastern, are in many ways repugnant to us. Aristotle’s gentleman philosophers would have lived on the labour of slaves – “human tools”, as he charmingly calls them – while Shen Fu, a local government secretary, received an income that was almost certainly made up largely of bribes. How can an ideal of life erected upon such murky foundations hold any appeal for us today?

Such a man is perpetually looking forward to a consummation he can never, in the nature of the case, enjoy. As Keynes put it, “he does not love his cat, but his cat’s kittens; nor, in truth, the kittens, but only the kittens’ kittens, and so on forward forever to the end of cat-dom.” He will die before he has ever really lived.

Nor should we be overly troubled by accusations of elitism. True, some can enjoy leisure only if others dig the coal and wash the dishes, but in a technological age there is no need for those others to be human beings. Mechanical work can, and should, be done by machines. “Human slavery is wrong, insecure, and demoralising,” wrote Oscar Wilde in his visionary essay The Soul of Man under Socialism. “On mechanical slavery, on the slavery of the machine, the future of the world depends.” We now have machinery sufficient to free the affluent world from drudgery. It is only our failure of political organisation and ethical imagination that holds us back.

Edward Skidelsky is a lecturer in philosophy at Exeter University, and author, together with his father, Robert, of How Much is Enough: Money and the Good Life (Allen Lane).