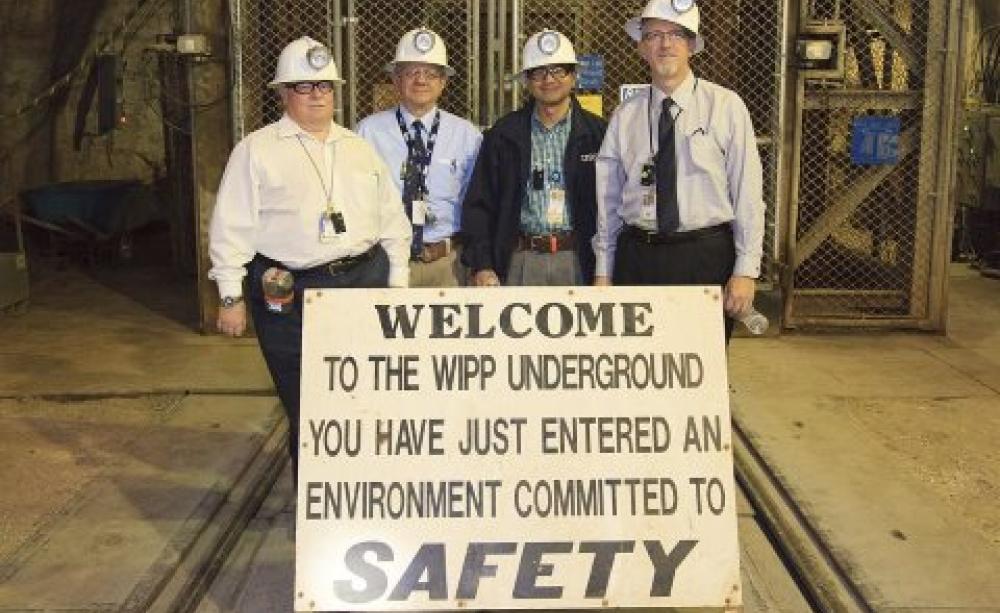 The precise cause of the February 14 accident involving a radioactive waste barrel at the world's only deep geological radioactive waste repository has yet to be determined, but information about the accident continues to come to light.

The Waste Isolation Pilot Plant (WIPP) in New Mexico, USA, is a dump site for long-lived intermediate-level waste from the US nuclear weapons program. More than 171,000 waste containers are stored in salt caverns 2,100 feet (640 meters) underground.

On February 14, a heat-generating chemical reaction - the Department of Energy (DOE) calls it a 'deflagration' rather than an explosion - compromised the integrity of a barrel and spread contaminants through more than 3,000 feet of tunnels, up the exhaust shaft, into the environment, and to an air monitoring approximately 3,000 feet north-west of the exhaust shaft. [1]

'The contractors were not exactly meticulous'

Investigators believe a chemical reaction between nitrate salts and organic 'kitty litter' used as an absorbent generated sufficient heat to melt seals on at least one barrel.

But experiments have failed to reproduce the chemical reaction, and hundreds of drums of similarly packaged nuclear waste are still intact, said DOE spokesperson Lindsey Geisler. "There's still a lot we don't know", she said. [2]

Determining the cause of the accident has been made all the more difficult because the precise composition of the waste in the damaged barrel is unknown. [4,5] A former WIPP official said:

"The DOE sites that sent in the waste got careless in documenting what was being shipped in ... The contractors at the sites packing the waste were not exactly meticulous. When we complained to DOE, it was made clear we were just to keep taking the waste and to shut up." [6]

Operations to enable WIPP to reopen will cost approximately US$242 million (€193m) according to preliminary estimates by the DOE. In addition, a new ventilation system is required which will cost US$65-261 million (€52-208m). [7]

Taking into account indirect costs such as delays with the national nuclear weapons clean-up program, the total cost could approach US$1 billion (€800m). [4] Further costs could be incurred if the State of New Mexico fines DOE for its safety lapses at WIPP. [5]

A 'horrific comedy of errors'

British academic Rebecca Lunn, a professor of engineering geosciences, describes how waste repositories would work in a perfect world. "Geological disposal of nuclear waste involves the construction of a precision-engineered facility deep below the ground into which waste canisters are carefully manoeuvred.

"Before construction of a geological repository can even be considered, an environmental safety case must be developed that proves the facility will be safe over millions of years." [9]

Prof. Lunn's description is far removed from the situation that prevails at WIPP. Robert Alvarez, a former assistant to the energy secretary, said that a safety analysis conducted before WIPP opened predicted accidents such as the February 14 deflagration once every 200,000 years.

The WIPP accident resulted from a "horrific comedy of errors" according to James Conca, a scientific adviser and WIPP expert: "This was the flagship of the Energy Department, the most successful program it had. The ramifications of this are going to be huge." [4]

The problematic role of the National Nuclear Security Administration (NNSA) - a semi-autonomous agency within the DOE - is emphasised in a detailed analysis by investigative journalist Joseph Trento. [6]

An endless repetition of dubious practices

A DOE official quoted by Trento said a root problem is "the fact that DOE has no real operational control over the NNSA. Under the guise of national security, NNSA runs the contractors, covers up accidents and massive cost overruns and can fire any DOE employee who tries to point out a problem.

"Because they control so many jobs and contractors, every administration refuses to take them on."

Trento explains the realpolitik: "The contractor game at NNSA is played this way: Major corporations form LLC's [limited liability companies] and bid for NNSA and DOE contracts. For example, at SRS [Savannah River Site] they bid to clean up waste and get some of the billions of dollars from Obama's first term stimulus money.

"Things go wrong, little gets cleaned up, workers get injured or exposed to radiation and outraged NNSA management cancels the contract. A new LLC is formed by the same NNSA list of corporate partners and they are asked to bid on a new management contract.

"The new LLC hires the same workers as the old management company and the process gets repeated again and again. The same mistakes are made and the process keeps repeating itself.

"These politically connected DOE contractors, responsible for tens of billions of dollars in failed projects and mishandling of the most deadly materials science has created, have been protected by the biggest names in both the Republican and Democratic parties at an enormous cost to the US taxpayers, public health and the environment."

Of immediate relevance to the February 14 WIPP accident are problems at Los Alamos National Laboratory (LANL). The waste barrel involved in the accident was sent from LANL to WIPP. LANL staff approved the switch from an inorganic clay absorbent to an organic material in September 2013.

That switch is believed to be one of the causes of the February 14 accident. LANL also approved the use of a neutraliser that manufacturers warned shouldn't be mixed with certain chemicals. [10]

A September 30 report by the DOE's Office of Inspector General identifies "several major deficiencies in LANL's procedures for the development and approval of waste packaging and remediation techniques that may have contributed" to the February 14 WIPP accident. [11] The report states:

"Of particular concern, not all waste management procedures at LANL were properly vetted through the established procedure revision process nor did they conform to established environmental requirements.

"In particular, we noted that:

The February 14 accident has shone a light on multiple problems at WIPP (discussed in greater detail in Nuclear Monitor #787). [12]

A DOE-appointed Accident Investigation Board released a report into the accident in April. [13] The report identified the "root cause" of the accident to be the many failings of Nuclear Waste Partnership, the contractor that operates the WIPP site, and DOE's Carlsbad Field Office. The report criticized their

"failure to fully understand, characterize, and control the radiological hazard. The cumulative effect of inadequacies in ventilation system design and operability compounded by degradation of key safety management programs and safety culture resulted in the release of radioactive material from the underground to the environment, and the delayed / ineffective recognition and response to the release."

The Accident Investigation Board report states that personnel did not adequately recognize, categorize, or classify the emergency and did not implement adequate protective actions in a timely manner.

It further noted that there is a lack of a questioning attitude at WIPP; a reluctance to bring up and document issues; an acceptance and normalization of degraded equipment and conditions; and a reluctance to report issues to management, indicating a chilled work environment.

Trento said: "The report has a familiar litany and tone: Ignored warnings from the Defense Facilities Board, lack of DOE contractor supervision, and a missing safety culture. There are hundreds of similar reports about the Savannah River Site, LANL, Oak Ridge, Hanford and other DOE national laboratories and sensitive national security sites. The Department of Energy is in serious trouble." [6]

A US Environmental Protection Agency review of air testing at WIPP in February and March found discrepancies in recorded times and dates of sample collections, flawed calculation methods, conflicting data and missing documents.

Compromised response to the accident

A degraded safety culture was responsible for the accident, and the same failings inevitably compromised the response to the accident. Among other problems: [4,6]

Jim Green is editor of Nuclear Monitor and national nuclear campaigner with Friends of the Earth, Australia.

This article was originally published in Nuclear Monitor No. 794, November 2014.

Nuclear Monitor is published 20 times a year. It has been publishing deeply researched, often strongly critical articles on all aspects of the nuclear cycle since 1978. A must-read for all those who work on this issue!