Prosperity without growth: 10 policy proposals for the new left 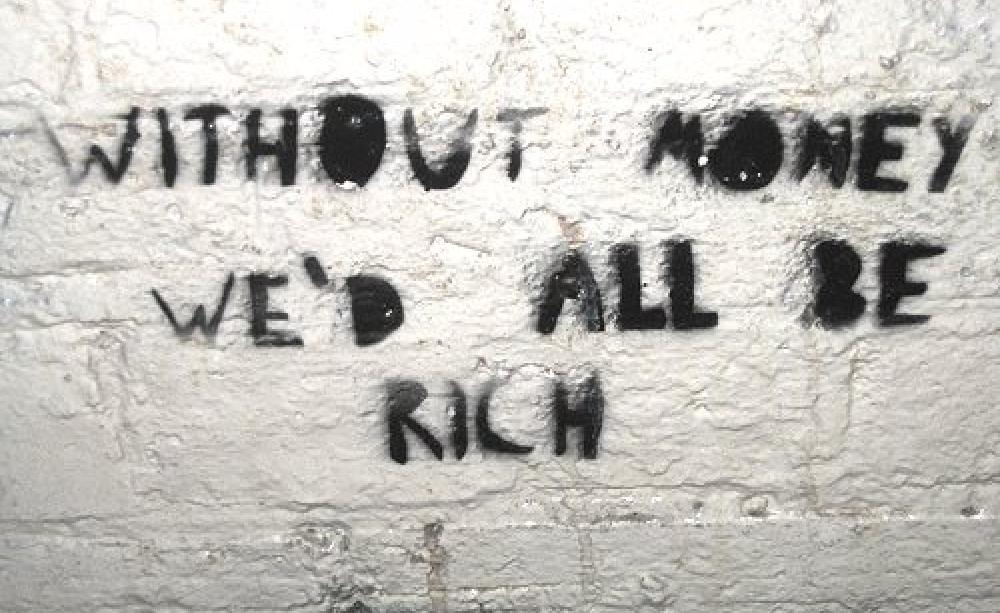 Without money, would we all be rich? Maybe not. But prosperity for all will require us to develop a radically different relationship with money! Photo: Toban B. via Flickr (CC BY-NC 2.0).
Modern economies depend on growth, writes Giorgos Kallis: the moment it stops, we all get poorer, government tax revenues decline and unemployment rises. So is it possible to have prosperity without growth? Yes it is - and here's how ...

In theory, growth is needed to pay off debts, create new jobs, or increase the incomes of the poor. In practice, we have had decades of growth, yet we are still indebted, with our youth unemployed and poverty as high as ever.

In our recent book Degrowth. A vocabulary for a new era we argue that economic growth is not only becoming more and more difficult in advanced economies, but that it is also socially and ecologically unsustainable.

The global climate, the welfare state, or social bonds that have lasted for ages, are all sacrificed in the name of appeasing the god of growth.

In theory, growth is needed to pay off debts, create new jobs, or increase the incomes of the poor. In practice, we have had decades of growth, yet we are still indebted, with our youth unemployed and poverty as high as ever. We were indebted to grow and now we are forced to grow to pay off debts.

Degrowth is a call to decolonize the social imaginary from the ideology of a one-way future consisting only of growth. Degrowth is not the same thing as recession. It is the hypothesis that we can achieve prosperity without economic growth.

In other words: that we can have meaningful work without the need for ever-lasting growth; sustain a functional welfare state without the economy getting bigger every single year; and increase equality and eliminate poverty, without having to accumulate more and more money each year.

A new Left, new in terms of ideas, but also in terms of the young age of its members, is rising in Europe, from Spain and Catalonia, to Greece, Slovenia or Croatia. Will that Left be also 'green' and propose an alternative cooperative model for the economy inspired by the ideas of degrowth?

Or will this new Left, like the new Left of Latin America, driven by the demands of global capitalism, reproduce the expansionary logic of capitalism, only substituting multi-national corporations with national ones, distributing somewhat better the crumbs to the populace?

In what follows we present 10 proposals inspired by degrowth that we wrote for the context of Spain. The context to which these proposals refer to is specific. But with certain amendments and adaptations they are also applicable elsewhere and relevant for radical Left and Green political parties all over Europe.

1. Citizen debt audit. An economy cannot be forced to grow to resolve accumulated debts that have contributed to fictitious growth in the past. It is essential not only to restructure but also to eliminate part of the debt with a people's debt audit, part of a new, really democratic culture.

Such elimination shouldn't be realised at the expense of savers and those with modest pensions whether in Spain or elsewhere. The debt of those that have considerable income and assets should not be pardoned.

Those who lent for speculation should take the losses. Once the debt is reduced, caps on carbon and resources (see 9) will guarantee that this will not be used as an opportunity for more growth and consumption.

2. Work-sharing. Reduce the working week to at least 32 hours and develop programmes that support firms and organisations that want to facilitate job-sharing.  This should be orchestrated such that the loss of salary from working less only affects the 10% highest income bracket.

Complemented by environmental limits and the tax reform proposed below (see 4), it will be more difficult for this liberation of time to be used for material consumption.

3. Basic and maximum income. Establish a minimum income for all of Spain's residents of between €400 and €600 per month, paid without any requirement or stipulation. A recent study suggests this is feasible for Spain, without a major overhaul of the tax system.

Design this policy in conjunction with other tax and work reforms so that they increase the income of the poorer 50% of the population while decreasing that of the top 10%, to finance the change. The maximum income for any person-from work as well as from capital-shouldn't be more than 30 times the basic income (€12,000 - €18,000 monthly).

4. Green tax reform. Implement an accounting system to transform, over time, the tax system, from one based principally on work to one based on the use of energy and resources. Taxation on the lowest incomes could be reduced and compensated for with a carbon tax.

Establish a 90% tax rate on the highest incomes (such rates were common in the USA in the 1950s). High income and capital taxes will halt positional consumption and eliminate the incentives for excessive earnings, which feed financial speculation.

Tackle capital wealth through inheritance tax and high taxes on property that is not meant for use, for example on the second or third houses of individuals or on large estates.

5. Stop subsidizing and investing on activities that are highly polluting, moving the liberated public funds towards clean production. Reduce to zero the public investment and subsidy for private transport infrastructure (such as new roads and airport expansion), military technology, fossil fuels or mining projects.

Use the funds saved to invest in the improvement of public rural and urban space-such as squares, traffic free pedestrian streets-and to subsidise public transport and cycle hire schemes.

Support the development of small scale decentralised renewable energy under local and democratic control, instead of concentrated and extensive macro-structures under the control of private business.

6. Support the alternative, solidarity society. Support, with subsidies, tax exemptions and legislation, the not-for-profit co-operative economic sector that are flourishing in Spain and include alternative food networks, cooperatives and networks for basic health care, co-operatives covering shared housing, credit, teaching, and artists and other workers.

Facilitate the de-commercialisation of spaces and activities of care and creativity, by helping mutual support groups, shared childcare and social centres.

7. Optimise the use of buildings. Stop the construction of new houses, rehabilitating the existing housing stock and facilitating the full occupation of houses.

In Spain those objectives could be met through very high taxes on abandoned, empty and second houses, prioritising the social use of SAREB housing (those falling under the post-crash banking restructuring provisions following the Spanish real estate crisis).

If this is insufficient, then proceed with social expropriation of empty housing from private investors.

8. Reduce advertising. Establish very restrictive criteria for allowing advertising in public spaces, following the example of the city of Grenoble.

Prioritise the provision of information and reduce greatly any commercial use. Establish committees to control the quantity and quality of advertising permitted in the mass media and tax advertising in accordance with objectives.

9. Establish environmental limits. Establish absolute and diminishing caps on the total of CO2 that Spain can emit and the total quality of material resources that it uses, including emissions and materials embedded in imported products, often from the global South.

These caps would be in CO2, materials, water footprint or the surface area under cultivation. Similar limits could be established for other environmental pressures such as the extraction of water, the total built-up area and the number of licenses for tourist enterprises in saturated zones.

10. Abolish the use of GDP as indicator of economic progress. If GDP is a misleading indicator, we should stop using it and look for other indicators of prosperity. Monetary and fiscal national accounts statistics can be collected and used but economic policy shouldn't be expressed in terms of GDP objectives.

A debate needs to be started about the nature of well-being, focusing on what to measure rather than how to measure it.

These proposals are complementary and have to be implemented in concert. For example, setting environmental limits might reduce growth and create unemployment, but work-sharing with a basic income will decouple the creation of jobs and social security from economic growth.

The reallocation of investments from dirty to clean activities and the reform of the taxation system will make sure that a greener economy will emerge, while stopping to count the economy in GDP terms and using prosperity indicators ensures that this transition will be counted as a success and not as a failure.

Finally, the changes in taxation and the controls in advertizing, will relax positional competition and reduce the sense of frustration that comes with lack of growth. Investing on the commons and shared infrastructures will increase prosperity, without growth.

We do not expect parties of the Left to make 'degrowth' their banner. We understand the difficulties of confronting, suddenly, an entrenched common sense.

But we do expect radical left parties to take steps in the right direction, and to pursue good policies, such as the ones we propose, independent of their effect on growth.

And we do expect genuine Left parties to avoid making the relaunch of economic growth their objective. Not an easy feat - but a radical left was never supposed to follow the easy path.

Giorgos Kallis is Professor of Ecological Economics at the Autonomous University of Barcelona (Spain) and the co-editor, with Giacomo D'Alisa and Federico Demaria, of 'Degrowth: A Vocabulary for a New Era' (Routledge, 2014).

The three are members of Research & Degrowth (R&D), an academic association dedicated to research, awareness raising and events organization around the topic of degrowth.

Among other projects, R&D promotes the International Conferences on Degrowth for Ecological Sustainability and Social Equity; the last one took place in Leipzig (Germany) with 3000 participants. R&D organizes also summer schools, the forthcoming one on Degrowth and Environmental Justice will take place between the 6th and the 15th of July (2015).

This article originally appeared at The Press Project and has been re-published by Naomi Klein on her Blog as well as in Libération (France) and Der Freitag (Germany).