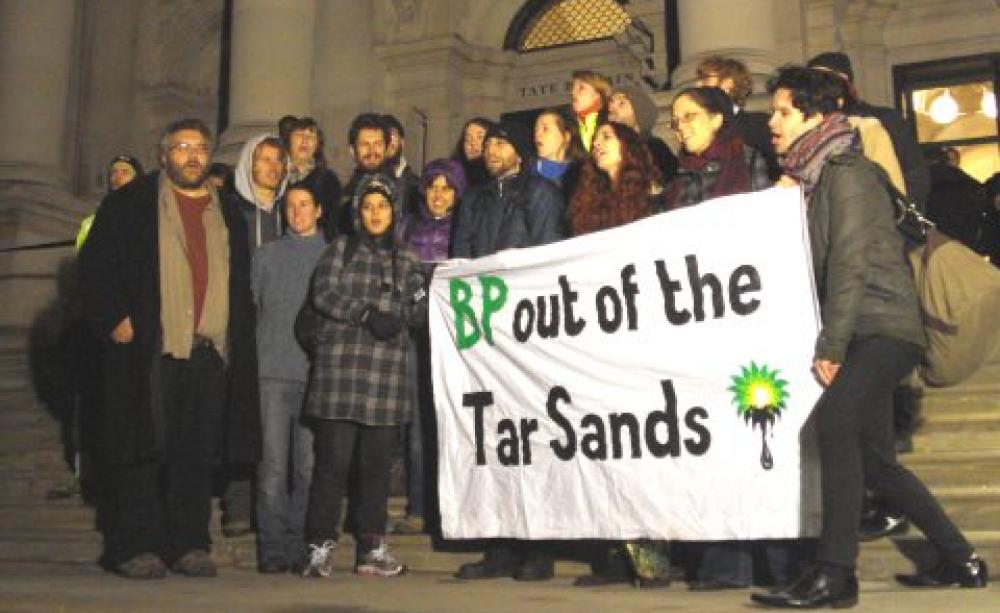 The Reclaim Shakespeare Company chant “Art Not Oil” outside the Tate AGM. Photo: Platform London.
The Information Tribunal has ordered Tate, the charity which runs two of London's biggest art galleries, to release details of financial support from the oil company BP, writes Richard Heasman - and they have until 27th January to comply.

Tate's sponsorship deal provides BP with a veneer of respectability when in reality it is trashing the climate, and involved with a series of environmental and human rights controversies all around the world.

Tate must disclose its sponsorship arrangements with oil giant BP in a landmark ruling by the UK's Information Tribunal after successful campaigning by environmental activists.

After a three-year long tribunal, the Tate is now forced to publish the sum of money BP paid as a sponsor between 1990 and 2006, along with details of internal decision-making on the controversial relationship.

The Tate argued that it "would not want BP to see its activities placed under explicit scrutiny, in case BP was thereby offended in some way that might prejudice the relationship", the Tribunal's decision stated. "We ... consider this concern to be somewhat fanciful."

"We have no doubt that BP is well aware of how its activities are reported in the public domain, and of the nature of the controversies arising around them", the Tribunal continued.

"It would be most surprising if BP expected Tate not to give careful consideration to whether any of the controversies arising from BP's activities should impact on the continuance of the sponsorship relationship."

The decision is the culmination of a lengthy legal battle launched by information law charity Request Initiative. Request's cofounder, and the editor of DeSmog UK, Brendan Montague, were supported by art activist group Platform. Together, they argued that BP's sponsorship of the Tate was controversial and not in the public's interest.

The Tate opposed the request to reveal details about BP's sponsorship on the grounds that full disclosure would catalyse further public protest and upset sponsor relations with BP, both of which were dismissed by the Tribunal.

In response to the ruling, Platform's Anna Galkina said: "We are delighted the sponsorship figures will be revealed.

"Tate's sponsorship deal provides BP with a veneer of respectability when in reality it is trashing the climate, and involved with a series of environmental and human rights controversies all around the world.

"BP is desperate to maintain its 'social licence' through arts sponsorship. But Tate can do without BP, considering the deal is likely worth less than 0.5% of Tate's budget. Sponsorship secrecy makes BP seem more indispensable than it really is - and our culture must dispense with oil corporations."

The campaign has attracted high public interest over the years and has sparked multiple protests and art events at different Tate galleries.

Protest has even come from within the Tate's own ranks, with multiple members of the Tate Gallery openly challenging the art institution's committed secrecy surrounding its partnership with BP during the Tate's annual members meeting, chaired by former BP Director Lorde Browne.

The Tate controversially renewed its sponsorship deal with BP in 2011 after BP's disastrous Deepwater Horizon oil spill when Browne was still Chairman. At the time, Tate Director Nicholas Serota stated: "you don't abandon your friends because they have what we consider to be a temporary difficulty."

The ruling gives the Tate until 20th January to appeal the Tribunal's decision, and another seven days for it to reveal the sponsorship details.

A statement from the Tate said: "Tate is considering the decision of the first-tier tribunal in the BP sponsorship freedom of information case.

"The tribunal upheld many of Tate's redactions and also required the release of some elements of the FOI request, including the release of pre-2007 historic figures forBP funding."

Campaigners hope the ruling will provide a staging area for increased opposition against oil sponsorship of public institutions and maintain the pressure on large oil companies that are allegedly involved in both human rights abuses and environmental destruction across the globe.

Richard Heasman writes for DeSmogUK, where this article was originally published.