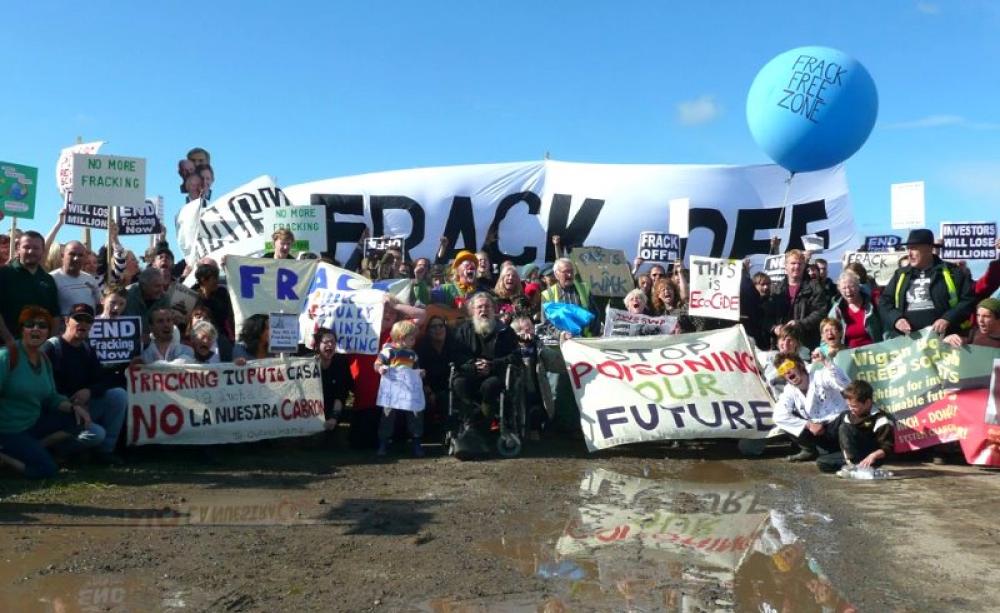 Frack off! Photo: JustinWoolford via Flickr (CC BY-NC-SA).
House prices could fall 7% near fracking rigs, according to the 'secret' Defra report on fracking in rural areas, only published in full after a legal battle, while leakage of waste water could damage human health and contaminate food.

Even if contaminated surface water did not directly impact on drinking-water supplies, fracking could affect human health indirectly through consumption of contaminated wildlife, livestock or agricultural products.

Fracking operations to extract shale gas in Britain could cause nearby house prices to fall by up to 7% and create a risk of environmental damage, according to a government report that has been published in full for the first time.

An official assessment of the impact of fracking, it warned that leakage of waste fluids could affect human health through polluted water or the consumption of contaminated agricultural products.

The report was first published last year in a heavily redacted form under freedom of information rules, prompting the Green MP, Caroline Lucas, to accuse the government of censorship and of trying to hide the negative impacts of fracking.

Two weeks ago the information commissioner's office ruled that the environment department must release the report unredacted.

A crucial time for the UK's fracking industry

The findings of the study come at a crucial time for the government and shale industry, just two days after the surprise rejection by Lancashire county council of what would have been the biggest round of fracking so far.

The report also spelled out possible benefits of fracking, such as generating jobs and economic growth, as well as providing greater energy security for the UK. Rents may also increase due to additional demand from fracking-site workers, it suggested.

It added that communities could benefit from investment in local services and infrastructure due to community payments that shale companies will have to pay to people nearby their operations.

Even if contaminated surface water did not directly impact on drinking-water supplies, fracking could affect human health indirectly through consumption of contaminated wildlife, livestock or agricultural products.

Liz Truss, the environment secretary, has distanced herself from the report, calling it misleading and emphasising its draft nature. Ministers were split over the publication of the report in full, with Truss saying it should not be released, and the energy minister Andrea Leadsom saying the paper was "going to be published".

Tony Bosworth, an energy campaigner at Friends of the Earth, said the timing of the report's release was significant: "No wonder Defra sat on this explosive report until after the Lancashire decisions!"

Lancashire councillors had debated whether to hold off making their planning decision until the report was published in full, but eventually decided to reject bids by Cuadrilla to frack at two sites on the Fylde plain.

The main industry body, UK Onshore Oil and Gas, dismissed the report as being "in danger of extrapolating the experiences of other jurisdictions that have different regulation, planning regimes and geologies".

Ken Cronin, chief executive of UKOOG, said: "It is a shame that this report has become such a cause célėbre as it is merely a review of literature and brings nothing new to the debate or any new information in a UK context."

A Defra spokesman said: "This document was drawn up as a draft internal discussion paper - it is not analytically robust, has not been peer-reviewed and remains incomplete.

"It does not contain any new data or evidence, and many of the conclusions amount to unsubstantiated conjecture, which do not represent the views of officials or ministers."

Adam Vaughan is editor of the Guardian's environment site and tweets at @adamvaughan_uk.

Rowena Mason is a political correspondent for the Guardian.