Keep our bees safe! Liz Truss must say no to neonics 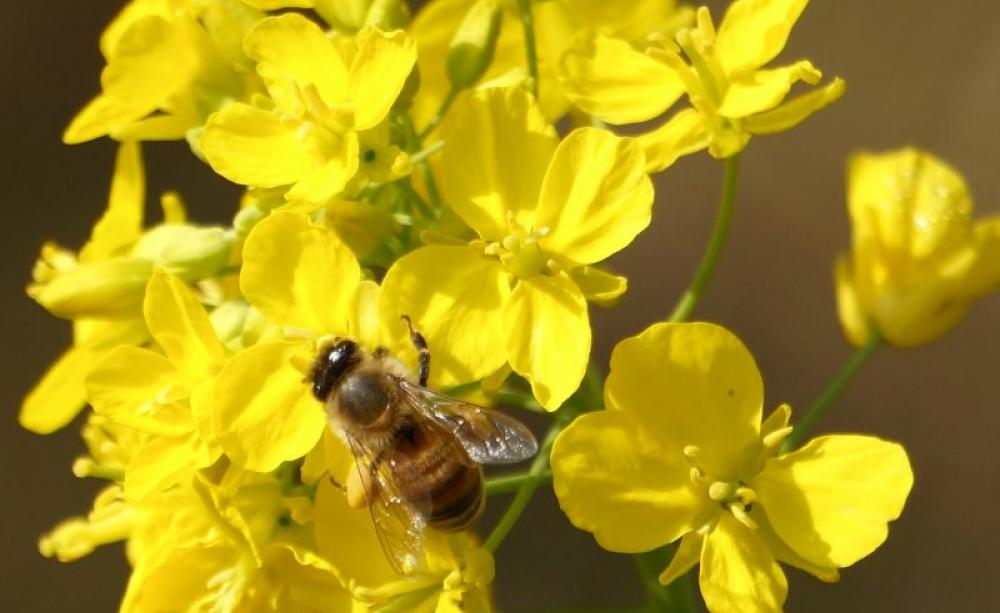 The EU's neonicotinoid moratorium forbids the use of the chemicals on oilseed rape as bees can receive fatal doses while pollinating the plants - but that's exactly what the NFU wants permission to do. Photo: j_arlecchino via Flickr (CC BY-NC).
In 2013 the EU imposed a moratorium on three of the most toxic of the neonicotinoid pesticides in an attempt to save wild bee populations. Now farmers have applied to lift the ban, writes Nat Whalley. Time to call on environment secretary Liz Truss, who today receives a 300,000-signature 'save the bees' petition, to say 'No!'

Not so long ago, summer skies used to hum furiously with bees busy pollinating our strawberries, carrots and cucumbers. Gardens across Britain were a-buzz with the sound of wild bees pollinating our flowers and many of the food and plants we rely on.

But over the last few years, the numbers of bees and other wild pollinators have been declining and our wider web of wildlife is suffering - most of all in the countryside, where bees are under attack from several fronts.

Modern farming methods mean many fewer wildflowers, so food for bees is much scarcer than it used to be. And while some crops are rich nectar sources, they only offer the bees 'feast or famine' - and most of the time, it's famine. Meanwhile  bee diseases like the deadly Varroa mite have spread much further, and so bees are often hit with diseases they have limited resistance to.

Meanwhile new insecticides - chief among them the neonicotinoids, super-toxic variants of the nicotine found in tobacco - have been introduced which poison and kill bees in huge swathes. Scientific research has proven beyond doubt that the 'neonics' are highly toxic to bees even at very low concentrations, and most especially to wild species such as bumblebees.

So strong is the evidence that in January 2013 the European Food Safety Authority announced that neonicotinoids pose "an unacceptable risk" to bees, and in April the EU approved a two-year moratorium on the most damaging uses of three of the chemicals, to take effect in December.

As Prof Dave Goulson, professor of biology at the University of Sussex, put it: "In short, bees are hungry, diseased and poisoned."

Now the UK Government may try to lift from the ban

Despite all the evidence, the UK Government opposed the EU moratorium in 2013, apparently caving in to the powerful commercial farming lobby. And now it's considering lifting the ban on these pesticides here in the UK.

A few weeks ago the government received an application from the National Farmers Union (NFU) for a neonicotinoid 'derogation' - an emergency licence to use the banned insecticides, to allow them to be sprayed on oilseed rape crops this summer.

The NFU claims that it has to use the pesticides to kill off a pest of oilseed rape, the cabbage stem flea beetle, in order to prevent widespread crop losses. But in fact, current predictions are for a good oilseed rape harvest - even under the moratorium.

This application follows a similar application by Syngenta last summer to break the EU-wide ban and introduce neonicotinoids back onto UK fields. That attempt led to a outcry from scientists and the public. But only following a huge petition and a swarm on Parliament by 38 Degrees members and other bee campaigners, was the application withdrawn.

Syngenta, Bayer, and other chemical companies keen to peddle their neonicotinoids to UK farmers often claim that the evidence around bee decline and neonicotinoids is unclear. But it's nothing of the sort. Indeed new evidence has only shown that they are even more dangerous that previously supposed.

Earlier this year the European Academies Science Advisory Council concluded that these banned pesticides don't just kill bees, they wreak "havoc" with other insects and plants in the wider countryside too. This followed earlier work published in July 2014 showing that the impact of neonics reverberated through the entire food chain, even hitting bird populations.

But despite all the evidence, the companies are still clamouring to make a profit selling their toxic chemicals to farmers, supporting the application for the derogation.

This time around, the Expert Pesticide Committee advised the agriculture department, Defra, that "the criteria for an emergency authorisation ...  were met." But paradoxically, they added that if the neonics are allowed, they would "encourage the applicant to take the opportunity provided by practical use of the product to gather further data on risks to bees."

This is at best a very feeble defence of the unacceptable - by a committee of which three members have close links to the bee-killing pesticide companies Syngenta and Bayer.

The scientific evidence on the danger of these pesticides to wild bees is already clear - if these pesticides are allowed back on our fields, bees will start dying. Yet the committee are encouraging that the application goes ahead - and hoping that farmers will voluntarily undertake scientific research to assess the impact on bees. If the matter weren't so grave, their recommendation would be comical.

These pesticide companies are desperate to break the ban and get their toxic products back on UK fields. They may have the money to make a lot of noise, but we have something their cash can't buy: people power. When we stand together, we stand for the interests of the many over the few.

There are only a couple of weeks for the government to make its decision on this derogation application before it will be too late for the seeds to be treated and planted with the toxic chemicals in time for a harvest later this year.

So we have just a few weeks to show the government that if it grants the derogation, it will be not only going against science, but it will also be going against public opinion too.

290,000 have already signed the petition

Already, over 290,000 38 Degrees members have signed a petition to push Liz Truss, Secretary of State for the Environment to reject the application and keep the ban.

And this afternoon, 38 Degrees member Pat is delivering the petition to her MP Liz Truss - the Secretary of State for the Environment - and will ask her directly to save our bees and deny the application.

People-power protected our bees last time an application to thwart the EU-wide ban on neonics was made. Now, we need to pull out all the stops again. The environment minister needs to hear that she needs to protect our bees, not the toxic profits of bee-killing chemical companies.

This is a fight about bees, wildlife, the countryside we all hold dear and long-term sustainability over short-term profit. Which side are you on?

Nat Whalley is a Campaigns Manager at 38 Degrees and founder of the London International Development Network, an informal place to share development news, views, events and career opportunities. she has also worked for Save the Children, SoClick and Avaaz. In her spare time you can find her singing with her  show choir or playing the saxophone about town.