Anthropology is so important, all children should learn it 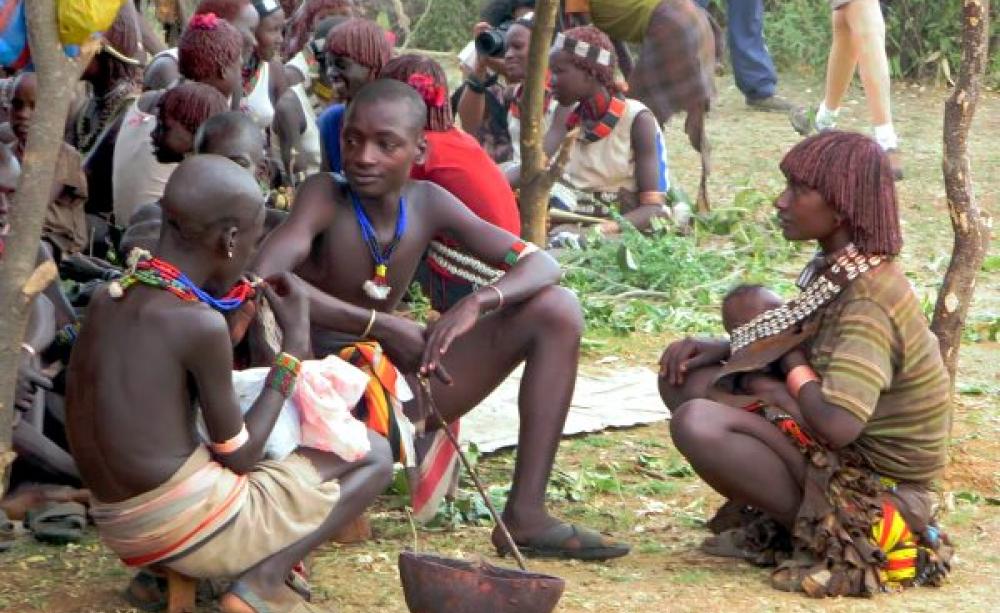 Hamer people in a village near Turmi in the Omo Valley of Southern Ethiopia - now at risk from a huge dam project and sugar plantations. Photo: David Stanley via Flickr (CC BY 2.0).

Spot the anthropologist? Hamer people in a village near Turmi in the Omo Valley of Southern Ethiopia - now at risk from a huge dam project and sugar plantations. Photo: David Stanley via Flickr (CC BY 2.0).

Anthropology, the study of humankind, should be the first of all the sciences our children encounter, writes Marc Brightman, with its singular capacity to inspire the imagination, broaden the mind and open the heart. Moves to downgrade it in the education system by those who know the price of everything, and the value of nothing, must be fought off.

Opening children's eyes to the wonders of cultural diversity, and the different ways of living sustainably in the world, ought surely to be a core aim of our education system.

Anthropology has been in the news because its A-level, only introduced in 2010, is under threat.

This discipline has never been more important at a time of troubling intolerance in society, but it does far more than merely help understand ethnic diversity.

Anthropology includes biological, linguistic and medical fields as well as social and cultural ones, and is as much about human ecology as it is about the 'ecology of mind', to recall the title of Gregory Bateson's classic work.

I can remember when I was choosing what to study at University. I loved languages, literature, history and art, and I yearned to travel. But I had never heard of anthropology.

It was only later, as a student of English literature, that I read Lévi-Strauss's Tristes Tropiques and was spellbound by the story he told of his experience of the degradation of the environment by colonialism, and of the mental worlds of the Bororo and Nambikwara people, which were so close to having been obliterated.

Many of my students tell me similar stories of how they discovered anthropology by accident, and when I tell them about the anthropology A-level they say they wish they could have taken it at their school.

Anthropology is a key to ecology as well as culture

Lévi-Strauss's melancholy tone, expressed in the title of his book, comes from witnessing the erosion of both cultural and biological diversity. Rooted in older disciplines closer to the natural sciences, such as geography and biology, as well as in humanities and social sciences, anthropology is about human ecology, different ways of being in the physical world, and about sustainability - not just culture and identity.

It is good that the press has recently covered the well justified protests against the axing of the anthropology A-level before it has even been given a chance to take root (most schools still do not have the capacity to offer it). But the reports emphasise only the value of anthropology for understanding cultural difference.

Yes, it is true that anthropology can help us to understand and relate to different cultures, different ways of being in the world. It can certainly offer ways to educate people to become more tolerant of diversity. But anthropology is much more than this.

In the face of a global ecological crisis which most of the press fails to take seriously, the discipline also has much to offer. Anthropologists are well known for documenting traditional livelihoods, which are often sustainable adaptations to environments which would be difficult to live in without rich bodies of traditional knowledge and practice to draw upon.

Opening children's eyes to the wonders of cultural diversity, and the different ways of living sustainably in the world, ought surely to be a core aim of our education system.

As The Ecologist frequently reports, many indigenous peoples have a wealth of traditional knowledge, which is embedded in complex sets of practices that are compatible with, and indeed founded upon, long term ecological relations.

Anthropologists have been at the forefront of efforts to understand these practices and to bring them to the attention of the wider world. We show how people manipulate their environments to make them more productive, rather than depleting the resources that they find - examples of anthropogenic forest islands or dark earths are cases in point.

The myth of 'wilderness'

Land that is not intensively farmed is often all too easily labelled as 'wilderness', and incorporated into the economist's category of 'natural capital', inviting the naïve conclusion that by subjecting it to the laws of supply and demand it will find its true value.

But the value of land, as my work on REDD+ has shown, alongside many other anthropological studies, cannot be simply reduced to exchange value on the market, and attempts to do so can be severely harmful to people and to the environment.

My colleague at UCL, Jerome Lewis, has shown how the sharing economy of Mbendjele hunter gatherers in Congo-Brazzaville, and their intimate relationship with the forest, are invisible to neighbouring farmers, logging companies and conservation organisations, often leading to dispossession and abuse, as others have shown in this magazine.

In my own work, in collaboration with Brazilian scholars, I have shown how ownership plays a fundamental role in structuring social relations among native Amazonian peoples.

When states and extractive industrial actors make claims to land on the basis that it is not used - that it is terra nullius - they often do so in profound ignorance of both indigenous practices and indigenous property regimes. Anthropologists are often well placed to mediate in such cases.

Is the real problem that it's seen as 'subversive'?

The noises made by the Education Secretary about academic 'rigour' ring false as an excuse for axing anthropology, a discipline which at its best combines scientific precision with the critical awareness of the humanities.

Anthropologists also provide robust, evidence based critiques of the assumptions of policy makers and technocrats who offer tempting 'win-win' solutions to problems of sustainable development. Far too many well-meaning development projects do not take detailed account of situations on the ground, and fail in their objectives, with unintended and sometimes destructive consequences, both for the environment and for native inhabitants.

Perhaps for this reason anthropology is perceived as too subversive - it does indeed foster critical thinking that can be uncomfortable for those in power, especially in the hands of incisive and influential critics of the establishment such as David Graeber.

Successive governments have made claims to basing their policies on scientific knowledge. But the fact is that they usually only do so when it suits them, and scientific arguments are taken piecemeal to justify preconceived policy objectives.

The idea of natural capital has been enthusiastically taken up by policymakers from economists such as Partha Dasgupta, because it can be used to bolster a bold new rhetoric about launching a 'green economy', while in reality making few fundamental changes to business as usual.

The natural capital paradigm is not necessarily something to be rejected wholesale, but it must be recognised for what it is: a universalising discourse which has very particular historical origins in Western capitalism.

'Nature' is not an object, and is not separate from culture, for many peoples of the world. Indeed many of the 'natural' landscapes that conservation organisations try to preserve are the product of efforts over the centuries of indigenous peoples - the very peoples who are all too often evicted to make way for hunting lodges, plantations or 'carbon sinks' that only benefit the wealthy.

We should all study anthropology - beginning at primary school!

There is an increasing consensus among those involved in addressing the global ecological crisis that the natural sciences and economics cannot succeed without input from the arts, humanities and social sciences, as a recent conference at UCL resoundingly showed.

Anthropologists routinely deal with local and global phenomena, working at the interface of the arts and the sciences. We have something very important to contribute, and sometimes we are given this opportunity.

So anthropological knowledge is in demand, and not merely in the field of cultural identity. To limit the argument about the value of the anthropology A-level to identity politics does a disservice to the discipline.

Anthropology provides students at any level with the critical awareness need for key issues of our times, which are not just religion and ethnicity, but also global sustainability, biocultural diversity and environmental governance. It also gives an excellent preparation for the study of other, more established disciplines such as history, English literature or geography.

More anthropologists are needed in public life, and then the discipline will really influence society and the environment - and very much for the better.

Far from axing the anthropology A-level, the government should support its expansion into the school system at all levels. When I arranged for Nixiwaka Yawanawá of Survival to speak to my son's primary school in Oxford, he gave a basic anthropology lesson to a packed assembly of children aged from four years old upwards, and created a real sensation.

Parents and teachers, as well as children themselves, came to me for weeks afterwards to comment on what a powerful and inspiring experience it had been.

Opening children's eyes, from the earliest ages, to the wonders of cultural diversity, and the different ways of living sustainably in the world, ought surely to be a core aim of our education system.

Action: Sign the teachers' petition to save anthropology in schools.

Marc Brightman is Lecturer in Social and Environmental Sustainability in the Department of Anthropology at University College London. Together with Jerome Lewis, he is co-founder and co-director of the Centre for the Anthropology of Sustainability.