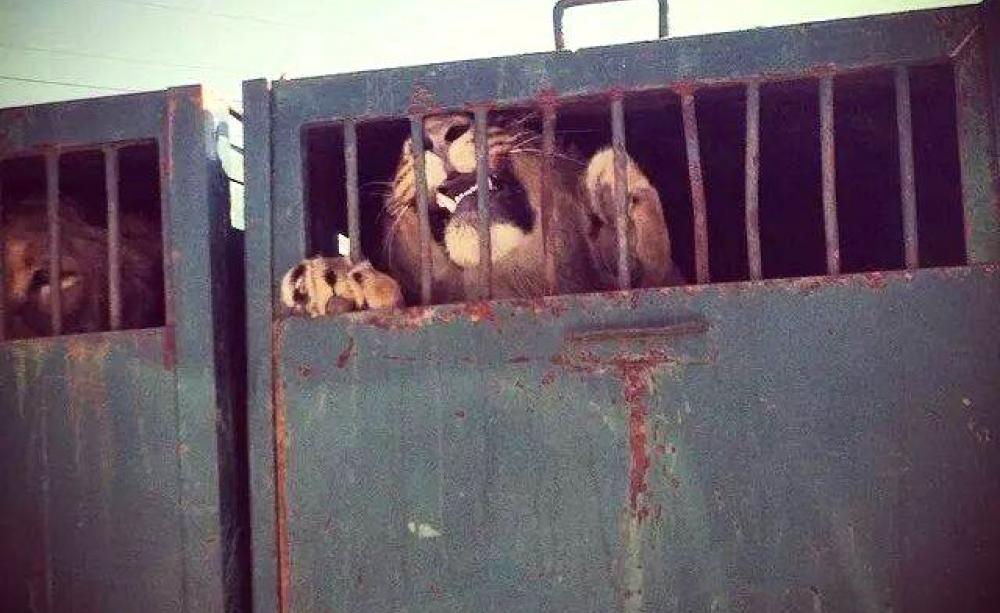 Lions being transported for a canned hunt. Photo: Campaign Against Canned Hunting.

Two thirds of Africa's lions have been lost in 35 years, and would-be hunters are increasingly shooting captive, farmed and often tame lions in 'canned hunts'. Claims are that this helps to preserve wild lion populations - but Dominic Dyer fears the reverse is the case.

The fear is that the mostly legal trade in bones from farmed lions killed in canned hunts could provide cover for an illegal trade in wild lion bones - and possibly tiger bones as well.

As the United for Wildlife conference begins in Kisane, Botswana today, here's something for delegates to ponder.

In 1980 more than 75,000 wild lions roamed the African Continent. Today it is estimated that fewer than than 25,000 survive in 23% of the territory they once inhabited.

The world has at last woken up to the tragedy facing Africa's elephants and rhinos but has been far too slow to realise the desperate plight of Africa's lions. From habitat loss to human-wildlife conflict and hunting, the African lion is facing a battle on all sides to survive.

To shoot a wild lion in Tanzania may cost in the region of $50,000 to $80,000 a price beyond the reach of all but a small number of extremely wealthy hunters.

However, in South Africa, farmers have gone into the bargain basement hunting business by breeding lions to be shot by hunters for a fraction of the price, in so called 'canned hunting' operations.

Unlike Tanzania where a hunter might only expect a 35% success rate in hunting a wild lion, the South African canned hunting operations guarantee a kill by supplying a lion who has normally been hand-reared from a cub and by placing the animal in an enclosure, where there is likely to be no escape from the hunter.

A female lion in a canned hunting operation in South Africa can be killed for as little as $5,000; males are more expensive in the region of $25,000, but still less than half the cost of shooting a wild lion in Tanzania.

The canned hunting operations now even breed a genetic variant of a lion for the hunter, white lions with blue eyes are in high demand and command a significant price premium in the global trophy hunting market.

This massive reduction in the cost of lion shooting is bringing in hundreds of new amateur trophy hunters into South Africa every year and this has led to a huge increase in the lion breeding business.

South Africa is now home to around 160 lion farms breeding more than 5,000 lions a year on a conveyer belt of brutality and cruelty for trophy hunters from Dallas to Shanghai.

These canned hunting operations are very poorly regulated and the animal welfare conditions of the lions in what is an intensive breeding process are often extremely poor.

Although Provincial Regulations do set criteria on the minimum size for holding facilities and the time limits for the transfer of lions from the breeding farm to the hunting enclosure, these are not effectively enforced.

Many canned hunting operations allow poorly trained marksmen to shoot lions with a high powered rifle or a bow. In many cases the lions are only wounded by the amateur hunters, and have to be killed by a professional marksmen, resulting in a prolonged painful death.

Protecting wild lions? Or endangering them?

The canned hunting operators claim they are protecting the future of wild lions by breeding lions for trophy hunters, however this could not be further from the truth. Most trophy hunters are only interested in taking the skin or the head of the lion they have shot, leaving the most valuable part of the carcass, which are the bones.

The canned hunting operators have seized on this valuable commodity and are now exporting lion bone to the lucrative medicine markets of China, Laos and Vietnam. The lion bone trade is now a growing source of revenue for the canned breeding facilities and there are concerns this could be leading to an increasing level of poaching of wild lions.

The fear is that the mostly legal trade in bones from farmed lions killed in canned hunts could provide cover for an illegal trade in wild lion bones - and possibly tiger bones as well.

We have no direct evidence that this is the case, but clearly the possibility is there, and it's a high priority for conservation organizations including Born Free Foundation to investigate whether this is actually taking place.

Farmed lions are likely to be more genetically uniform than wild ones, and some 'breeds' - like the white-skinned blue-eyed lions mentioned above - will carry specific genetic markers, so DNA analysis of 'legal' bones could give important indications of the presence of wild lion remains.

Many of these operations claim to be conservation projects and even enlist volunteers to help look after the lions, but in many cases the dark truth is that the lions are destined for the guns and bows of trophy hunters.

"Tourists and in particular volunteers are being duped", says Paul Tully of the Campaign Against Canned Hunting. "There is no conservation value in petting lion cubs or walking with lions. One question needs to be asked of these facilities - where do all these lions go once they've grown up?"

Public anger over the canned lion hunting business is growing rapidly and on the 13 March protests took place in London and cities and around world as part of the Global March for Lions. The Australian government has reacted by banning the import of hunting trophies from the body parts of lions.

The Environment Minister Greg Hunt who announced the crackdown at the Global March for Lions in Melbourne's Federation Square said "the practice of canned hunting was cruel and barbaric."

Following this move by the Australian government, the focus now moves to Brussels where the European Commission has agreed to introduce a new system of import permits for body parts from endangered species including lions. This measure is intended to ensure that any imported hunting trophies are both legal and sustainable.

The new rules should result in the ban on the import of lion hunting trophies from a number of West African countries where there is real concern that lions are not being hunted sustainably including Benin, Burkina Faso and potentially Cameroon.

However these new regulations are unlikely to stop the import of hunting trophies from South African canned lion hunting operations, which account for the vast majority entering the EU every year. As the EU currently views these operations as legal and not a threat to wild lion populations.

The US Department of the Interior's Fish and Wildlife Service is currently finalizing a rule to list the African lion as a 'threatened species' under the US Endangered Species Act, with a special rule that would only allow lion trophy imports from countries with an approved, scientifically-sound, management programme for the species.

An unacceptable trade that must be ended

To help draw global attention to the cruelty and greed behind the canned lion hunting business an award winning film maker and photographer Marta Ariza, is producing a film called 'Death for a Trophy' to be released in the Autumn.

It is hoped this film will do for the canned hunting what Black Fish did for SeaWorld, by raising global awareness of the cruelty, exploitation and greed which lie at the heart at of the booming canned hunting business in South Africa.

Time is running out for the African Lion, the king of the jungle is fast heading towards extinction. If we are to protect their future, there can be no justification for the continued hunting of wild lions and the cruel canned hunting business should be shut down for good.

Dominic Dyer is Policy Advisor at the Born Free Foundation, which recently merged with Care for the Wild.

With thanks to the Campaign Against Canned Hunting.