Before the day is out - we must unite and demand fair voting! 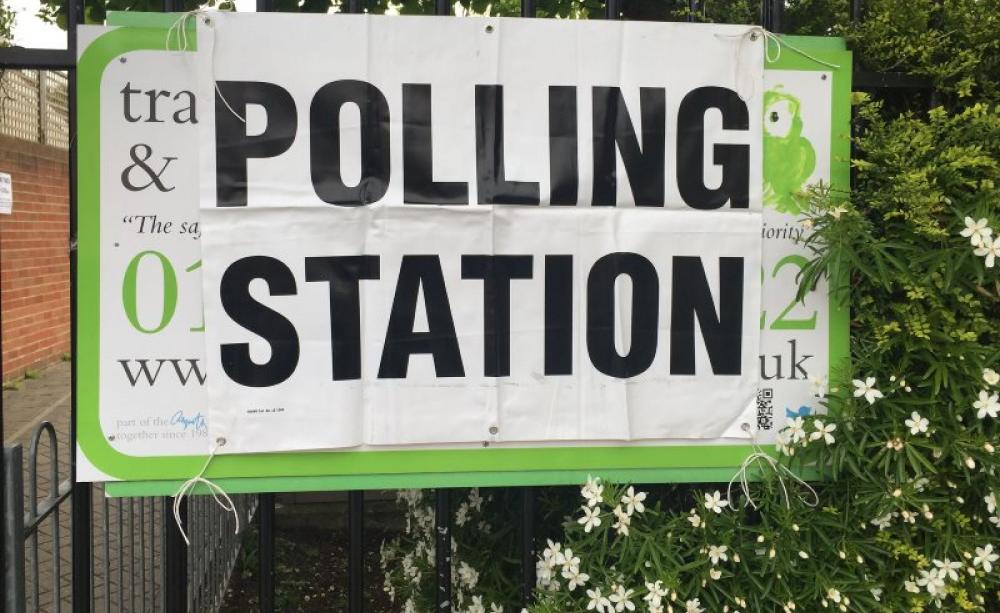 A polling station in Twickenham, 7th May 2015. Photo: Andrew Hall via Flickr (CC BY-NC-ND).
The UK's decisive Conservative victory is the result of a grossly unfair electoral system.The 'winners' were backed by under 25% of the electorate, the losing Labour vote went up by twice as much as the Tories' - and some MPs represent as few as 23,000 voters, others over 3 million. We must now demand real democratic reform.

Our democracy is deeply, badly broken on multiple levels, a relic of past ages that is unfair, unrepresentative and blatantly unfit for purpose.

If there is any lesson to be taken from the recent election, it is that the very term 'British democracy' has become a contradiction in terms.

There are many things wrong with our electoral system, of course, but as we survey today's election results the most striking fact is the disconnect between votes won, seats in Parliament, and who has emerged with complete political power in their grasp.

On the basis of a share of the national vote that went up by a mere 0.8%, the Conservatives took an additional 24 seats, gaining an overall 12-seat majority in Parliament.

Thus they have gained the absolute right to govern the UK and its peoples for the next five years, on the basis of just 37% of the vote - slightly under 25% of those registered to vote. Or to summarise: 25% of the electorate; 37% of the vote; 51% of MPs; 100% of the power.

Now the only effective opposition to their one-party rule will come from dissidents and mavericks within the Conservative party itself.

One clear measure of the 'fairness' of the electoral system is the number of votes taken to elect an MP of any given party. On average, it takes 47,000 votes to elect an MP. But there are wide variations - here is a quick calculation (to nearest 1,000) based on final results:

Most egregious, clearly, is the case of UKIP and the Greens, whose combined vote of almost 5 million won them precisely two MPs. On a proportional basis UKIP would have won 82 MPs and the Greens 26.

At the other extreme, the DUP - which may well play an important role in cushioning out the Conservatives' narrow majority - got twice as many seats than deserved by their proportion of the vote. Likewise the SNP 'should' have won 31 MPs, not 56.

The Conservatives and Labour should have won 233 and 193 seats respectively. And in order to form a government - one which would have to have the support of enough MPs represent a majority of the population - either would have needed to combine forces with other parties and make compromises accordingly.

But in fact, under a proportional system the vote would, surely, have come out very differently anyway - as the outcome we face today is in large part the result of tactical voting.

Under the 'first past the post' system, not only do our votes not translate fairly into elected MPs, but in an even deeper injustice, many of us feel forced to vote against our beliefs - to support the 'least bad' with a perceived chance of victory, to keep out the greater enemy.

Our democracy is deeply, badly broken on multiple levels, a relic of past ages that is unfair, unrepresentative and blatantly unfit for purpose.

Why it's time for proportional voting

If people knew their votes would turn into MPs in a proportional way, many more people would have backed the Greens without worrying that to do so would 'let in the Tories' in Labour-Conservative or Labour-LibDem marginal constituences.

More people would have voted for UKIP as well - but perhaps not so many more. Many of its voters really did believe that their electoral breakthrough was about to take place. How wrong they were.

And don't forget the even greater number of electors who don't vote at all - about 34% in this election. Many of them don't bother out of frustration with the unfair voting system, and a sense that their vote would make no difference anyway. If they knew their votes really counted, a great many of yesterday's absentees would have found it worth showing up at the polling station.

But as things are our democracy is deeply, badly broken on multiple levels, a relic of past ages that's unfair, unrepresentative and blatantly unfit for purpose. It's well past time for a system in which we know that our vote will contribute directly to the election of MPs in Parliament to represent our views, and of the government that will rule over us.

And that's something that democratic forces from across the political spectrum - from UKIP to the Greens, from the LibDems to Occupy Democracy - must now come together in common cause and demand - beginning today!

This article is published under a Creative Commons Attribution-NonCommercial 3.0 licence.