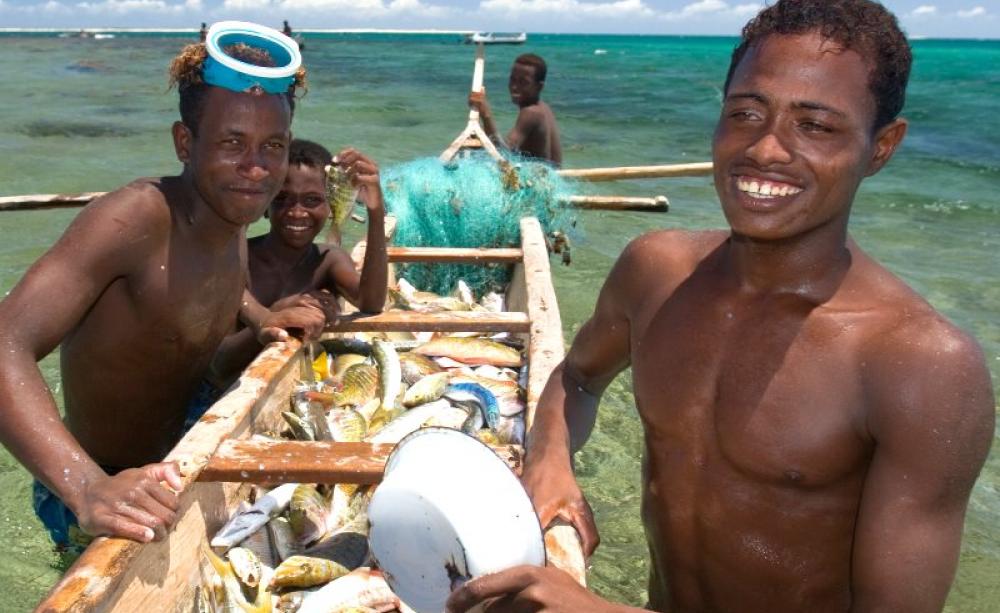 Young fishers with their catch on the opening day after a temporary fisheries closure. Small-scale fisheries support the livelihoods of at least 500 million people worldwide - Andavadoaka, Madagascar. Photo: Garth Cripps / Blue Ventures.
Marine conservation is usually expressed in austere and negative terms, writes Alasdair Harris, with strict quotas and exclusion zones. But the truth is the exact opposite: it's about working with natural ecosystems to unlock their productive potential, creating sustainable wealth and abundance for fishing communities while enhancing marine biodiversity.

Conservation doesn't need to be about taking less. It can be one of the highest yielding opportunities on the planet because of the speed and productivity with which fisheries can recover.

Our work began 12 years ago in a single coastal village in Madagascar.

With communities facing extreme poverty and their fisheries collapsing, we started by encouraging locals to cordon off a small section of their octopus fishing area for 7 months.

When it was reopened the community saw huge increase in not only their catch, but also their incomes.

Going viral along the Madagascar coast

Since then, this temporary fishery closure model has gone viral along thousands of kilometers of Madagascar's coastline, spawning a grassroots marine conservation revolution with 64 more Locally Managed Marine Areas established to date.

Our work is about much more than just octopus. These experiences have guided our journey searching for new approaches to demonstrate that marine conservation can be in everyone's interest and that taking less from ocean can give us much, much more.

We work in places where the ocean is vital to local cultures and economies and is home to some of the highest levels of marine biodiversity on the planet. These areas are now experiencing unprecedented threats from climate change and overfishing.

Currently 90% of the world's fisheries are fully fished or overfished, negatively impacting 1.5 billion people who live around tropical coasts. This includes 500 million people directly dependent on small-scale fishing, many of whom are among the worlds poorest.

Rather than some of the other flawed conservation models consisting of 'ocean grabbing' (as previously discussed in The Ecologist), we work to engage rather than alienate local people and help them recognise their rights.

We aim to show that not only is it the fair and reasonable way to behave, but that our model can be a far better and more durable approach in terms of conservation outcomes.

It's about growth, not austerity!

All too often, there's a fear that forgoing fishing in protected areas represents a severe economic sacrifice and the promised 'spill-over' benefits of marine protection can be slow to accrue.

But our approach is bringing tangible benefits quickly. We achieve this by focusing first efforts on the quick reproducing and quick recovering species that respond very favourably to management.

This works to demonstrate to other communities what is possible. Many conservationists overlook these 'low hanging fruit' - asking too much too soon - by looking at species that take years to recover. By focusing on the easy wins, we can see results faster and communities are impressed at how quickly their fisheries can recover.

Conservation doesn't need to be about taking less. It can be one of the highest yielding opportunities on the planet because of the speed and productivity with which fisheries can recover.

Our use of periodic fisheries closures for the right species gets people interested and engaged, reaping dividends in workable timeframes. We also focus on reducing communities' dependence on fishing through a number of different initiatives including environmentally sustainable seaweed and sea cucumber farming.

In Madagascar we've helped local people to establish the world's first community-based sea cucumber farms. Sea cucumbers, which play an important role in the marine ecosystem, are in high demand as an aphrodisiac in Asia but have been almost totally wiped out by overfishing for Asian markets.

Farming them enables local people to harvest them sustainably, supplementing their fishing incomes. Conservation doesn't need to be about taking less. It can be one of the highest yielding opportunities on the planet because of the speed and productivity with which fisheries can recover.

But it's only by working closely with local communities can we ensure this continues to be the case.

Investing in education and reproductive health in coastal communities

We realised that poor local health services and rapid population growth - in the coastal community of Velondriake in southwest Madagascar it is doubling every 10 years - also puts pressure on the natural environment.

84% of people in Velondriake have said they are worried there would not be enough resources to survive if they did not practice family planning and 90% of women have expressed the desire to be able to plan their pregnancies, something for which there was no service provision when we first arrived.

We responded to these unmet demands by providing family planning and maternal health services, and since introducing the program in 2007 have seen a rapid uptake in contraception use.

In Velondriake it has risen five fold in this time, which is partly down to the relationships we have built with communities through our collaborative marine conservation work, but also due to our culturally sensitive rights-based approach to providing healthcare.

Irene, who lives in Tampolove, Madagascar, was in her final year of secondary college when she had her son, now four years old. She decided to start using family planning so she could work and afford to support her son.

Irene now grows seaweed and sea cucumbers through an aquaculture initiative supported by Blue Ventures. She also has a small business selling products that she sources from outside the village. Thanks to these efforts she's been able to build a large house with four rooms, buy several goats and pay for her son's school fees.

International recognition means our model of conservation can be rolled out more widely.

When we found out we were one of four recipients of this year's Skoll Awards for Social Entrepreneurship, we felt hugely honoured - even more so as we were the only European organisation to be recognised this year.

The three-year core support investment allocated with the award will be used to scale up our work dramatically. We aim to offer support to partners replicating our models in order to reach three million people in tropical coastal communities by 2020.

Our models work by demonstrating that conservation can yield meaningful benefits of communities in realistic timescales. Only by making this connection can marine conservation be sustained and scaled beyond its current limited scope.

The grassroots movement inspired by these catalytic models for community led marine management has led to unprecedented national level support for marine conservation in Madagascar, with the President recently committing to triple the coverage of the country's marine protected areas, with a special emphasis on local governance.

So far our work has impacted the lives of more than 150,000 coastal people, but this is just the beginning. In collaboration with our many partners, our goal is to engage 3 million people in tropical coastal communities over the next five years.

We believe that this is the scale required to drive systemic change, by creating a new paradigm in which marine conservation works for - rather than against - fishing communities.

Alasdair Harris is a marine ecologist with an unhealthy obsession for corals, and the founding CEO of Blue Ventures. He has spent the past decade developing conservation initiatives in the Indian Ocean, and led his first marine research expedition to Madagascar in 2001. He is the recipient of a 2015 Skoll Award for social entrepreneurship.