The devil in disguise: unmasking the 'humanitarian' GMO narrative 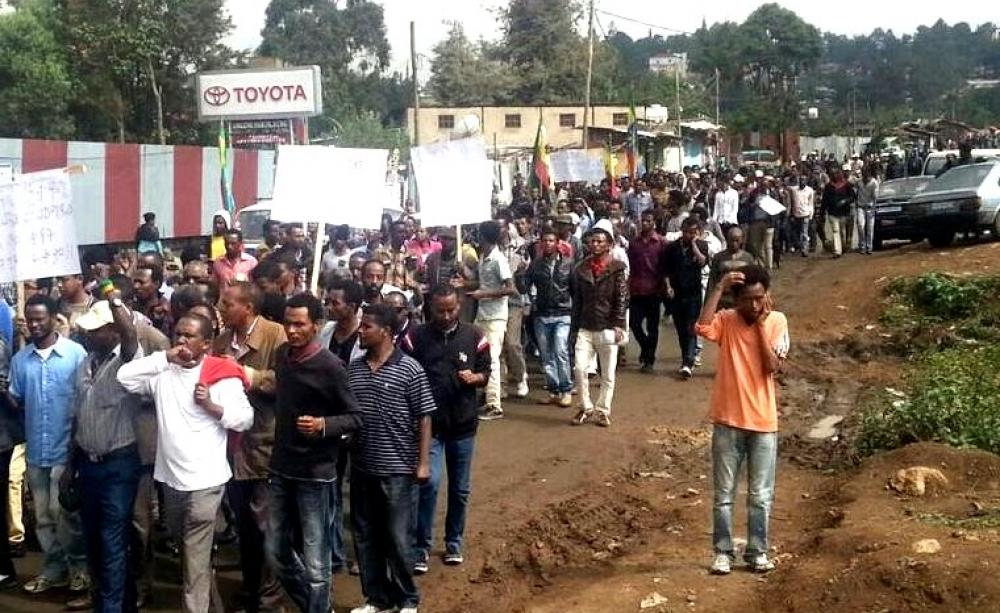 Where were the GMO 'humanitrian' lobbyists? Hundreds of thousands of protesters in Ethiopia’s capital Addis Ababa demanding an end to the eviction of Oromo farmers for agricultural 'development' projects, 24th May 2014. Photo: Gadaa.com via Flickr (CC BY-ND).

Where were the 'humanitarian' GMO lobbyists? Hundreds of thousands of protesters in Ethiopia’s capital Addis Ababa demanding an end to the eviction of Oromo farmers for agricultural 'development' projects, 24th May 2014. Photo: Gadaa.com via Flickr (CC BY-ND).

Corporate lobbyists and their tame politicians love to present GMOs as being humanitarian in purpose, writes Colin Todhunter - as if they exist only to feed the starving millions. But if that's the case, why are they silent on genocidal land grabs, agrochemical poisonings and the destruction of efficient, productive smallholder farming?

If corporate aims cannot be achieved via trade agreements or the machinations of international institutions like the WTO, they are sought on the back of war and strings-attached loans.

Genetically modified (GM) crops are going to feed the world. Not only that, supporters of GM technology say it will produce better yields than non-GM crops, increase farmers' incomes, lead to less chemical inputs, be better suited to climatic changes, is safe for human consumption and will save the lives of millions.

Sections of the pro-GMO lobby are modern-day evangelists who denounce, often with a hefty dose of bigoted zeal, anyone who questions their claims and self-proclaimed humanitarian motives. But their claims do not stack up.

Even if some of their assertions about GMOs (GM organisms) appear to be credible, they are often based on generalisations, selective data or questionable research and thus convey a distorted picture.

The claims made about GMOs resemble a house of cards that rest on some very fraudulent foundations indeed (see 'Altered Genes and Twisted Truth' by Steven Druker).

The fact that many of the pro-GMO lobby spend a good deal of their time attacking and smearing critics and flagging up the technology's alleged virtues while ignoring certain important issues says much about their priorities.

Do the GMO lobbyists care one iota for the farmers they claim to benefit?

If they care about farmers so much, indeed if they value food security, choice and democracy so much - as they frequently claim to - why do they not spend their time and energy highlighting and challenging the practices of some of the corporations that are behind the GM project and which have adversely impacted so many across the world?

For instance, consider the following.

1. There is a massive spike in cancer cases in Argentina which is strongly associated with glyphosate-based herbicides - a massive earner for agribusiness.

Not only that but throughout South America smallholders and indigenous peoples are being driven from their lands as a result of a corporate takeover aimed at expanding this type of (GM) chemical-intensive agriculture. The outcome has been described as ecocide and genocide.

If corporate aims cannot be achieved via trade agreements or the machinations of international institutions like the WTO, they are sought on the back of war and strings-attached loans.

2. GM technology has not enhanced the world's ability to feed itself and has arguably led to greater food insecurity (also see this).

3. Petrochemical, industrialised agriculture is less productively efficient than smallholder agriculture. However, the latter is being squeezed onto less and less land as a result of the expansion of corporate commodity crop farming and the taking over of fertile land by institutional investors and agribusiness concerns.

As a result of this, the world is in danger of losing the ability to feed itself. Across the world, not least in Asia, peasant farming is being dismantled in favour of this type of corporate agriculture, which is unsustainable and associated with cancers, water contamination, soil degradation and falling water tables.

4. This is a model that from field to plate is causing obesity, diabetes and various other ailments and diseases. Facilitated and supported by trade agreements like NAFTA, people's quality of food is being sacrificed and local farming devastated (see this to read about the situation in Mexico).

5. In India, 300,000 farmers have committed suicide over the past 20 years as farming has deliberately been made financially non-viable. The aim is to displace hundreds of millions who rely on agriculture to make a living and free up land for Western agribusiness to reshape farming.

As NAFTA has done to Mexico, the agribusiness-backed Knowledge Initiative on Agriculture seems likely to do to India. The aim is to dismantle Indian agriculture for the benefit of corporate agribusiness.

Farmers of the world, unite!

We now witness grass-root responses to what is outlined above on a daily basis: farmer protests on the streets of Delhi and local movements from Ghana to Brazil resisting the corporatization of seeds, land, water, food processing, food retail and decision making / regulatory processes.

We also see the wrecking of traditional, productive rural economies and the attack on indigenous knowledge at the behest of global agribusiness, facilitated by compliant politicians.

If corporate aims cannot be achieved via trade agreements or the machinations of international institutions like the WTO (whose rules agribusiness shape), they are sought on the back of war or through strings-attached loans as is the case in Ukraine.

Objectives are sought by various means. The world can feed itself without GMOs. It is current policies and the global system of food production that militate against achieving global food security and which contribute towards hunger and poverty. No amount of gene splicing can rectify this.

How convenient it is for sections of the pro-GMO lobby to ignore, side-line or dismiss all of the above and offer a techno-fix supposed panacea that comes courtesy of the same companies whose practices are helping to undermine food security and which are fuelling much of the devastation in the first place.

It betrays an ideological adherence to a pro-corporate neoliberal agenda. Instead of attempting to dismiss the issues set out here as being based on 'romantic twaddle', the ramblings of wicked ideologues or the fads and inventions of some notional 'green blob' red in tooth and claw that hates humanity, science and freedom of choice (all of which have been levelled at critics), it would be better to acknowledge the issues described here and work to address them and challenge the practices that fuel them.

The pro-GMO lobby is fond of trying to discredit its critics and engages in pious, emotive rhetoric. They often ask them: "What are you doing to save the lives of millions?"

The question for them is: 'What are you?'

Colin Todhunter is an extensively published independent writer and former social policy researcher based in the UK and India. Twitter: twitter.com/colin_todhunter

This article was originally published on Colin's blog page.