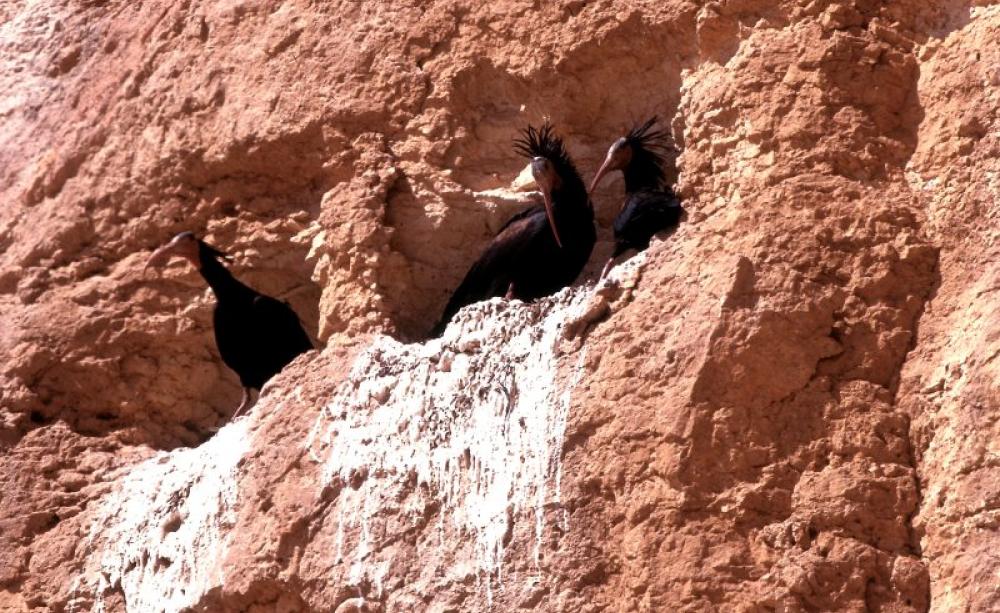 A pair of Northern Bald Ibis engaged in courtship at their nest in the Palmyra desert the year of the rediscovery (2002). Photo: Gianluca Serra.

Reports that Syria's iconic Northern Bald Ibis colony is endangered by IS's capture of Palmyra are mistaken, writes Gianluca Serra. The species is already extinct as a breeding population for reasons unconnected with IS. The war that is destroying Syria came only as the last straw for a long-dwindling species whose plight the world chose to ignore.

The Northern Bald Ibis vanished from the wild as a breeding species due to known threats along the migratory route that have nothing to do with recent IS capture of Palmyra.

A few days ago the BBC reported that the capture of Palmyra by Islamic State (IS) threatens to propel the oriental population of Northern Bald Ibis (Geronticus eremita) into extinction. Sadly they are wrong - because sadly this iconic and unique population already went extinct in Syria a few months ago.

The Northern Bald Ibis vanished from the wild as a breeding species due to known threats along the migratory route, including hunting and habitat degradation. One of our tagged birds, named Julia, was shot in northern Saudi Arabia in 2009.

Three birds, including Zenobia, had been observed at the wintering site in Ethiopia during winter 2013-14, but only she came back to Palmyra in spring 2014, alone for the second year in a row. That made 2014 the last year she was seen at the Palmyra breeding site.

So this year, for the first time in millennia the Bedouin nomads of the Palmyra desert saw no Northern Bald Ibis in late February, at the beginning of the spring, as I was informed by my contacts in Palmyra. The bearded and black-clothed extremists were only the unaware funereal witnesses of the ibis's absence.

Palmyra, my second home for 10 years, has in fact enjoyed a couple of years of relative peace, following the crushing of local protests by Government forces in 2012. But some days ago communications with people in Palmyra suddenly were interrupted due to the capture of Palmyra by IS - leaving me in great anguish for the fate of colleagues, friends and companions.

Certainly the arrival of IS could have turned into a threat for the endangered ibis, had it occurred while they were still around - and especially if their occurrence and associated risks were advertised on mainstream media worldwide as it has been over these last few days.

Surely the bearded fanatics would have been tempted to give the coup de grace to the bald bird colony in their quest for media glory - notwithstanding the views of numerous Islamic scholars that all Muslims have a duty to protect endangered species, and the bird's ancient role as guide to desert pilgrims.

In addition the news of a reward to find Zenobia, mentioned by the same BBC article, seems quite extravagant, not to say totally impractical and of uncertain usefulness. If by any chance Zenobia is still alive within the migratory range, encompassing 3,200 km between western Arabia and Eastern Africa (and I really doubt this), are we encouraging people to trap her?

We are currently experiencing what has been called the sixth wave of mass extinction on the planet. Species of life forms are estimated to become extinct in the order of hundreds every year. Most of them are not known by science - and never will be.

The extinction of the oriental population of Northern Bald Ibis from its native range (Middle East and Eastern Africa) is an irreversible loss for the ecosystems of the Syrian steppe and of the Ethiopian highlands. It is also a permanent loss for the cultural heritage of the Middle East where the bird had been contemplated with awe by successions of civilizations through the millennia.

The few surviving birds in question were the last living descendants of those revered by the ancient pharaohs. The bald ibis is in fact unmistakably represented in hieroglyphs from ancient Egypt dated thousands of years ago, symbolizing the afterworld divinity Akh (see photo, above right).

It is also mentioned in the Old Testament as a messenger of fertility, and was regarded as a guide for haj pilgrims bound to Holy Makah by Muslim communities of Southern Anatolia.

Declaring a species extinct in the wild can require years. The same relict colony of Northern Bald Ibis in question, according to the ornithological literature, should have not existed at all. Its oriental population was declared extinct from the Syrian desert around the 1990s, as no bird had been sighted there since the early 1930s. That is why the news of their rediscovery in 2002 made headlines worldwide.

But this time it seems that the extinction of the Oriental Bald Ibis from the Middle East is really turning into something awfully true. Surely the bird is now extinct in Syria as a breeding species with the non return of Zenobia. The only hope for the species - and a slim one at that - is that a few immature birds may still survive somewhere between western Saudi Arabia and Ethiopia.

Reduced to only seven individuals in 2002 (when they were rediscovered) and breeding in a then politically highly secretive and paranoid country like Syria, undoubtedly only a miracle would have enabled to prevent the extinction of this long-range migrant, travelling twice a year across 10 countries among the most difficult to work within.

And yet during the first years soon after the discovery the miracle seemed almost to take form thanks to the enthusiasm and passion of few dedicated individuals, including Syria's First Lady.

In the end despite its cultural relevance at regional level, the strenuous and misadventurous efforts taken along ten years in Palmyra and the mobilization of the upper circles in Damascus, the extinction of this unique and iconic population could not be prevented due to a complex combination of reasons.

Certainly the fact that the species is included in the Western Paleartic Bird Guide (together with all other species of birds occurring in Europe), that it is listed as Critically Endangered in the IUCN Red List, listed among the 100 most endangered species in the world and among the top 100 most Evolutionary Distinct and Globally Endangered species were not regarded as sufficient reasons by international conservation organizations to raise to the challenge with the required energy, strategic approach and determination.

The onset of the war in 2011 appeared as the classic straw that broke the camel's back. At that time the adult population was reduced to only two individuals. And the emergency action plan I had proposed two years earlier had just remained on paper. At that moment, in 2011, the fate of the ancient guide of haj pilgrims seemed to me already determined.

Coverage of the war in Syria

It is a fact that the coverage of the war in Syria by international mainstream media has been so far very poor. Partly because it is intrinsically very challenging to get reliable information from a country that is gripped in a brutal war.

Also because media tends to publish what can best attract the attention of the average reader. After four years of intense war, readers have become sadly addicted to the daily toll of human life taken either by the barrel bombs dropped by the loyalist army, or by the rebels or by the invading army of fanatics.

This last week international media have fully covered the fall of iconic Palmyra under the control of IS. With the consequent voiced concern for the safety of the unique UNESCO Heritage site.

My colleague archaeologist Alberto Savioli, who worked with me in Palmyra and excavated at several sites in Syria in a long time, maintains in a post he wrote (in Italian) that despite his deep love for the ruins he could not avoid but to observe that far too much emphasis was placed on the concern for the cultural heritage. Without at the same time expressing respectfully the concern for the civilians of Palmyra threatened by IS invasion.

Now comes my turn, in my position as naturalist and champion of an ex-endangered bird. After reading the mentioned news from the BBC web site, I must endorse my archaeological colleague's views - at this tragic turn it seems quite out of place to turn abruptly the attention from the intense sufferance and loss of human life to the threats for the cultural or natural heritage.

But I also have to add that the BBC's news story was fundamentally incorrect as it was clearly based on a non updated source.

I am not a supporter of the bearded extremists but let's not charge IS with responsibility for the demise of the Oriental Bald Ibis. They bear already the burden of enough atrocities.

Gianluca Serra has been engaged in front line biodiversity conservation as a researcher, civil servant, practitioner and activist during the past two decades internationally, on the five continents. During 2000-2011 he has worked in Palmyra, Syria, under various umbrellas (UN, EU, NGOs, volunteer). He assisted the Syrian Government in prompting biodiversity conservation in the country and in establishing the first protected areas. He led the discovery of the colony in 2002 under a UN-FAO/Italian Cooperation project, and coordinated the protection and research efforts, while training local and Government staff, up to the onset of the war.

The author expresses his deep appreciation of all who assisted with the conservation of the Northern Bald Ibis, including Palmyreans, other Syrians, and foreigners.

More information: A photographic and technical booklet about the 10-year ibis conservation saga is about to be published at thelastflight.org (free download). A non-fiction narrative book about the same subject will be also published soon at salaamhasreturned.org.