Britain's dairy crisis - we must account for real costs, and for true value 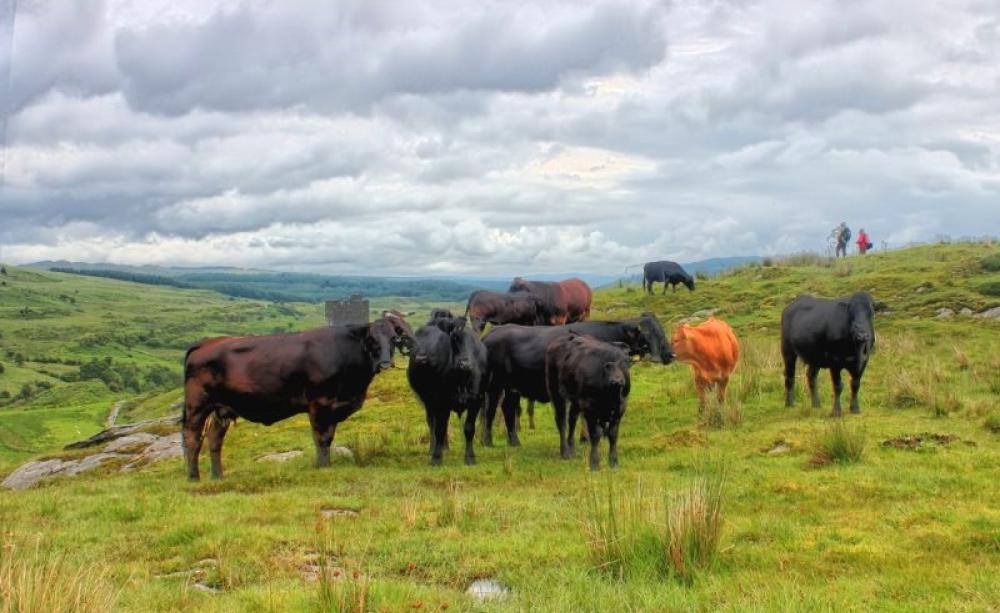 Cows near Dolwyddelan Castle in the Conwy Valley, Wales. Photo: George Frost / Gelephoto via Flickr (CC BY-NC-SA).
The UK dairy industry is in crisis, writes Megan Perry, with falling prices forcing many farmers out of business. Smaller, more sustainable farms have been the worst casualties, while the large, intensive producers survive. We must ditch market-driven 'survival of the fittest' attitudes - and recognise both the real costs of intensification, and the true value of traditional farming.

Instead of pushing for more intensification and free trade, and allowing small farms to fall by the wayside in the process, we need better regulation, cooperation amongst farmers and true cost accounting.

It costs farmers around 30p-32p / litre to produce milk, but many have been earning little more than 20p/litre.

Half of Britain's dairy farms have gone out of business during the past ten years, and many of these have been small family enterprises. As winter approaches and feed and bedding costs begin to rise fears are growing that even more will go under.

The loss of these farms represents a loss of knowledge, skills and jobs, as well as the disappearance of the custodians of our countryside. The impact of this stretches much farther than the farm gate, as SFT director Patrick Holden's Observer blog explains.

And it is not just farmers who are suffering. There are now just 9,000 milkmen left in Britain. In 1980, British households had 89% of their milk delivered by milkmen. By 2013 this figure had dropped to 3.2%.

Following farmer protests and hard negotiation from the NFU and from David Handley of Farmers for Action supermarkets have gradually bowed to pressure. Asda, Aldi, Lidl and Morrisons have all put minimum prices in place for liquid milk.

Tesco and Morrisons have pledged a premium price for milk used in cheese. But these prices are still low, barely covering the cost of production, and there is no guarantee that dairy processors will pass this extra income on to producers.

Environment Secretary Elizabeth Truss has urged action to improve labelling, promote British dairy and relax CAP subsidy checks, but the government has largely seen the crisis as a problem for the industry to handle and has avoided intervening directly.

Decisions in Brussels are more important than decisions in Britain these days, and amidst major protests from thousands of farmers (including contingents from Britain), EU ministers announced a €500 million aid package, £26 million of which is to go to UK producers.

Instead of pushing for more intensification and free trade, and allowing small farms to fall by the wayside in the process, we need better regulation, cooperation amongst farmers and true cost accounting.

The Milk Marketing Board (MMB), established in the 1930s, guaranteed a fair price for milk producers, regardless of the international market. This protected the small farms now at the mercy of individual processors and supermarkets, and gave the next generation a sense of security, encouraging them to enter the industry.

But it was widely disliked by larger farms, which saw it as a monopoly preventing expansion, and many initially welcomed its abolition in 1994. However, the loss of the MMB became what Zoe Williams describes as "One of those Thatcher depth charges, destined to detonate 30 years down the line."

With no board to maintain prices, and no one to support individual farms facing price negotiations with multi-national corporations, milk prices fell by 28% between 1994 and 2010. Farmers in more remote regions now also face higher tanker collection charges, whereas the MMB price for milk collection was the same for all.

With the loss of the MMB, dairy farmers are now highly vulnerable to global free trade. Britain is only 81% self-sufficient in dairy produce, so it may seem strange that farmers are going out of business. But with access to global milk supplies and deregulated prices, retailers can source dairy products from wherever they are cheapest. Britain imported 132 million litres of milk in 2013. This means British farmers must accept lower prices in order to compete.

Market fluctuations and events in other countries directly impact UK farmers. There have been a number of things in the past year exacerbating the current situation:

The problems of free trade and intensification

The current government's answer to the dairy industry's woes is simply to grow food and farming exports by £7 billion. It has remained staunchly non-interventionist, rejecting earlier calls from MPs to extend the remit of the Groceries Code Adjudicator to provide better protection to dairy farmers.

But it has welcomed the European aid package, with £26 million to be given to farmers. Distribution of the money, however, is based on how much milk a farm produces. So, the bigger the farm, the more aid it receives.

As smaller farms have dropped out of the market many others have filled their void, growing bigger and more intensive. In 1996 the average dairy herd size in England was just 78 cows; by 2013 around 10% of cows were kept in holdings of 500 or more. Holdings that keep more than 1,000 cows are now on the rise. Average milk yield has also increased by almost 14% in the past 10 years to 7,717 litres per cow per annum - with many cows on the more intensive farms each producing up to 12,000 litres a year.

Leaders in the industry may think this is simply a case of survival of the fittest, but what is forgotten is that the strongest and biggest are not necessarily the 'fittest' in the long term. Increasing size and intensity cuts overheads and can increase profitability, but it tends to sacrifice sustainability. Very big is not very beautiful in the dairy industry.

First, there is animal welfare, with cows kept indoors for long periods of time, or in some cases continuously, never going outside or grazing grass during their lactation. Cows in these systems are more likely to get health problems, and with such a high number of cows, and the consequent use of robotic milking parlours, human interaction is minimal and illnesses are not picked up so quickly.

Then there are the environmental issues, with large herds kept indoors producing vast amounts of slurry, emitting more greenhouse gases and ammonia than cows grazing naturally, and polluting waterways. Housed cows are also fed more high protein feeds such as soya, which will likely have been grown on former virgin land in areas such as South America.

So, while a farm may appear to be efficient and sustainable, part of its environmental footprint is out of sight across the world and not included in UK emissions tables.

Finally, there is the issue of food sovereignty. As farms grow in size and export their produce rather than selling it locally, the cultural identity of the farm and its place within the community is lost. People become disconnected with where food comes from and the local economy declines.

How can this be rectified?

If we had true cost accounting in food and farming, these issues would all be included in the cost of production. The wide-ranging benefits of sustainable systems would also be rewarded, making it more profitable to farm sustainably.

These include pastures that sequester carbon and encourage biodiversity, the provision of jobs, the maintenance of cherished landscapes, and an array of human health benefits including less air pollution and meat with higher nutritious value. But without true cost accounting it is hard to differentiate effectively between production methods, and even harder to strengthen sustainable farms financially.

One way round this is through cooperatives, where small farms can work together, pooling resources and acting as one voice when dealing with retailers. Organic Valley Cooperative in the United States, for example, is formed of 1,779 family farms. According to Organic Valley, being a cooperative means it is independent, being "under no obligation to answer to stockholders demanding higher profits year after year."

On a UK level, stronger regulation would protect small farms and reward sustainability. And effective long-term measures, such as tiering subsidies to favour small farms, would help bring about true cost accounting by making these farms financially profitable.

But how can consumers differentiate between different types of milk? There is, of course, organic milk where the production system seeks to address a wide range of issues, but the introduction of an over-arching fair trade label for milk, which integrates both organic and fair trade criteria, would go a long way towards protecting small family farms. Such a label would need to include as a minimum:

The dairy industry is facing significant challenges, but it also has an opportunity for radical change. Instead of pushing for more intensification and free trade, and allowing small farms to fall by the wayside in the process, we need better regulation, cooperation amongst farmers and true cost accounting.

The true value of small dairy farms must be recognised, while the damaging impact of intensification must be accounted for if sustainable dairy farming is to survive in Britain.

Megan Perry was born in Pensford, a village in North Somerset, and grew up in a rural setting surrounded by family members who have a farming or mining background. Because of this, she has always been interested in farming and rural issues.

This article was originally published by the Sustainable Food Trust.