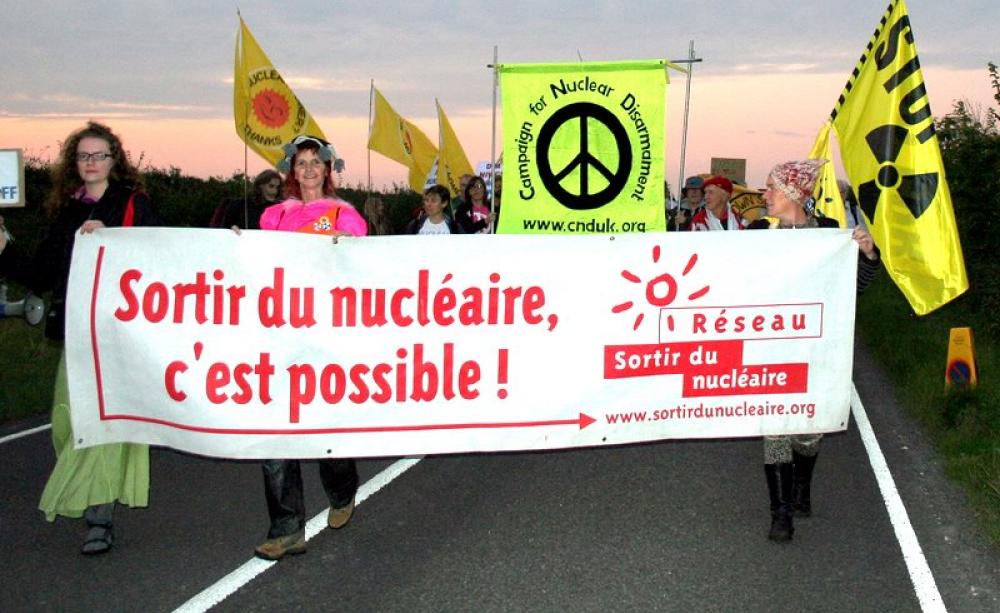 'Getting out of nuclear - we can do it!', reads the banner at this 2011 protest against Hinkley C. French Energy Minister Segolene Royal might just share the opinion. Photo: Campaign for Nuclear Disarmament via Flickr (CC BY).
France's energy minister Ségolène Royal has backed union demands for the EDF's Hinkley C project in Somerset to be re-examined, write Angelique Chrisafis & Chris Johnston - adding that the project must not go ahead if it would 'dry out' funds needed for EDF's renewable energy program.

I think the project should bring supplementary proof that it is well founded and provide assurances that investment in this project is not going to turn aside or dry out investments that need to be made in renewable energy.

The French energy minister, Ségolène Royal, has said that a postponement of the Hinkley Point C nuclear power project was still a possibility.

She also stated that the project must not be allowed to drain funds away from planned investments in renewable energy to bring France towards its 40% green power target.

The comments came in a French television interview on Thursday on the BMFTV channel, in which she was asked whether Hinkley Point would be postponed. (See 9.35 in video)

"It's still under discussion", Royal replied. "There's an agreement between France and Britain, so things should go ahead. But the trade unions are right to ask for the stakes to be re-examined."

Asked if she was in favour of a postponing the £18 billion project, Royal ducked the question and said she would not make rash comments. However, she did not want to "decisively throw the project into question just like that."

Royal continued: "I think the project should bring supplementary proof that it is well founded and provide assurances that investment in this project is not going to turn aside or dry out investments that need to be made in renewable energy."

She then spoke at length of France's ambitions to generate 40% of its electricity from renewable sources, wind in particular, and France's broader ambitions to establish itself as an environmental super-power with global expertise across the gamut of green technologies - all without mentioning nuclear power once.

Her comments fit in with EDF's broader strategy to become a global player in renewable energy. It is already the US's largest wind power developer and is on track to be producing more wind power in the US every year by 2025 than would Hinkley Point C.

EDF, the energy company controlled by the French government, has still not made a firm commitment to build the new nuclear power station. Its board had been expected to make a final investment decision on the project at its next meeting on 11 May, however this is now looking less likely following Royal's pointed intervention.

Also weighing against an immediate decision, EDF's Force Ouvriere (FO) union this week threatened strike action if the company was to hold a meeting to decide on the project before its Annual General Meeting on 12th May.

"If a board meeting is scheduled, we will launch a strike to demand that the Hinkley Point project is delayed", FO union leader Jacky Chorin told Reuters. "Once the strike is on, I could see CGT and CFE-CGC follow, as they are also against the project."

I think the project should bring supplementary proof that it is well founded and provide assurances that investment in this project is not going to turn aside or dry out investments that need to be made in renewable energy.

Last week an EDF board member called for Hinkley Point C to be postponed, in the latest sign of discord at the top of the French energy company over the troubled project. Christian Taxil, an employee director, said a raft of changes to the Somerset reactor scheme agreed over the past three years significantly raised the risk for EDF.

The dissent follows weeks of behind the scenes bickering and theresignation last month of EDF finance director, Thomas Piquemal, despite continual promises from EDF chief executive Jean-Bernard Lévy that the controversial project will go ahead.

EDF has been hit by falling power prices, cost overruns on other projects, and demands to upgrade French nuclear reactors to make them safer. Its Paris-listed shares are down by almost 60% over the past 12 months.

The company is being compelled by the French government to buy the reactors division of Areva, which is also state-controlled.

Areva's European Pressurised Reactor (EPR) technology is slated to be used at Hinkley Point. However, the first power station to use it - which is being built in Finland - is running nine years behind schedule due to problems and cost overruns. The problems had left Areva virtually bankrupt after four years of losses.

Concerns about the EPR technology has also delayed EDF's construction of another EPR reactor at Flamanville, on France's west coast. Its budget has gone from €3bn to €10.5bn and it is running six years late.

Building two new nuclear reactors at Hinkley has been heavily backed by the UK government in order to keep the lights on in Britain. The last of the UK's coal-fired power stations will be closed in 2025.

Simon Taylor, a specialist in nuclear financing and a lecturer at Cambridge University, said last month that the Hinkley project appeared to be "poor value for money" and it would be best if the French government abandoned it.

"It would preserve the rest of the nuclear options in the UK, as it would not cast any doubt on the UK's underlying commitment," he said. "But if the UK cancels the project it could jeopardise all the other projects in the pipeline."

Chris Johnston is a London-based freelance journalist for the Guardian.

This article was originally published by Guardian Environment. This version includes additional reporting by The Ecologist.