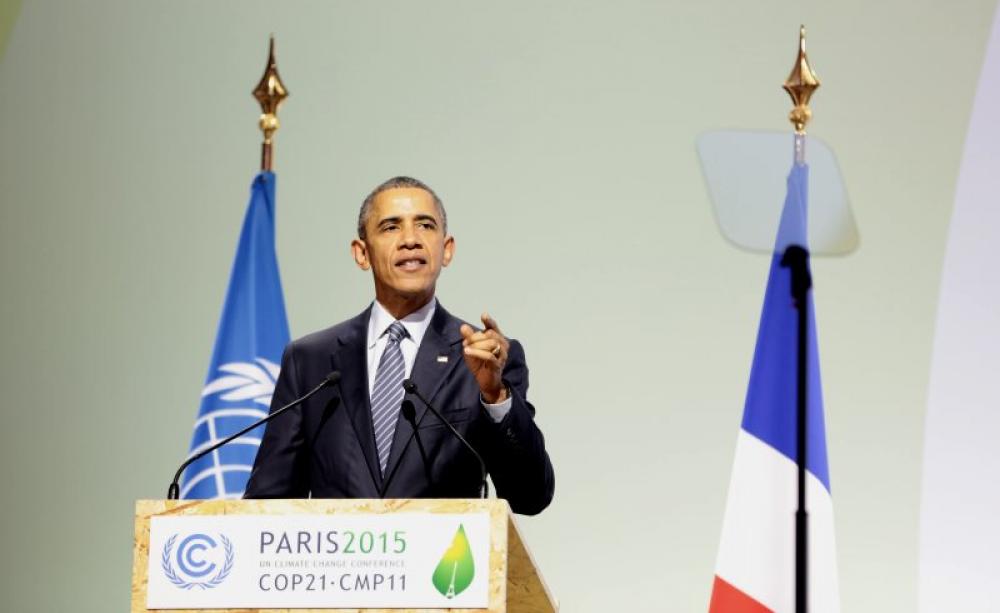 Obama spoke out at the COP21 climate conference. But his officials helped to thwart limits on emissions from international shipping at the IMP this week. Photo: ConexiónCOP Agencia de noticias via Flickr (CC BY).

World leaders are meeting in New York today to sign the Paris Agreement on climate change, write Stephen Buranyi & Oliver Tickell. But the world just failed a big test of its commitment to the Paris targets by deadlocking on IMO proposals to limit emissions from international shipping.

With the fate of the Marshall Islands' proposals on tackling emissions from shipping standing as an objective measure of the future prospects of the Paris Agreement, there's little cause for optimism for the world's climate.

Over 150 world leaders are meeting in New York today to sign the Paris Agreement, negotiated at the COP21 UN climate conference in Paris last December.

But amid the razzmatazz and hyperbolic speeches you would never know the world just failed the first big test of its ability to deliver the Paris Agreement's 1.5C global warming ceiling.

Countries have been meeting this week at the International Maritime Organisation's (IMO) annual marine environment protection meeting in London to debate proposals to limit fast growing emissions from international shipping.

But they failed to take decisive action. Instead countries divided over a proposal that would have the UN body set emissions targets for global shipping as early as 2017 - and any decision was pushed off until the next IMO marine environment protection committee (MEPC) meeting in October this year.

The proposal, submitted by The Marshall Islands and initially backed by Belgium, France, Germany, Morocco, and the Solomon Islands, said it was the "right time" to determine shipping's "fair share" in the fight against climate change.

It's up to the IMO to act because international shipping and aviation are not covered by the Paris Agreement. However the head of the IMO indicated that the group would take up the challenge of GHG emissions from ships during this meeting.

Writing in The Ecologist this week, Labour's Shadow climate minister Barry Gardiner expressed concern that the UK was lukewarm on the Marshall Islands' plan.

But in the event the opposition came from a group of powerful countries including the US, Saudi Arabia and the entire BRIC group who want to delay any concrete emissions targets and instead continue with a plan that focuses on monitoring and evaluating CO2 data before any decisions are made.

The plan to establish a monitoring and data collection plan before making any decision was proposed by the USA last year - and they continue to support the slower approach. The Chinese delegation said it was "too soon" for action. Brazil claimed it was "too complex" to run talks about fair shares in parallel with the data collection work.

The Marshall Islands' proposal, also supported by other countries including Denmark, Italy, Norway, and Sweden, quoted the Paris Agreement at length, and urged the assembled delegates to support its goal of limiting warming to 1.5C. If adopted it would have called on the IMO to select a method to determine the shipping industry's 'share of emissions' by the MEPC meeting in 2017, and apply it the following year.

With the fate of the Marshall Islands' proposals on tackling emissions from shipping standing as an objective measure of the future prospects of the Paris Agreement, there's little cause for optimism for the world's climate.

The IMO itself predicts that emissions from shipping could rise by as much as 250% from 2012 levels by 2050. At 3% of global emissions, the shipping sector currently has a carbon footprint roughly the size of Germany, but at that rate it could grow to equal that of the entire EU.

However a group led by China, Brazil, and Saudi Arabia vociferously opposed him, with Colombia suggesting he was "making decisions in a personal capacity." The suggestion was further put off into a working group meeting next year that would discuss "all the documents and comments today" - effectively delaying the debate for a further year.

The IMO has previously been criticised for failing to take action on shipping emissions, which account for some 3% of the global total. Mr Lim had hoped that the momentum of Paris would carry into this week's meeting and deliver more concrete action.

If the IMO remains unable to deliver action on climate change, the UNFCCC may end up intervening in the discussion to force action. However that would entail much political wrangling - and additional delays the world can ill afford.

Delegates from France, which co-sponsored the Marshall Islands proposal, noted that UNFCCC president Ségolène Royal, France's Energy Secretary, was being given regular updates on the meeting, and warned the assembled delegates that the eyes of the world were on them:

"It is up to this organisation to establish a fair level of effort. If we fail we will be judged impotent."

And sadly, that's just how it looks. And with the fate of the Marshall Islands' proposals on tackling emissions from shipping standing as an objective measure of the future prospects of the Paris Agreement, there's little cause for optimism for the world's climate.

This article is an edited version of one originally published on DeSmog.uk.