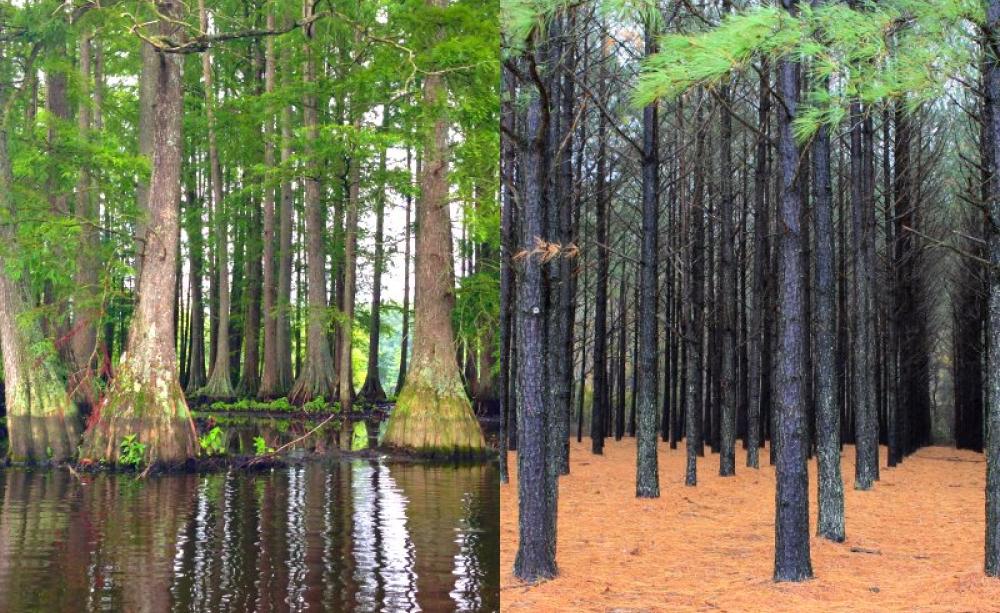 Before and after: natural wetland forest dominated by Swamp cypress, and an industrial plantation of Lolbolly pine. Both photos via Wikimedia Commons (see details on individual photos); amalgamation by The Ecologist (no rights claimed).
This month wood pellet mills in the southern US that supply the UK's Drax power station were awarded 'sustainability' certificates under a voluntary scheme governed entirely by energy companies. The certificates provide no credible guarantee that the fuel does not come from ecologically valuable natural forests and wetlands, clear-cut and replaced by industrial plantations.

Far from holding companies to account, 'sustainability' standards simply allow them to greenwash their activities. Standards themselves are of little importance as long as companies can so easily pay another company for certificates to 'prove' compliance.

In December 2015 the UK Government introduced its long-awaited sustainability and greenhouse gas standards for biomass. Biomass which fails to meet the standards is no longer eligible for subsidies.

This is the Government's answer to growing concerns about the impacts of large-scale biomass electricity on forests and on the climate.

Media reports describing how biodiverse forests in the southern US are being clearcut in part to make wood pellets for UK power stations had questioned the rationale behind renewable energy subsidies going to electricity produced at the expense of forests, and in particular to Drax, the vast coal and biomass fired power station in Yorkshire.

Drax is receiving over £1 million in public subsidies every single day for burning pellets made from 12 million tonnes of wood a year. The power station continues to burn up to 6 million tonnes of coal annually, too.

Virtually all of the wood pellets it burns are imported, and the majority come from the southern US, mostly from the North American Coastal Plain region, which was recognised as a Global Biodiversity Hotspot earlier this year.

Some of Drax's pellets come from clearcut coastal swamp forests

US conservation NGOs have provided clear evidence that some of Drax's pellets are coming from the clearcutting of coastal swamp forests, which are one of the most biodiverse temperate forest and aquatic habitats in the world. Needless to say, burning wood from clearcut forests is the very opposite of low-carbon.

The standards have had one dubious 'success' though: judging by the replies from MPs to letters protesting against Drax's subsidies, passed on to Biofuelwatch by constituents, the standards have helped convince the majority of MPs that problems with forest destruction and high carbon emissions for biomass electricity have now been taken care of.

Soon after the biomass standards were published, Biofuelwatch published a detailed analysis of all that was wrong with them. Amongst other things, the greenhouse gas standards ignore all of the carbon emissions associated with logging as well as burning biomass, and there is no credible independent system for verifying 'sustainability' claims made by companies.

According to official Guidance, the Sustainable Biomass Partnership (SBP) is the only certification scheme which can 'prove' 100% that the sustainability standards are being met.

Drax pays for sustainability certification from the Sustainable Biomass Partnership

SBP certification for Drax's own pellet production in the US exposes just how meaningless the sustainability standards are, and shows why Drax has had no reason to worry about them.

Two SBP certificates were granted on the first of August and applies to two pellet mills built by Drax in Louisiana and Mississippi. Drax has also applied for a more far-reaching 'chain of custody' SBP certificate which could result in all of its biomass electricity being automatically deemed sustainable in the UK, however the latter is still pending.

NGO evidence showing that pellets are being made from clearcut wetland forests relates to Enviva, Drax's main supplier, rather than Drax's own pellet mills, where Drax claims to be mainly using wood from pine plantations.

This may well be true, at least for now, though it doesn't make the pellets sustainable. Across the southern US, industrial pine plantations continue to be expanded at the expense of biodiverse forests. Forest campaigners from the Dogwood Alliance in the US described the plantations that Drax is relying on for its wood:

"Orderly rows as far as they eye can see like a cornfield, regular spraying of fertilizers and herbicides, and plantations are so quiet because they're almost devoid of wildlife. Before they can grow into majestic trees, the heavy machinery chops them down like mowing a lawn."

Cutting down and burning a plantation tree still results in high carbon emissions, although the SBP does not even look at climate impacts when assessing 'sustainability'. SBP certification sheds little light on Drax's practices and cannot ensure that the company won't use wood from biodiverse forests in future.

An initiative made up entirely of energy companies

The SBP was established in 2013 as a successor to the Initiative Wood Pellet Buyers, which had helped drive the emergence and expansion of the global wood pellet trade. It is made up entirely of energy companies.

Like other voluntary certification schemes, the SBP relies on external 'certifiers'. These are firms which offer their services to a variety of companies seeking different types of certification under different schemes and standards. This allows Drax to claim: "The SBP Board has no involvement in the certification decision process and has no opportunity to influence its outcome."

In fact, there is no need for the SBP Board (chaired by Drax's CEO) to intervene in a particular certification decision: they were able to ensure their desired outcomes by setting the standards, determining what type and level of investigations and verification are required, and devised the appeals procedure.

The appeals procedure is only open to pellet producers, energy companies and prospective certifiers who have had an adverse decision against them, but not to civil society groups. Although NGOs could use a separate complaints procedure, that is far weaker and such complaints can be dealt with SBP staff members only.

Companies applying for a certificate choose their own certifiers amongst the list of SBP-approved companies and pay them for their services. This creates a strong incentive for certifiers to provide the desired service to their clients, and to be biased in favour of granting certificates. This is a generic problem of voluntary certification schemes.

Drax's SBP certifiers: A company with a track-record of granting controversial certificates

The certification company chosen by Drax is SCS Global Services ('SCS'), and it is no stranger to controversy. Forest Stewardship Council (FSC) certificates awarded as a result of SCS assessments include:

SBP certification is even less onerous than FSC certification. SCS spent a total of just seven hours inspecting logging operations across two overlapping areas from which Drax's pellet mills source wood, each with 3.9 million hectares of forest. The SCS reports largely summarise 'supply base' reports written by a Drax director.

A simple web search casts doubt on some of the claims accepted by SCS: For example, the certification report states that there are no IUCN Red List species (i.e. endangered or threatened species) in the wider sourcing region. In fact, there are 10 Red List species in Louisiana alone, including the Louisiana Pine Snake which depends on Longleaf pine forests.

Drax's own report shows that Longleaf pine forms part of the wood mix used by both pellet mills. According to IUCN, "intensive pine silviculture" (pine plantations) is one of two key threats to the species.

The fact that such a questionable SBP certificate has ensured that all of the pellets produced by Drax will be classed as 'sustainable' and thus worthy of subsidies in the UK illustrates the true nature of the Government's sustainability standards.

Far from holding any companies to account, 'sustainability' standards simply allow them to greenwash their activities. Standards themselves are of little importance as long as companies can so easily pay another company for providing them with certificates to 'prove' compliance with those standards.

This is yet more evidence to back up the argument made in a declaration by 132 civil society groups that biomass sustainability standards cannot protect forests, and that biomass must be excluded from renewable electricity subsidies.

Almuth Ernsting is co-Director of Biofuelwatch.

Editor's note: Following representations from Drax and SCS Global Services this article was edited on 25th August 2016 to clarify certain contentious issues and provide links to information sources which had been lost from the original owing to a technical error.