EU must not re-approve glyphosate based on flawed EFSA study 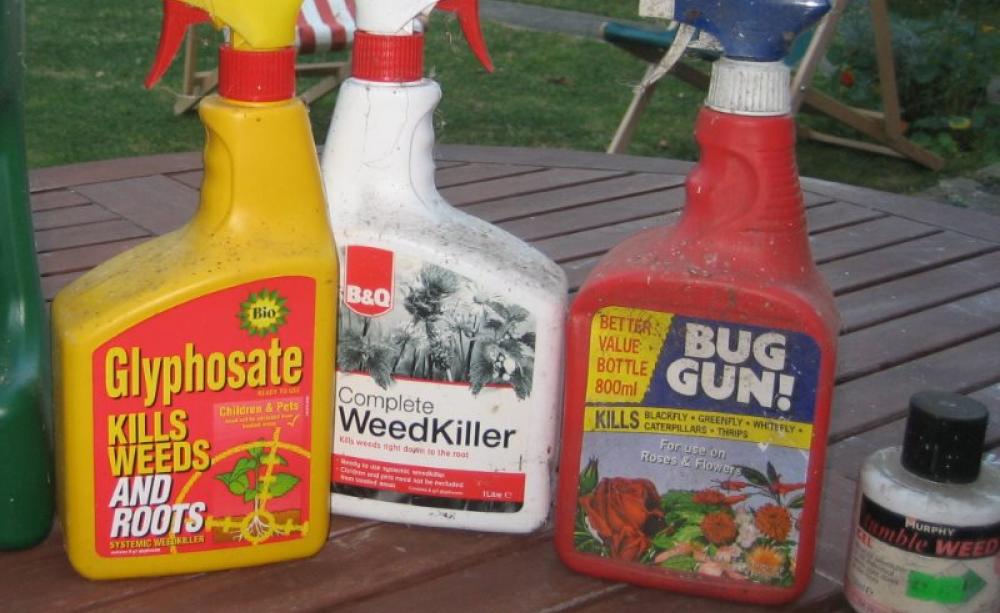 Glyphosate, the 'probable carcinogen' in your shed. But wil the EU re-licence it based on EFSA's deeply flawed, pro-industry scientific assessment? Photo: Kit Reynolds via Flickr (CC BY).
The European Commission must not re-approve the 'probably carcinogenic' weedkiller glyphosate so long as its assessment is based on secret industry studies, actual products are not investigated, and in the absence of scientific criteria for endocrine disruption, write 66 MEPs in this Open Letter to Commissioner Andriukaitis, in charge of health and food safety.

We, Members of the European Parliament from different political groups, are very concerned by the ongoing re-approval process of glyphosate, the active substance in the most widely used herbicide.

We currently witness a major scientific controversy between the European Food Safety Agency (EFSA) and the International Agency for Research on Cancer of the World Health Organisation (IARC) with regard to the carcinogenicity of glyphosate.

While IARC had concluded in March 2015 that glyphosate is a probable human carcinogen (category 2A), the EFSA peer review, based on the renewal assessment report by the rapporteur Member State (BfR), concluded in November 2015 that glyphosate is "unlikely to pose a carcinogenic hazard to humans and the evidence does not support classification with regard to its carcinogenic potential". Proper classification is crucial as it entails important regulatory consequences.

We do not have the necessary technical expertise to properly assess the detailed scientific arguments brought forward by either side with regard to the classification of glyphosate. However, we consider that there are some overarching problems that urgently need to be addressed.

According to EFSA, there are two key issues that explain the different conclusions:
a) the number of studies assessed - published vs. unpublished;
b) the object of the studies assessed - active substance vs. plant protection products.

With regard to the first point, EFSA stated that its "evaluation considered a large body of evidence, including a number of studies not assessed by the IARC which is one of the reasons for reaching different conclusions" (EFSA news story, 12 November 2015).

In a detailed response to an open letter sent by MEPs and MPs on 20 October 2015, EFSA gives further indications: "Based on a comprehensive genotoxicity data package on the active substance glyphosate, and considering a weight of evidence approach on all available data, it is concluded that glyphosate is unlikely to be genotoxic in vivo and does not require hazard classification regarding mutagenicity according to the CLP Regulation.

"It is noted that unpublished studies that were the core basis of the peer review evaluation were not available to the IARC experts as reported in the IARC monograph 112 on glyphosate (IARC, 2015)."

We are deeply concerned about such an intransparent weight of evidence approach, based on which positive findings (in published studies) are outweighed by referring to negative findings (in unpublished studies). This does not create a level playing field, does not allow for independent scrutiny, and as a result inevitably questions the work of EFSA.

We therefore call on you to demand the publication of all the studies which were used by the BfR and EFSA to assess glyphosate and not only their summaries, including names of the authors and declarations of conflicts of interests, so that these studies can be independently assessed.

No wriggle-room for EFSA - it must evaluate a 'representative product'

With regard to the second point, EFSA has recently gone on record that its task would be to assess the active substance, not the formulated product (Le Huffington Post, 21 January 2016). While it is correct that the authorisation of the diverse formulated plant protection products is the responsibility of Member States, EFSA also has key obligations in that regard.

According to Article 4(5) of Regulation (EC) No 1107/2009, for approval of an active substance, the approval criteria shall be deemed to be satisfied where this has been established with respect to one or more representative uses of at least one plant protection product containing that active substance.

It is thus clear that EFSA also needs to assess at least one plant protection product against the approval criteria, and in that respect pay full attention to all relevant data, including epidemiological one. The EFSA statement referred to above raises important questions with regard to the compliance of EFSA's peer review with Article 4(5).

Moreover, EFSA admitted that a number of published studies performed with glyphosate based formulations of unknown composition gave positive results when tested in vitro and in vivo. EFSA furthermore acknowledged that POE-tallowamine is one of the co-formulants that is known to be used in some glyphosate-based formulations, and that

"this co-formulant has been shown to be more toxic than the active substance glyphosate on several toxicological endpoints, namely acute, short term, reproductive and developmental toxicity, further to equivocal evidence of DNA damage in vitro at high doses".

However, according to EFSA, POE-tallowamine is not present in the representative formulation.

Member states are not properly applying the Regulation either

We are very concerned that an applicant may get approval of an active substance based on one plant protection product alone, especially when many different formulations are placed on the market, most likely choosing a formulation with the least harmful co-formulants, despite the wide use of such highly problematic co-formulants such as POE-tallowamine.

EFSA concluded that the toxicity of formulations and in particular their genotoxic potential should be further considered and addressed, leaving that task to Member States.

However, given the hazards shown by formulations, and in particular by POE-tallowamine, and without prejudice to our concerns with regard to the carcinogenic properties of glyphosate as found by IARC, it seems that Member States are not properly applying Article 4(3) of Regulation (EC) No 1107/2009.

Finally, we are greatly concerned that glyphosate may be reapproved prior to the adoption of scientific criteria for the determination of endocrine disrupters. Glyphosate-based formulations have been found to be endocrine disrupters in human cell lines (see Gasnier et al., Toxicology, 21 August 2009).

In the absence of proper scientific criteria, EFSA only assessed glyphosate against the interim criteria for endocrine disrupters, yet stated that an endocrine-mediated mode of action could not be ruled out in the context of possible adverse effects on reproduction

As you know, the Commission was obliged to present scientific criteria by 14 December 2013, but failed to do so. An analogous obligation is laid down in the Biocides Regulation EU (No) 528/2012.

In this context, the General Court declared on 16 December 2015 that the Commission has breached EU law by failing to adopt delegated acts as regards the specification of the scientific criteria for the determination of the endocrine-disrupting properties.

In conclusion, we urge you to refrain from re-approving glyphosate as long as

Michèle Rivasi is Vice-Chair of the Greens / EFA Group in the European Parliament.

This article was originally published as an Open Letter to Commissioner Andriukaitis from Michèle Rivasi and the co-signatories below, all Members of the European Parliament.