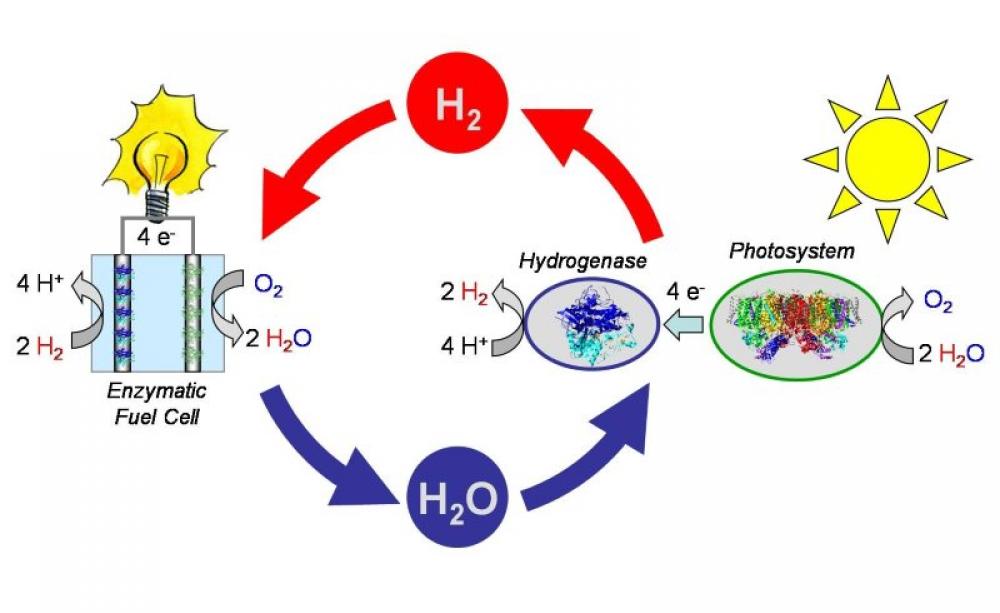 A schematic of how hydrogenase catalyst can be used reversibly to produce hydrogen, and 'burn' it in a fuel cell. Image: Department of Microbiology, Faculty of Biology, Humboldt University, Berlin.
Advanced new catalysts are poised to stimulate a clean energy revolution, writes Tim Radford. An organic replacement for the precious metal platinum would allow surplus electricity to be cheaply converted into hydrogen fuel, then burnt in low cost fuel cells to propel 'green' vehicles and generate power on demand.

The material is comparable to platinum, except it's truly renewable. You don't need to mine it; you can create it at room temperature on a massive scale using fermentation. It's biodegradable. It's a green process to make a high-end sustainable material.

Molecular biology has been used by scientists in the US to make a catalyst that makes it easier to split water into hydrogen and oxygen, and back again.

In China, chemists have announced a nanofabric - a catalyst put together atoms at a time - that could begin the process of turning the greenhouse gas carbon dioxide back into fuel.

And with what seems like perfect timing, a new technological venture in Switzerland hopes to be the first commercial plant to harvest carbon dioxide from the air.

The first two propositions are still in the laboratory stage, and the third has yet to prove its viability. But the laboratory advances keep alive the hopes of the ultimate in energy recycling.

In the first process, water provides the raw material for surplus electricity - ideally from renewable sources like wind and solar - to produce hydrogen and oxygen, with the catalyst increasing the efficiency of the process. The same catalyst can then be used to recombine the two in a fuel cell and produce electricity once again, for example to propel a vehicle, producing nothing but water as exhaust.

In the second process, a the CO2 released from fossil fuel burning could be captured, chemically combined with the renewable hydrogen, and turned back into a 'green' fuel.

The hydrogen fuel cell long ago began to deliver energy for manned space flight, and is already in use in urban public transport, with a platinum catalyst fusing hydrogen fuel and oxygen from the air to release electrical energy and water.

But platinum is rare and costly to mine. And hydrogen, although the commonest element in the universe, is tricky stuff to handle in bulk.

Trevor Douglas, professor of chemistry at the University of Indiana, US, and colleagues report in Nature Chemistry that they exploited the capacity of a virus to self-assemble genetic building blocks and incorporate a very sensitive enzyme called hydrogenase that can absorb protons and spit out hydrogen gas. They have dubbed it P22-Hyd.

"The end result is a virus-like particle that behaves the same as a highly sophisticated material that catalyses the production of hydrogen", Professor Douglas explains. "The material is comparable to platinum, except that it's truly renewable. You don't need to mine it; you can create it at room temperature on a massive scale using fermentation technology. It's biodegradable. It's a very green process to make a high-end sustainable material."

So far, the scientists have established what could emerge, and such research is just another example of the ingenuity and imagination that engineers and chemists are demonstrating in a host of attempts to find new ways to confront the global energy crisis precipitated by climate change, which is itself a consequence of the prodigal combustion of fossil fuels.

Climate change is driven by the remorseless build-up in the atmosphere of carbon dioxide released by fossil fuel combustion - and chemists have already proposed that the greenhouse gas could be recycled.

Attempts to capture carbon have not been promising so far, and the technology required to turn carbon dioxide back into something that burns is still in its infancy.

But Shan Gao and research colleagues at the Hefei National Laboratory for Physics at the Microscale, China, report in Nature that they have found a way to arrange the atomic structure of cobalt and cobalt oxide to turn the metal into something that can more efficiently 'reduce' carbon dioxide into the raw material for high-value chemicals - one of which would be liquid fuel.

This would enable hydrogen gas - ideally produced by the process described above from renewable energy sources - to be synthesised into methane, methanol or other organic fuels that could then be burnt for energy with near-zero carbon emissions.

Importantly, the new arrangement of cobalt and cobalt oxide is in layers only four atoms thick, and it is this exquisitely formed structure that enables the process of reduction to begin at low energies - which in turn could make it a practical tool for conversion of large quantities of captured carbon dioxide into something of value.

Right now, what is billed as the world's first commercial technology to filter carbon dioxide from the air expects only to retrieve 900 tonnes of the greenhouse gas a year - equivalent to the emissions from the exhausts of 200 cars - and sell it to greenhouses to fertilise commercial crops, or to the soft drinks market to provide the fizz in a soda.

But the captured gas could ultimately be available as a raw material for fuel, according to Dominique Kronenberg, chief operating officer of Swiss-based enterprise Climeworks AG, which is working on commercial demonstration of atmospheric CO2 capture technology:

"We have a fundamental belief that things can't go on the way they've been going on, with more and more oil being pumped out of the ground. There will be an end sooner or later."

Additional reporting by The Ecologist.