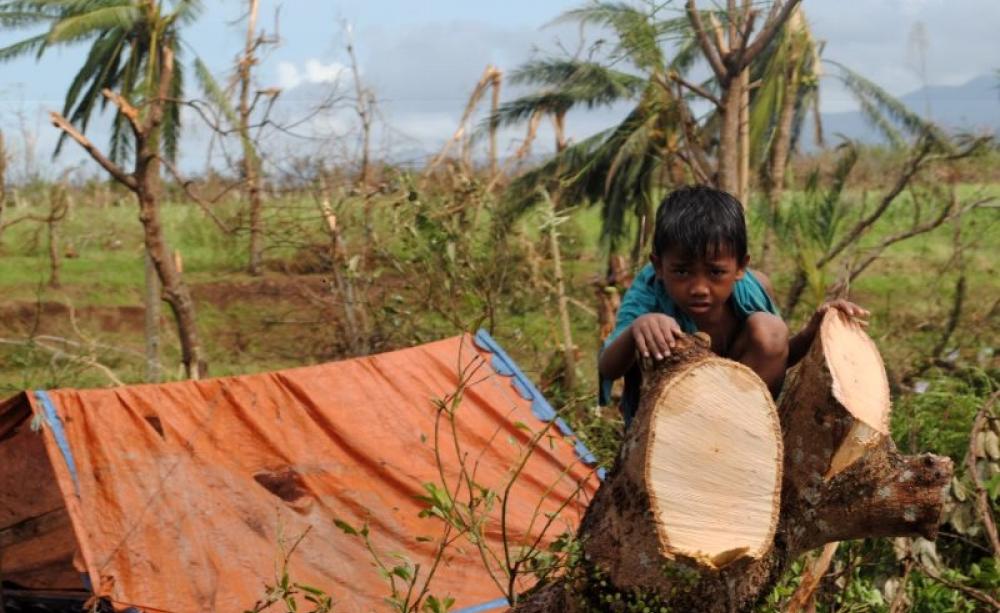 A survivor of Typhoon Haiyan, Leyte, Philippines, 10th November 2013. Photo: Arlynn Aquino / EU ECHO via Flickr (CC BY-NC-ND).
The Philippines is taking a huge leap forward in the climate wars, writes Ellen Baker, with the world's 'top 50' energy giants standing accused of violating international human rights law as a result of their fossil fuel production. This is the first such investigation ever to take place anywhere in the world - and it just opened up a whole new front of corporate vulnerability.

Taking on the carbon majors in this way could trigger copycat investigations, continuing the wave of legal action for the climate. It expands what the world thinks is possible in the name of environmental justice.

Amid the noise of COP21, the Philippines took historic action for human rights and the environment.

The island nation is launching the first ever formal human rights investigation into 50 of the world's biggest coal, oil and gas corporations.

In September, a complaint was submitted to the Filipino government's independent Commission on Human Rights (CHR). It was led by Greenpeace Southeast Asia and the Philippine Rural Construction Movement and backed by the signatures of 1,288 Filipinos.

The complaint said these corporations are intensifying climate change and its impacts with their high-carbon activities - and violating human rights law in the process.

The complaint asked the CHR to assess whether these companies are breaking human rights law through their impact on the climate. The CHR accepted the request, and the investigation was launched during COP21 on 10th December 2015 - Human Rights Day.

It will be the first time a formal human rights investigation has been undertaken against industry on the basis of climate impact. Environmental and financial law is being used already to regulate companies' behaviour and the toll it takes on the climate. But the use of human rights violations as a legal basis for complaint is an entirely new approach - and it's exciting.

Until now, legal cases that demand environmental accountability have generally been brought against state authorities. Taking on the 'untouchable' corporations is seen to be a taller order.

But for the Philippines and the fossil fuel giants, this may turn out to be a case of David and Goliath. The Philippines is at the mercy of some of the world's most extreme weather, leaving it particularly vulnerable to climate change.

Up to ten cyclones hit annually, claiming thousands of lives, flattening the infrastructure and battering the economy. Most recently, super typhoon Haiyan, one of the strongest tropical cyclones ever recorded, killed over 6,000 people when it hit in 2013. Its financial costs were estimated at over $13bn.

On a day-to-day basis, housing, farming and fishing are left in jeopardy as weather patterns morph and the shoreline creeps inwards.

Finding a guilty party (actually, 50 of them)

Climate change is no longer a theory. It's the single biggest threat to our future, a process of cause and effect unfolding before our eyes. But as with all ills, addressing the problem means finding a guilty party.

The complaint makes a direct link between carbon-intensive industry, climate change and extreme weather. It draws on Richard Heede's 2013 study, which aggregates and ranks the historical emissions of fossil fuel and cement producers. Heede calls these companies carbon majors.

Taking on the carbon majors in this way could trigger copycat investigations, continuing the wave of legal action for the climate. It expands what the world thinks is possible in the name of environmental justice.

To give you an idea of scale, the biggest offenders, these 50 investor-owned carbon majors, were responsible for over a fifth of global industrial emissions in 2010.

Industrial emissions are accelerating climate change and intensifying extreme weather events. The increasing frequency and strength of tropical storms, and how they deprive Filipinos of the 'exercise' of their human rights, can therefore be blamed, at least partially, on polluting corporations.

We know emissions cause climate change. Until recently, assigning specific blame - establishing whose fault it is - wasn't possible. But science is racing towards sure ways to clarify 'whodunnit' - and to what extent they did it. And the law needs to keep pace.

"Companies fear nothing more than a lawsuit", says Gregory Regaignon of the UK's Business and Human Rights Resource Centre. As Volkswagen painfully found out, overlooking environmental issues can dent the reputation of your company, your industry, even your country.

Pointing the finger with the weight of law and science behind you is powerful. Regardless of the outcome, complaints filed against your name create consumer cynicism - particularly, as it turns out, when the complaint is about threats posed to health, finances and the planet. It's a good way to push socio-environmental concerns further up a company's agenda.

Can industry afford to play dirty (energy) any longer?

Bank of England Governor Mark Carney has warned that it will soon become impossible for any business not to take climate risk into account. For the moment, however, many carbon majors continue to invest as though they are unaware of the 1.5 degree goal.

Legal cases are starting to emerge that indicate an appetite to point the finger and that citizens are demanding legal remedies - and more importantly, behavioural and procedural changes. Consider the Urgenda case, brought by Dutch citizens against their government to improve national climate efforts, or the case of the Lahore farmer in Pakistan, who demanded the government started to implement their climate law.

This is why the human rights basis of the Philippines investigation is so significant. Lawyers are already working to hold companies accountable under finance and environment laws, but the human rights angle is new.

Never before has this human rights commission conducted an investigation into an environmental matter. Never before have accusations of human rights violations been levelled against private entities - and certainly not on the basis of greenhouse gas emissions. And never before has Heede's study been called upon as the evidential basis of a complaint.

The petitioners want to see the carbon majors make concrete plans to start complying with human rights law, starting with including human rights in their corporate reporting. Further afield, they want to see the countries where the companies are incorporated better regulate their behaviour.

The Commission on Human Rights will investigate the claim and the ways government could respond. It has the power to judge how these corporations are performing against national and international human rights standards and recommend next steps.

CHR rules say investigations they conduct must be "fact finding in nature, and non-adversarial", and the government would not be obliged to act should the findings indicate human rights law was indeed being breached.

However, the CHR is charged with "monitor[ing] the Philippine government's compliance with international treaty obligations on human rights" - and investigations like this are exactly why this advisory body was established.

A new weapon in the battle to force decarbonisation

The Philippines, with its population of 100 million, is taking an internationally significant step in launching this investigation. Taking on the carbon majors in this way could trigger copycat investigations, continuing the wave of legal action for the climate. It expands what the world thinks is possible in the name of environmental justice.

And the timing is good, rolling out alongside the New York Attorney General's investigation of Exxon and Peabody.

This human rights investigation is a new weapon in the struggle to drive decarbonisation. A CHR declaration that the carbon giants are infringing international human rights law would have major implications for fossil fuel companies worldwide, and other carbon-hungry industries.

While the CHR's findings would not oblige The Philippines government to act, considered legal opinion showing that energy corporations are contravening human rights law would lend phenomenal pressure to the drive to phase out fossil fuels.

Emissions from BP, Shell, Exxon and the other energy majors are a primary driver of global warming, which is already taking life and livelihood from vulnerable populations. We will be following the CHR's investigation closely. It is time to hold these companies to account.

Ellen Baker is a journalist with the ClientEarth communications team. Previous experience includes a year at the International New York Times in Paris. In 2014 she was the editorial assistant and features writer for London sustainable food magazine Jellied Eel, run by charity Sustain, and she continues to copy edit OURS Magazine, an international development and culture publication based in Geneva.