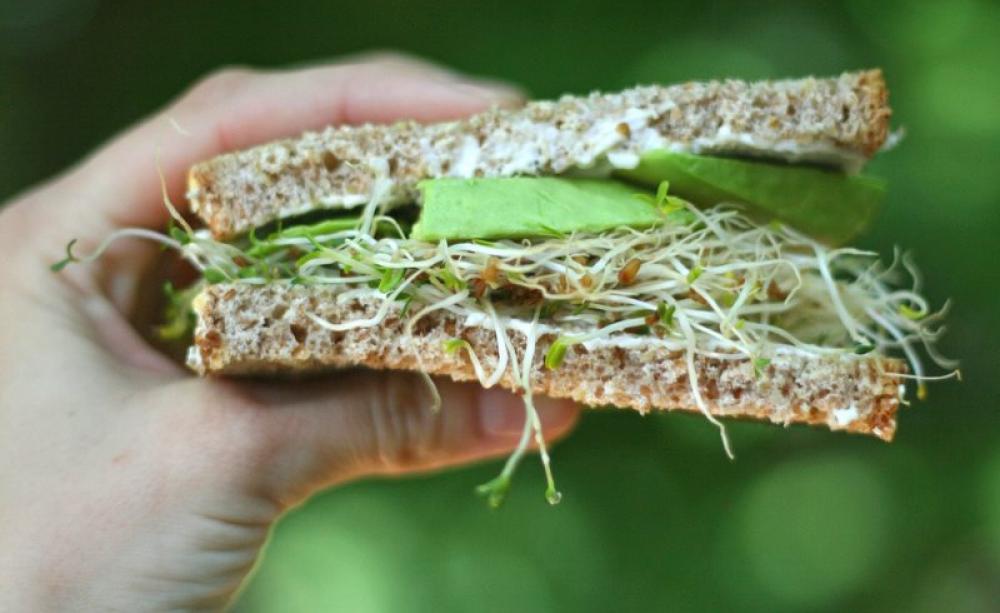 You want transgenes with that? Avocado Alfalfa Delight. Photo: Victoria Ristenbatt and Scott Redding via Flickr (CC BY-NC-SA).
A USDA study shows that a GM alfalfa has gone wild in alfalfa-growing parts of the West. This may explain GMO contamination incidents that have cost US growers and exporters millions of dollars - and it exposes the failure of USDA's 'coexistence' policy for GMOs and traditional crops.

What's needed now is not more studies to tell us in finer detail what we already know, but regulatory action. Yet USDA - which is embarrassingly subservient to the biotech industry - has failed to voluntarily enact a single restriction on GE crop growers.

The US Dept. of Agriculture (USDA) has long maintained that genetically engineered (GE) crops can co-exist with traditional and organic agriculture.

According to this 'co-existence' narrative, if neighboring GE and traditional farmers just sort things out among themselves and follow 'best management practices', transgenes will be confined to GE crops and the fields where they are planted.

The latest evidence refuting USDA's co-existence fairytale comes from a recently published study by a team of USDA scientists. The study involved Monsanto's Roundup Ready alfalfa, which, like most GE crops in the US is engineered to survive direct spraying with Roundup, Monsanto's flagship herbicide.

In 2011 and 2012, USDA scientist Stephanie Greene and her team scouted the roadsides of three important alfalfa-growing areas - in California, Idaho and Washington - for feral (wild) alfalfa stands. Because alfalfa is a hardy perennial plant, it readily forms self-sustaining feral populations that persist for years wherever the crop is grown.

Greene and colleagues found 404 feral alfalfa populations on roadsides. Testing revealed that over one-quarter (27%) of them contained transgenic alfalfa - that is, plants that tested positive for the Roundup Ready gene. They believe that most of these feral populations likely grew from seeds spilled during alfalfa production or transport.

However, the researchers also found clear evidence that the Roundup Ready gene was being spread by bees, which are known to cross-pollinate alfalfa populations separated by up to several miles. Their results suggested that "transgenic plants could spread transgenes to neighboring feral plants, and potentially to neighboring non-GE fields."

While they did not test this latter possibility, there is no doubt that non-GE alfalfa has in fact been transgenically contaminated - not just once, but on many occasions.

In 2013, a Washington State farmer's alfalfa was rejected by a broker after testing revealed transgenic contamination. In 2014, China rejected numerous US alfalfa shipments that tested positive for the Roundup Ready gene. Alfalfa exports to China, a major market that has zero tolerance for GE alfalfa, fell dramatically. US hay prices fell, and at least three US alfalfa exporters suffered many millions of dollars in losses.

Both the Washington State farmer and those who sold to the exporters intended to grow only traditional alfalfa. It is not clear how their produce became contaminated.

Besides cross-pollination from GE feral or cultivated alfalfa, possible explanations include inadvertent mixing during harvest or storage, or (most insidiously) transgenic contamination of the conventional alfalfa seed they planted.

What's needed now is not more studies to tell us in finer detail what we already know, but regulatory action. Yet USDA - which is embarrassingly subservient to the biotech industry - has failed to voluntarily enact a single restriction on GE crop growers.

Another problem highlighted is that weed control practices may give the feral GMOs a selective advantage: "Glyphosate resistant GE feral plants may increase through selection if glyphosate-only regimes are used in weed management, and may necessitate the need to change these practices."

A little GMO alfalfa can go a very long way

What makes the high (27%) GE contamination rate found in this study so remarkable is how little GE alfalfa produced it. USDA first approved Roundup Ready alfalfa in 2005, and it occupied just 1% of national alfalfa acreage in 2006. A federal court prohibited new plantings starting in 2007, but allowed what had already been planted to remain in the ground (an alfalfa stand is typically grown for about five years).

Because this study was conducted just a few months after the re-approval of GE alfalfa in 2011, all of the feral GE alfalfa the researchers detected arose from the comparatively few fields planted in 2005 and 2006. There is much more GE alfalfa being grown now (Monsanto says 30% of alfalfa seed sold is GE). So there is likely much more feral GE alfalfa today than is suggested by this study.

It's important to note that the study's major finding - that feral GE alfalfa is present and poses a contamination risk - has been known for at least six years. Oregon alfalfa seed grower Phillip Geertson presented USDA with documented evidence of feral GE alfalfa in Idaho and Oregon in 2009, but was ignored.

More broadly, USDA exhaustively discussed this and other modes of transgenic contamination in its voluminous 2010 Environmental Impact Statement (EIS) on 'Roundup Ready' alfalfa.

In fact, buried in that EIS is data showing still earlier episodes of transgenic contamination of alfalfa dating back to the crop's first commercial introduction in 2005.

What's needed now is not more studies to tell us in finer detail what we already know, but regulatory action. Yet the USDA - which is embarrassingly subservient to the biotechnology industry - has failed to voluntarily enact a single restriction on GE crop growers. This forces traditional farmers to bear the entire burden of preventing transgenic contamination.

The ineffectiveness of this policy is shown by contamination-induced losses of billions of dollars in corn exports to competitors like Brazil. It is also suggested by the absurd spectacle of the US (the world's leading corn and soybean producer) importing organic corn and soy from countries like Romania and India. Fear of transgenic contamination is one factor deterring more US farmers from meeting America's growing demand for organic foods.

Because of federal inaction, citizens have taken action to protect their traditional agriculture at the county level, and Center for Food Safety (CFS) has provided critical assistance to these efforts.

For instance, in 2014 voters in Jackson County, Oregon, overwhelmingly passed an ordinance prohibiting cultivation of GE crops in their county. CFS helped the County and its farmers fend off a lawsuit seeking to invalidate the Ordinance brought by two GE alfalfa growers with financial backing from the biotechnology industry.

Similar 'GE-free zones' have been created with CFS assistance in at least seven other counties in California, Washington, Hawaii and a second county in Oregon. CFS is also proud to support a new ordinance introduced in November of last year in Costilla County, Colorado, that would establish a GMO-Free Zone to protect locally bred heirloom maize from transgenic contamination.

Bill Freese is Science Policy Analyst at the Center for Food Safety.

This article was originally published by the Center for Food Safety.