Offshore wind powers ahead as prices drop 30% below nuclear 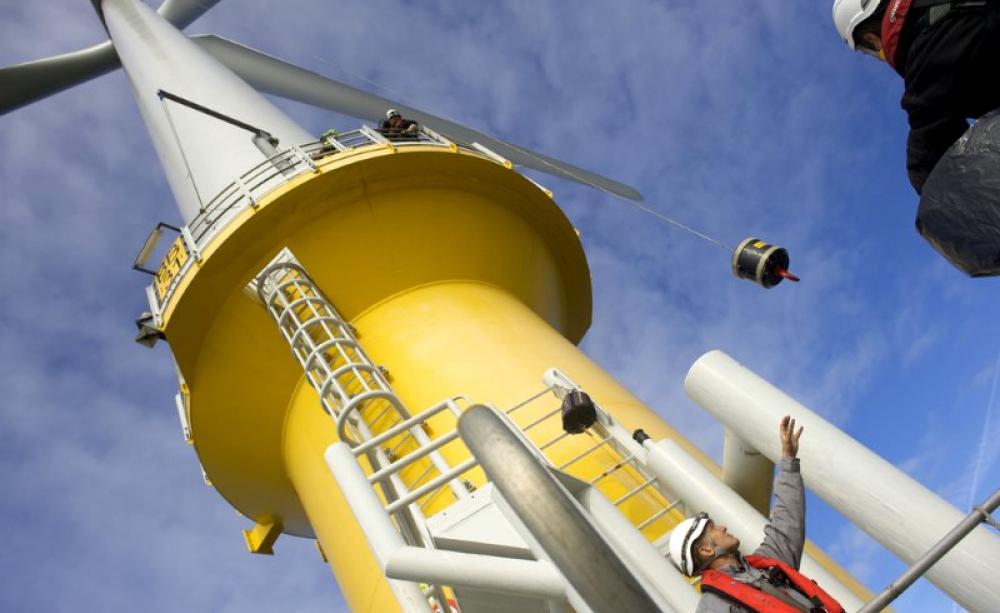 Offshore wind turbine under construction at Burbo Bank, North Sea. Photo: The Danish Wind Industry Association / Vindmølleindustrien via Flickr (CC BY-NC).
The cost of offshore wind power in the North Sea is 30% lower than that of new nuclear, writes Kieran Cooke - helped along by low oil and steel prices, reduced maintenance and mass production. By 2030 the sector is expected to supply 7% of Europe's electricity.

This tender goes beyond even the most optimistic expectations in the market. The €87 / MWh is significantly lower than anything we've previously seen. It now puts offshore wind in the same cost range as conventional power generation.

A building boom is underway offshore in Europe. Up to 400 giant wind turbines are due to be built off the northeast coast of the UK in what will be the world's largest offshore wind development.

Output from the Dogger Bank project will be 1.2 GW (gigawatts) - enough to power more than a million homes.

Next year, a 150-turbine wind farm off the coast of the Netherlands is due to start operating, and other schemes along the Dutch coast are in the works.

Denmark, Sweden and Portugal are major investors in offshore wind, and China has ambitious plans for the sector.

Wind farms - both onshore and offshore - are a key ingredient in renewable energy policy, and an important element in the battle against climate change.

WindEurope, an offshore wind industry group, says that at the present rate of installations it's likely Europe will be producing about 7% of its electricity from offshore wind by 2030.

By some calculations, all this building work would seem to make little economic sense. Fossil fuel prices are low on the world market, and constructing offshore wind farms several kilometres out at sea, in often treacherous conditions, has traditionally been an expensive business.

Despite this, the offshore wind industry insists it has a bright future: costs are coming down, and supporters say the sector is becoming ever more competitive. Ironically, the slump in the price of oil has been one factor driving down the price of offshore power.

Inactivity in the oil industry and the closure of many drilling projects in the North Sea and elsewhere has led to a big surplus of offshore installation vessels. As a result, costs for transporting turbines out to sea and other support work have dropped substantially.

Building and technical techniques have been refined and standardised over the years. Maintenance expenditure - which can account for up to 40% of the running cost of an offshore installation - has been reduced. The industry now uses larger 6MW turbines, which it says need less servicing, and in future it's likely a move will be made to 8MW models.

Costs have also dropped due to lower prices on the world market for steel, a major building component in offshore installations. And new methods have been adopted for laying foundations for pylons at sea. The industry says that as projects have grown in size, economies of scale have been achieved.

This tender goes beyond even the most optimistic expectations in the market. The €87 / MWh is significantly lower than anything we've previously seen. It now puts offshore wind in the same cost range as conventional power generation.

The cost of cables connecting the wind pylons to power networks onshore has also been reduced. Initially, cables were produced to operate at full capacity at all times, but new cables that are less bulky and less expensive are able to cope with the intermittent power produced.

Earlier this month, DONG Energy of Denmark, the world's largest offshore wind company, won a bid to build two wind farms 22 kilometres off the Dutch coast. The company says power will be produced for less than any other offshore scheme to date.

It is estimated that when the scheme is fully operational, electricity will cost €72.70 per megawatt hour (MWh) and €87 / MWh when transmission costs are included. At present, the cheapest offshore power is €103 MWh, generated by a wind farm off the coast of Denmark.

"It has been clear for some time that the costs of offshore wind are falling rapidly", says Giles Dickson, head of WindEurope. "This tender goes beyond even the most optimistic expectations in the market. The €87 / MWh is significantly lower than anything we've previously seen. It now puts offshore wind in the same cost range as conventional power generation."

The offshore industry does face problems. The majority of big projects in Europe - the main area of offshore wind activity - are backed by considerable government support, with developers receiving prices for power that are often well above wholesale market rates.

But significantly, the price of offshore wind has now fallen substantially below that of new nuclear power. The UK is trying (and so far, failing) to persuade French energy parastatal EDF to build a new nuclear power station at Hinkley C, paying it £92.50 / MWh (in 2012 money) for 35 years.

That's €122 / MWh in today's money for a nuclear MWh - about 40% more than Dong's offshore wind price. Or to turn it round the other way, new offshore wind is almost 30% cheaper than new nuclear. In addition most offshore wind contracts pay out for much less than 35 years - in the case of the UK, for just 15 years.

Political change might result in reductions in state support levels. For example, the UK's vote to leave the European Union has led to considerable uncertainty about government policy on wind and other renewable energy schemes following big cuts in support last year. The UK government also appears dedicated to a 'nuclear at any cost' policy.

Offshore wind also faces competition from onshore power generation, which is considerably cheaper than offshore wind. However many countries favour the offshore option because of its lower visual and auditory impact.

Offshore wind's greatest renewable competitor is probably solar power, which has seen dramatic cost reductions in recent years. But the two technologies make a harmonious fit - the two together producing a smoother electricity supply curve, and one that more closely matches demand, than either alone.

Kieran Cooke writes for Climate News Network, where this article was originally published.

This article contains some additional reporting by The Ecologist.