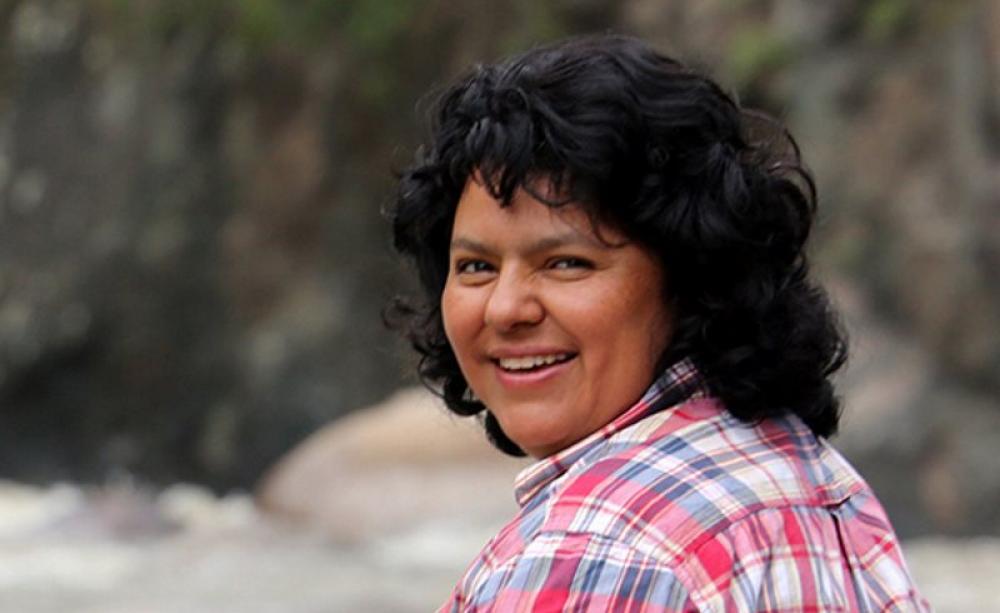 Everywhere in the world where Indigenous and land-based peoples defend the earth and their ways of life, they are persecuted, dispossessed, and, as in the case of Berta and hundreds of others in the Honduran resistance movement, murdered in cold blood.

The co-founder of the Council of Indigenous Peoples of Honduras (Copinh) was shot dead by gunmen who entered her home in La Esperanza at around 1am on Thursday.

Some reports say there were two killers; others suggest 11. They escaped without being identified, after also wounding her brother.

Police told local media the killings occurred during an attempted robbery, but the family were certain that it was an assassination prompted by Cáceres's high-profile campaigns against dams, illegal loggers and plantation owners.

"I have no doubt that she has been killed because of her struggle and that soldiers and people from the dam are responsible, I am sure of that. I hold the government responsible", her 84-year-old mother said on radio Globo at 6.

Karen Spring, a friend of Cáceres', said it was unclear how many assailants had participated in the attack, but that Cáceres was hit by at least four bullets.

Members of Copinh escorted the body as it left the house on the way to the morgue in the provincial capital. About a hundred of them also marched from the public prosecutor's office to the police station, where they demanded an independent international investigation.

Others headed to La Esperanza to take part in the wake. "People here are still in shock that Berta is dead," Spring told the Guardian. "But they are very clear that they will continue their struggle to honour Berta."

A hero activist despite the dangers

Last year, Cáceres - who is a member of the Lenca indigenous group, the largest in Honduras - was awarded the Goldman Environmental Prize for her opposition to one of Central America's biggest hydropower projects, the Agua Zarca cascade of four giant dams in the Gualcarque river basin.

The campaign has held up the project, which is being built by local firm DESA with the backing of international engineering and finance companies, and prompted the withdrawal of China's Sinohydro and the World Bank's private sector arm, the International Finance Corporation. Cáceres had called for other foreign partners, including the Dutch Development Bank, the Finnish Fund for Industrial Cooperation and German companies Siemens and Voith, to pull out.

She has also won plaudits from international NGOs for standing up to powerful landowners, a US-funded police force, and a mercenary army of private security guards in the most murderous country in the world for environmental campaigners.

Everywhere in the world where Indigenous and land-based peoples defend the earth and their ways of life, they are persecuted, dispossessed, and, as in the case of Berta and hundreds of others in the Honduran resistance movement, murdered in cold blood.

In an interview with the Guardian at the time of her award, Cáceres was realistic about the risks she faced, but said she felt obliged to fight on and urged others to do so. "We must undertake the struggle in all parts of the world, wherever we may be, because we have no other spare or replacement planet. We have only this one, and we have to take action," she said.

The dangers appear to have increased in recent weeks. After a Copinh march in Río Blanco on 20 February, she and other participants were confronted by the army, police, local mayor and employees of the dam company. Several were detained and some threatened, the council said in a statement.

It was not the first time. Cáceres previously said she had received warnings that she would be raped or murdered if she continued her campaigns. There have also been past reports that hitmen were hired to assassinate her.

Honduras - failing to protect its own

Honduras is a perilous place for activism. Cáceres's fellow Copinh leader Tomás García was shot dead by a military officer in a protest in 2013. Several others have been killed this year, according to the council. Cáceres had recently moved home because she felt the new house in La Esperanza would be safer.

Between 2010 and 2014, 101 campaigners were killed in Honduras, a higher death toll relative to population than anywhere else, according to the study How Many More? by NGO Global Witness. It said a disproportionately high number of them were from indigenous communities who resisted development projects or the encroachment of farms on their territory.

The United Nations special rapporteur for indigenous rights, Victoria Tauli-Corpuz, who met Cáceres last November, said she was "saddened and horrified" by the news. "This shows the high level of impunity in Honduras. Beyond the high homicide levels in society, there is a clear tendency for indigenous campaigners and human rights activists to be killed", said Tauli-Corpuz, whose report on the country will come out in a few months.

She noted the Inter-American Commission for Human Rights had raised concerns about Cáceres's safety with the Honduran president, Juan Orlando Hernández, last year and formally called on the government to apply 'precautionary measures'.

"This meant the government had to protect her", Tauli-Corpuz said. "Yet she was assassinated just like that. If someone like her suffers in this way, then what chance is there for others who campaign for the environment and human rights?"

Jorge Alcerro, chief of staff for the Honduran president, Juan Orlando Hernández, said that security forces would "use all means to find the killers", but he did not explain why she had no police protection at the time of her murder.

Billy Kyte, a campaigner at Global Witness, paid tribute to Cáceres for her "incredible courage" and said the government - which is behind many of the controversial projects - must reverse the alarmingly murderous trend in Honduras:

"The shocking news of Berta's killing is a dramatic wake-up call for the Honduran state. Indigenous people are being killed in alarming numbers just for defending their rights. The Honduran state must act immediately to hold the killers to account and protect Berta's family and colleagues."

Jeff Conant, international forests campaigner at Friends of the Earth US, also expressed his sadness and anger: "The killing of Berta Cáceres is a horrible shock - but, tragically, it is not a surprise.

"Everywhere in the world where Indigenous and land-based peoples defend the earth and their ways of life, they are persecuted, dispossessed, and, as in the case of Berta and literally hundreds of others in the Honduran resistance movement, murdered in cold blood. We grieve her loss, we demand a full investigation and accountability - and we call for redoubled efforts to support frontline struggles to defend lands and indigenous territories, everywhere."

David Gordon, executive director of the Goldman Prize, echoed these comments: "Berta's bravery in the face of overwhelming repression will be a rallying call for environmental activism in Honduras," he said in a statement.

Naomi Klein, the Canadian author and environmental campaigner, tweeted: "Devastating news. Berta was a critical leader and fierce land defender. Part of a global wave of such attacks."

Jonathan Watts is the Latin America Correspondent for the Guardian.

This article was originally published by the Guardian and is republished here via the Guardian Environment Network. some additional reporting by The Ecologist.